A CASE OF DISSEMINATED GONOCOCCAL INFECTION IN A PATIENT WITH SEVERE SYSTEMIC LUPUS ERYTHEMATOSUS, LUPUS NEPHRITIS

Case Presentation: A 31-year-old woman with systemic lupus erythematosus (SLE) with Class IV lupus nephritis presented to the emergency department (ED) from the shelter two weeks after completing induction therapy with cyclophosphamide with a complaint of severe right knee pain and swelling. She was recently in the ED for severe left knee pain, which arthrocentesis performed at that time suggested septic arthritis, however cultures were negative, and she was discharged on high-dose steroids for suspected lupus flare. Physical examination revealed severe right hand and wrist swelling accompanied by erythema, tenderness, and limited range of motion, along with bilateral tender knee effusions. Laboratory studies were significant for elevated ESR, CRP, normal complements, and her anti-dsDNA antibody was relatively lower than baseline. Due to the clinical findings suggesting a migratory arthritis, in addition to a bedside right hand ultrasound suggesting tenosynovitis, she was empirically started on antibiotics with a high suspicion for disseminated gonococcal infection (DGI). A right knee arthrocentesis was suggestive of septic joint despite being on antibiotics. Gonococcal and chlamydia swabs were obtained, and antibiotics were changed to ceftriaxone. Urethral and urine gonococcal nucleic acid amplification testing (NAAT) both detected N. gonorrhoeae, however, synovial fluid gonococcal NAAT was negative. Patient clinically improved over a few days.

Discussion: Gonorrhea is the second most commonly reported sexually transmitted disease in the United States and greater than 5% of people between the ages of 18-35 are asymptomatically colonized by Neisseria gonorrhoeae. The bacterium often initiates infections at mucosal surfaces and commonly causes an asymptomatic infection in women. Patients with SLE are presumed to be at an increased risk for developing opportunistic infections due to hypocomplementemia, an impaired reticuloendothelial system, and treatment with immunosuppressants. Other risk factors, in addition to having SLE, include concomitant renal disease, young age, and being female. In our case, serology was not indicative of a lupus flare, and there was an inadequate response to steroids indicating that another process was occurring. The constellation of findings, in addition to a positive urethral swab for gonorrhea, led to the suspicion that a long-standing asymptomatic N. gonorrhoeae infection was reactivated after induction therapy and recent high-dose steroid use.

Conclusions: Patients with SLE undergoing treatment with immunosuppressants are at an increased risk for opportunistic infections, including N. gonorrhoeae. Blood cultures, synovial fluid cultures and gram stains are commonly negative but with the constellation of physical examination findings, laboratory studies, and imaging, it is important to differentiate a lupus flare from a serious infection.

IMAGE 1: A comparison of patient's hands on presentation 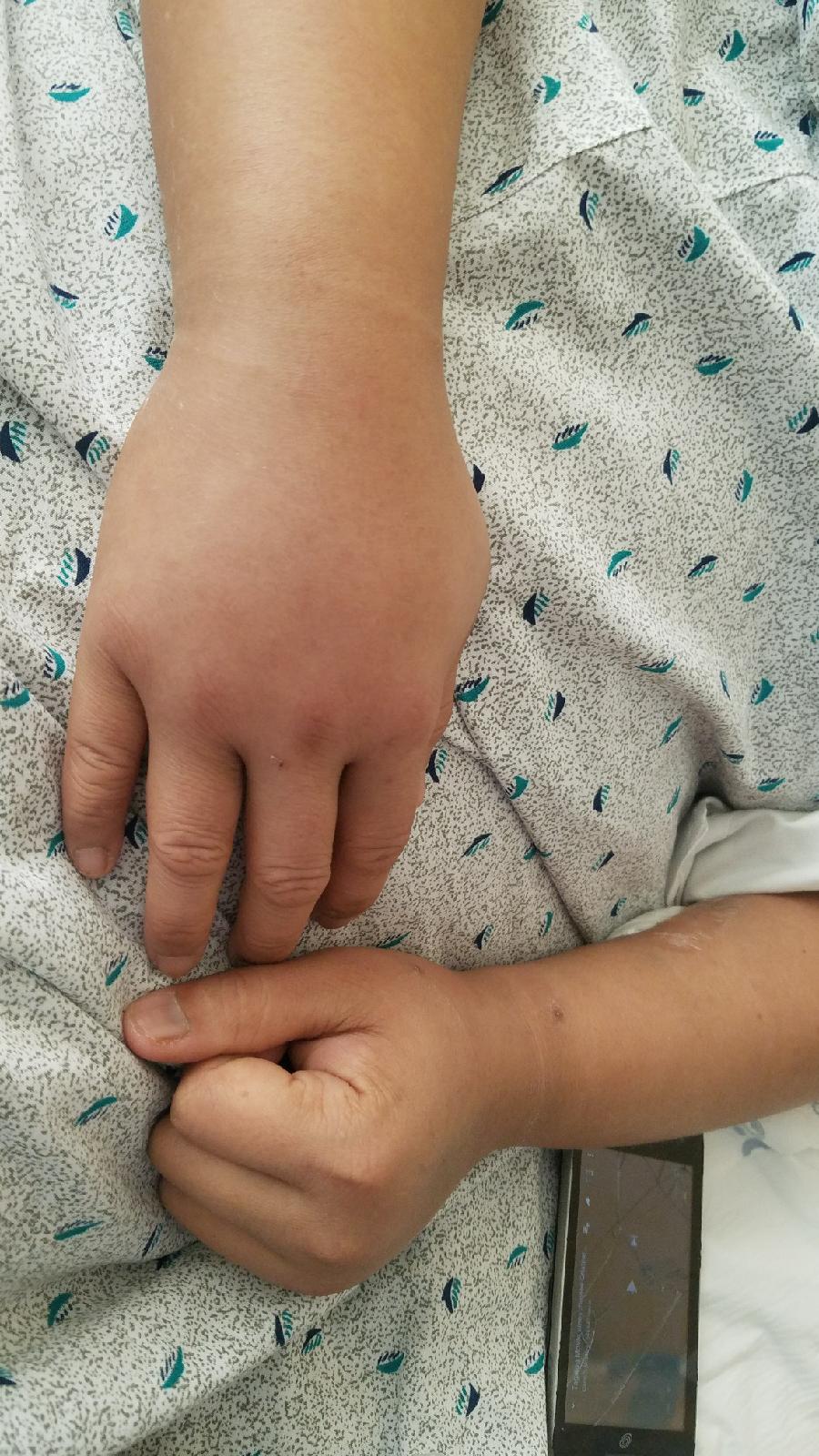 A CASE OF DISSEMINATED GONOCOCCAL INFECTION IN A PATIENT WITH SEVERE SYSTEMIC LUPUS ERYTHEMATOSUS, LUPUS NEPHRITIS.