A Painful Rash of Acute Onset

A 47‐year‐old woman presented with 2 days of painful rash over her bilateral thighs and buttocks. Six days prior, ultrasonography had revealed bilateral lower‐extremity deep vein thrombosis, and she had received intravenous unfractionated heparin (UFH) and warfarin 10 mg daily. On the third day of warfarin therapy, the international normalized ratio (INR) was 2.3, and heparin was discontinued. That day, a nontender, purpuric rash was first noted on her bilateral shins. On the following day the INR was 4.6, and warfarin therapy was discontinued. The patient was discharged to home off warfarin and with close follow‐up, but she presented later that night with a markedly worsened, pruritic, painful rash over her thighs and buttocks. The patient had a history of rheumatoid arthritis and membranoproliferalive glomerulonephritis (MPGN) with nephrosis (prior daily urinary protein loss of 16 grams). There was no family history of thrombophilia. Vital signs were normal except for moderate hypertension. There were erythematous reticular patches over her anterolateral thighs and buttocks, left grealer than right, and a central eschar on the left buttock. Relevant laboratory data included: INR 6.9, lactate 2.5 mmol/L, and creatinine 3.8 mg/dL (with a previous baseline of 2.3 mg/dL). The patient was initially given intravenous UFH, vitamin K, and fresh frozen plasma. The INR decreased to 1.5, and rash progression ceased. Serologic assays for autoimmune disease were negative except for a rheumatoid factor titer of 1:32. Cryoglobulin level was less than 1%. Feasible tests for a thrombophilic state, including genetic testing of factors II and V, were negative. Biopsy of the necrotic patch revealed leukocyloclastic vasculitis with no immune deposits, which was consistent with warfarin‐induced skin necrosis (WISN). The patient received UFH throughout her hospital stay and was discharged on enoxaparin therapy but later required debridement and skin grafting therapy. 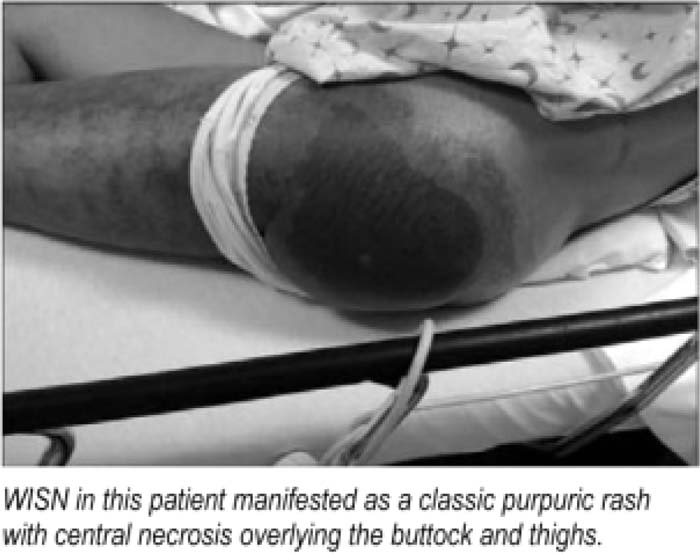 Because WISN most often occurs in hospitalized patients and is avoidable with proper practice when initialing warfarin. Hospitalists are in ideal position to prevent it. WISN is a severe skin rash characterized by thrombosis of postcapillary venules and resulting skin necrosis, usually overlying lipomatous tissues such as thighs or buttocks. It is most commonly reported in patients who receive loading doses of warfarin without concomitant heparin. Initial warfarin therapy depletes proteins C and S before fully depleting factors II, VII, IX, and X, thereby inducing transient, paradoxical thrombophilia. Because WISN is a condition of microthrombosis, patients with underlying thrombophilia, such as this patient with MPGN and nephrosis, are at highest risk.

To reduce the incidence of WISN when initialing warfarin, hospitalists should identify patients with underlying thrombophilia. These patients should receive lower initial warfarin doses and adequate overlap with UFH therapy.

A Painful Rash of Acute Onset.