Case Presentation: A 50-year-old woman with common variable immunodeficiency (CVID) presented to the hospital with worsening dyspnea and persistent fevers. She was febrile to 102F with an oxygen saturation of 91% on room air, and decreased breath sounds at the lung bases. Labs showed pancytopenia and elevated aminotransferases. Chest CT revealed diffuse ground-glass opacities, hilar and mediastinal lymphadenopathy, a right lower lobe consolidation, and a pleural effusion (Figure 1). She was started on empiric broad-spectrum antibiotics without improvement. An infectious workup was unremarkable. Bronchoscopy with transbronchial biopsy was performed showing dense bronchial wall lymphoid infiltrates with non-caseating granulomas. Lymph node biopsy showed no evidence of lymphoma. A liver biopsy revealed a granulomatous, histiocytic process. She had a mildly elevated angiotensin-converting enzyme (ACE) level.
Her clinical, radiologic, and pathologic findings were consistent with multiorgan granulomatous involvement of CVID-associated systemic granulomatous and lymphocytic interstitial lung disease (GLILD). Rituximab and azathioprine were started with resolution of her fevers and hypoxemia and stabilization of her disease.

Discussion: GLILD is a rare form of interstitial lung disease (ILD) involving granulomas and lymphoproliferation. It is a non-infectious complication of CVID, a primary immunodeficiency characterized by low immunoglobulin levels. As fever and dyspnea in hospitalized patients with CVID are common, a broad differential including acute and chronic infections, inflammatory disorders, and lymphoma should be considered. CVID patients with GLILD have reduced survival compared with patients without this disorder. Those with GLILD may have extrapulmonary disease involving the liver and lymph nodes.

While our patient’s findings of granulomas, multiorgan involvement, and elevated ACE may suggest sarcoidosis, the clinical presentation, radiology, and histology can differentiate GLILD from sarcoidosis. Association with hypogammaglobulinemia, spontaneous remission, resistance to steroids, as well as mid/lower lung involvement are characteristic features. Distinguishing histologic findings in GLILD include lymphoproliferative pneumonitis and follicular bronchiolitis. As such, lung pathology is critical for definitive diagnosis. While there is no clear standard of treatment, patients have shown improvement on a combination of azathioprine and rituximab.

Conclusions: Fever and dyspnea are common in hospitalized patients with CVID. Hospitalists must maintain a broad differential including typical and atypical infections, inflammatory disorders, and malignancy. GLILD is a rare form of ILD with granulomatous and lymphoproliferative characteristics associated with CVID that can present similarly to sarcoidosis. While the clinical presentation and radiologic findings can be suggestive, a lung biopsy is needed for definitive diagnosis. 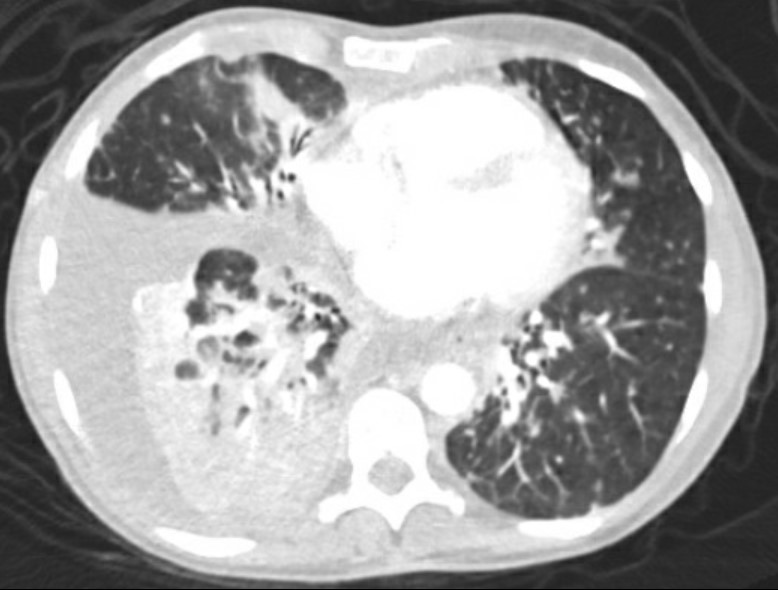