Further evaluation of the nausea and vomiting including abdominal CT scan, abdominal ultrasound and gallbladder scintigraphy were unrevealing. Fluoroscopic small bowel follow through showed mild diffuse dilatation of the small bowel and delayed small bowel transit time without evidence of high-grade small bowel or gastric outlet obstruction. Subsequently the patient underwent upper endoscopy showing retained bilious fluid in the stomach. In the third portion of the duodenum, the lumen was obstructed by an extrinsic compression (Figure 1A-B). A nasogastric tube was placed to wall suction, resulting in resolution of the patient’s nausea and vomiting. Following upper endoscopy, review of the patient’s prior CT scan and fluoroscopic imaging confirmed compression of the third portion of the duodenum (Figure 2), most likely from the patient’s aorto-SMA bypass. While the patient had no recurrent emesis while on nasogastric suction, she passed away several days later due to sepsis and multi-organ failure.

SMA syndrome is a rare and often elusive cause of recurrent nausea and vomiting. Compression of the third portion of the duodenum between the superior mesenteric artery anteriorly and the aorta posteriorly results in upper intestinal obstruction, often in the setting of loss or absence of the mesenteric fat pad. To our knowledge SMA syndrome has not been reported in a patient with an aorto-SMA bypass. In our patient, SMA syndrome was not initially suspected. However, following upper endoscopy, review of the patient’s prior imaging confirmed the diagnosis.

We describe an unusual case of SMA syndrome in a patient with an aorto-SMA bypass. Accurate diagnosis was challenging and required correlation of radiographic studies with the findings of upper endoscopy.  We believe that, while rare, SMA syndrome should be considered in the differential diagnosis of patient’s with aorto-SMA bypass presenting with unexplained nausea and vomiting. 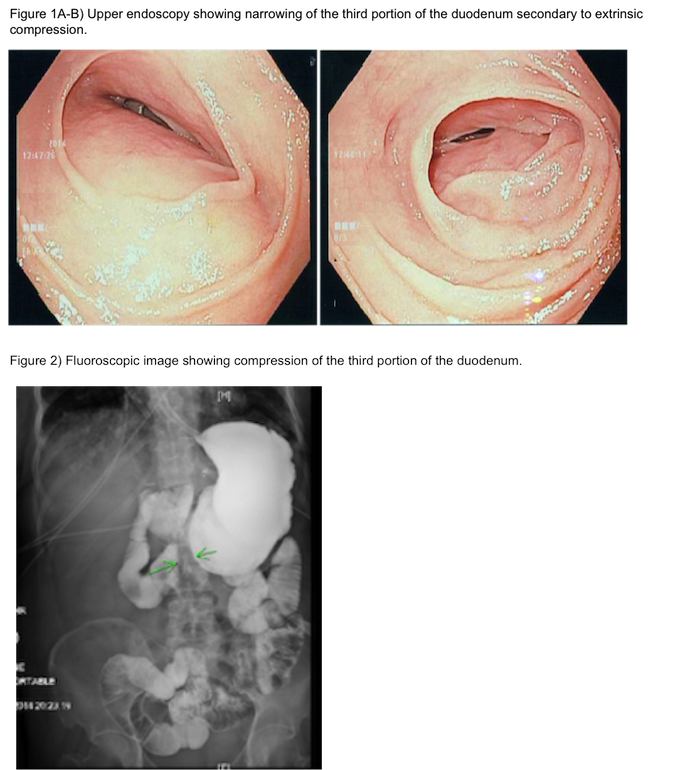 An Unusual Case of Recurrent Nausea and Vomiting in a Patient with Mesenteric Vascular Disease.