Catatonia As a Constituent of Sickle Cell Pain Crisis

On examination vitals were stable but she was in moderate distress due to pain. Examination of cardiovascular, respiratory and gastrointestinal systems was within normal limits. She had diffuse muscular tenderness in all extremities consistent with SCD pain crisis. She was alert, fully oriented with normal strength and tone in all extremities. Sensation and cranial nerves were intact along with normal gait and coordination. Labs revealed a Hematocrit of 16%, WBC count 13000 per mm3, and platelet count of 342,000 per mm3. Basic metabolic panel was within normal limits. Reticulocyte count was elevated at 0.372 x 106 /mm3. Chest x-ray showed no acute cardiopulmonary disease.

The patient was admitted with the impression of Vaso-occlusive pain crisis due to SCD and was started on intravenous fluids and Hydromorphone through patient-controlled analgesia pump with adequate pain control. She was also transfused two units of packed red blood cells with improvement in hematocrit to 25%. She initially responded well to therapy, so her pain medications dosage was reduced. On day three of admission she complained of visual hallucinations and later started showing signs of immobility, mutism, staring and negativism. A preliminary diagnosis of catatonia was established and she was given a trial of slow intravenous Lorazepam push. During the push she sat up and started talking with immediate return of her mental status to baseline. Her catatonic symptoms recurred the next day and again she responded dramatically to intravenous Lorazepam therapy. She was started on scheduled dose of oral Lorazepam with complete resolution of her symptoms. She was transferred to a psychiatric facility upon discharge.

Discussion: Catatonia can occur in association with psychiatric or general medical disorders and can also potentially be caused or exacerbated by treatment of these conditions. Above we report a rare case of catatonic state precipitated by SCD vaso-occlusive pain crisis. This case illustrates the importance of diagnosing and treating catatonia in SCD patients especially among those with substantial underlying psychiatric disorders.

Conclusions: In patients with SCD and psychiatric illness, it is important to recognize catatonia which can complicate the vaso-occlusive pain crisis. 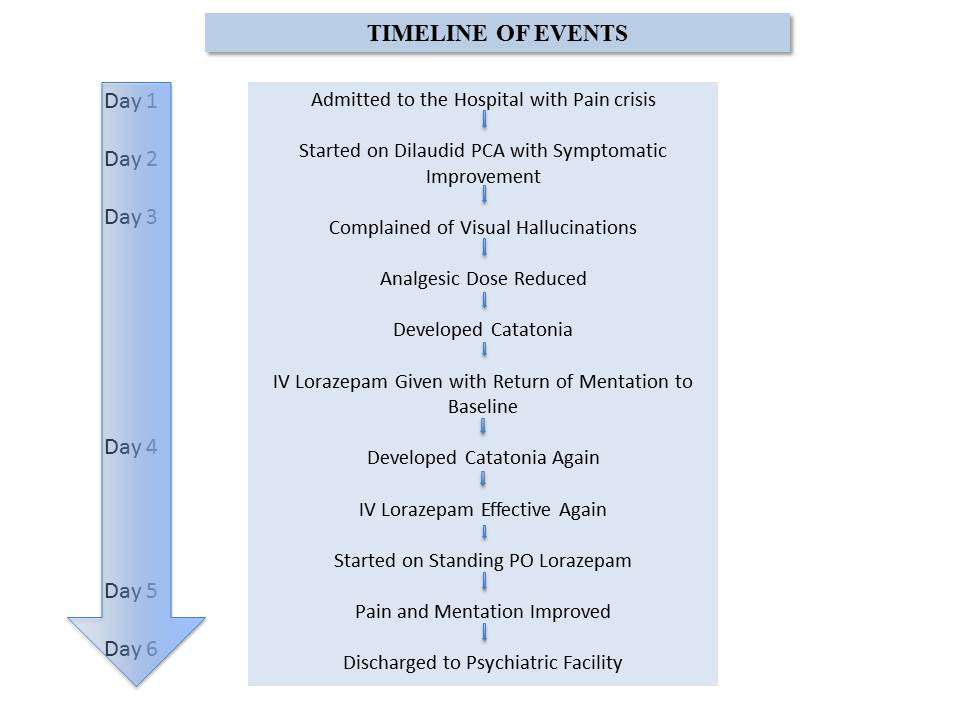 Catatonia As a Constituent of Sickle Cell Pain Crisis.