Diffuse Alveolar Hemorrhage (Dah) Secondary to Amiodarone and Apixaban Use: A Case Report

Diffuse alveolar hemorrhage is a clinical syndrome resulting from pulmonary capillaritis, bland pulmonary hemorrhage, or diffuse alveolar damage.1 DAH has been reported as a rare adverse event with amiodarone therapy, warfarin therapy, and as a potential complication with rivaroxaban therapy. 2, 3, 4

We present the case of a seventy-six year old Hispanic female with a medical history significant for heart failure with preserved ejection fraction, obstructive sleep apnea with associated pulmonary hypertension and right heart strain, type two diabetes mellitus, stage four chronic kidney disease, gastroesophageal reflux disease, chronic anxiety, dementia, and hypothyroidism who had presented with complaints of atypical chest pain, shortness of breath, and anxiety. Chest x-ray performed at admission showed patchy asymmetric infiltrates suggestive of worsening heart failure. The patient was then aggressively diuresed for pulmonary edema and presumed worsening heart failure. Thereafter, her hospitalization course was complicated by new onset acute non-valvular atrial fibrillation. Rhythm control with amiodarone was then initiated. Given her high risk for stroke based on CHADS-VASc score of six, anticoagulation was initiated with apixaban. Six days later, the patient developed respiratory failure due to acute respiratory distress syndrome (ARDS) confirmed by extensive bilateral consolidation on chest x-ray. During intubation, gross blood was noted to be lining the endotracheal tube. Amiodarone and apixaban were then held due to suspicion for alveolar hemorrhage. Systemic steroids were also initiated to prevent relapse and extensive continued pulmonary fibrosis. She was maintained on ventilator support with a strategy to treat underlying ARDS secondary to DAH. After four weeks of unsuccessful withdrawal of ventilatory support, the patient required tracheostomy and was then transferred to an inpatient rehabilitation facility.

DAH is usually due to systemic disease, vasculitis or both, but provoked causes are primarily due to medications such as an anticoagulant, D-penicillamine, nitrofurantoin, amiodarone, propylthiouracil, cocaine or sirolimus.5 DAH secondary to amiodarone remains a diagnosis of exclusion, considered only once other mechanisms of disease have been thoroughly explored and eliminated.

Amiodarone monotherapy has been associated with DAH, and the concurrent anticoagulant effect of apixaban may have increased her risk of bleeding. The potential pharmacokinetic drug interaction between amiodarone and apixaban or the patient’s diminished renal function, whether independent or additive, cannot be excluded as contributing factors in this case of DAH. 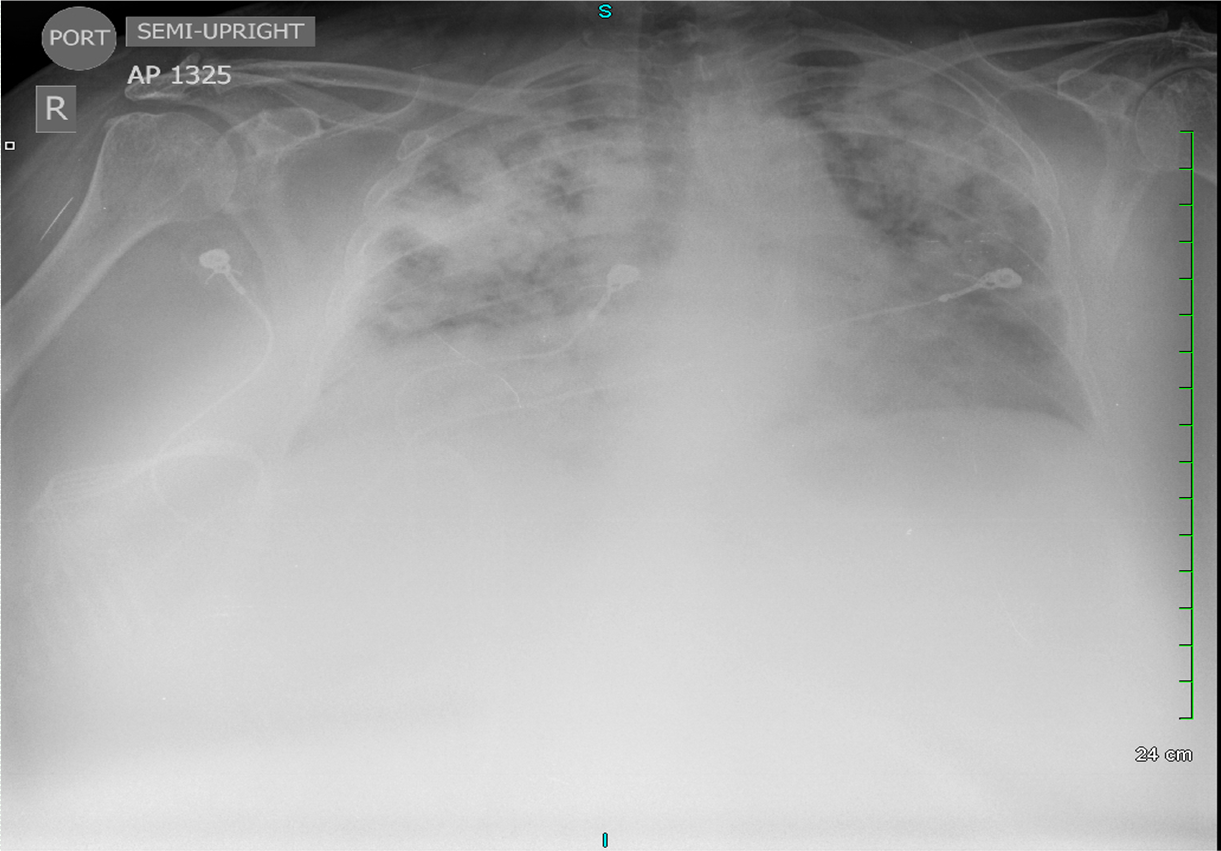 Diffuse Alveolar Hemorrhage (Dah) Secondary to Amiodarone and Apixaban Use: A Case Report.