Discussion: CAE is characterized by dilation of diffuse segment(s) of the coronary arteries to at least 1.5 times the normal diameter. CAE is typically asymptomatic and incidentally discovered during cardiac catheterization or other imaging of the cardiac vessels, and the incidence has been reported to be between 0.3%-5%. The RCA is most commonly affected, followed by the LAD. The etiology is likely multifactorial. CAE is strongly associated with atherosclerotic disease, hypertension, and dyslipidemia. Connective tissue diseases, vasculitis, and iatrogenic vessel injury have also been implicated.
Patients with CAE have a higher incidence of major adverse cardiac events (MACE), likely due to increased turbulent flow, stasis, and endothelial dysfunction in the ectatic vessels. In one study, patients who presented with myocardial infarction (MI) and were found to have CAE had a 3.25 fold greater risk of recurrent MACE after 49 months, compared to similar patients without CAE.
Evidence to guide management of CAE is still scarce. One retrospective study has found that warfarin monotherapy significantly decreased adverse cardiac events in CAE patients compared to no anticoagulation. Another study showed that dual antiplatelet therapy halved the incidence of cardiac events in patients with CAE, compared to no anticoagulation.

Conclusions: Coronary artery ectasia is relatively uncommon. Patients with CAE are at greater risk for MACE and will likely benefit from anti-coagulation; however, further studies are needed to determine the optimal anticoagulation strategy. 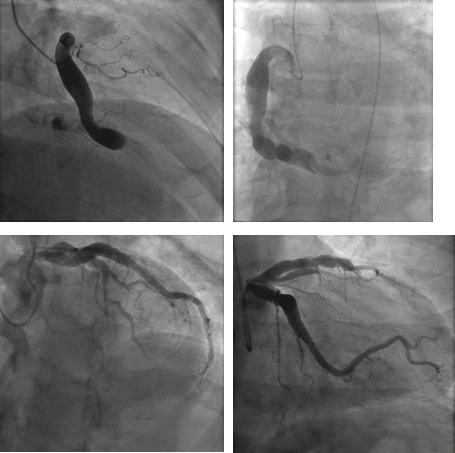