Case Presentation: An 81-year-old female with history of atrial fibrillation and bioprosthestic mitral valve replacement on warfarin presented after INR was reported as 6.3 and increased dyspnea. Physical exam was non-significant but lab findings showed a white blood count of 13.5 k/μl (4.0-11.0 k/μl), Hemoglobin 10.8 g/dl(12-15.3 g/dl), Platelets 285 k/μl(150-450k/μl). CT chest without contrast showed chronic diffuse emphysema and reidentified a spiculated left upper lobe mass 0.7 x 0.6 cm (previously 0.4 x 0.5 cm). Warfarin was held and IV Vitamin K 5 mg was given. INR was 1.4 the next day and low dose warfarin was resumed. She was also started on empirical antibiotics as her respiratory status worsened.Her platelets on 4th day of admission dropped by >50% to 127. A peripheral smear showed no schistocytes but her Hb dropped to 7 g/dl. Fibrinogen was 147mg/dl (163-463md/dl), INR 1.3, haptoglobin 86mg/dl (44-215mg/dl), LDH 593 IU/L(140-271IU/L) and total bilirubin 0.4mg/dl(0.0-1.0 mg/dl). On day 7 in lieu of worsening respiratory status a CT Angiogram of chest was done which revealed multiple subsegmental PE and significant pleural effusion. A guided thoracentesis was done and drained 920 cc of sanguinous fluid. Later the same day, her mental status degraded and CT head showed signs of right MCA: M1 occlusion. On day 9 her lung fluid cytology revealed multiple malignant cells and on same day her left lower extremity turned blue concerning for acute limb ischemia. Fibrinogen and INR also worsened and was started on heparin drip. Unfortunately, the patient on same day had cardiac arrest and expired. The tumor cells came back positive for TTF-1 and negative for NAPSIN, GATA-3, CALRETININ AND CK ⅚, consistent with metastatic adenocarcinoma of lung primary.

Discussion: DIC is widespread hypercoagulable state that leads to micro- and macrovascular clotting and compromised blood flow, ultimately resulting in multiple organ dysfunction syndrome (MODS) and risk of severe bleeding due to consumption of platelets and clotting factors. It is commonly a complication of infection, trauma, obstetric process or cancer. DIC may rarely be the presenting feature of an undiagnosed malignancy. It may present in 3 different phenotypes making its diagnosis difficult. Firstly, ‘procoagulant’ form, where excess thrombin generated causes thrombosis and manifest with thrombotic features. Secondly, ‘hyperfibrinolytic’ form, where activation of the fibrinolytic system clinically presents as bleeding. Lastly, ‘subclinical’ form, where the amounts of thrombin and plasmin generated do not cause obvious clinical manifestations but can be reflected in laboratory markers of coagulation or fibrinolysis activation. Many studies have shown that patients with adenocarcinoma are at a very high risk of DIC, especially in lung adenocarcinoma, due to the procoagulant mucin in the cancer cells. Our patient with evidence of pulmonary embolism, stroke and acute limb ischemia presented with thrombotic features of DIC. And the pleural fluid analysis was consistent with metastatic adenocarcinoma of lung primary.

Conclusions: Early diagnosis and identification of underlying condition is the key to reduce mortality in these patients with DIC. It can often be challenging to establish the underlying cause, especially if the patient is on blood thinners or has other risk factors for bleeding/thrombosis. Malignancy should always be considered in laboratory findings of subclinical DIC, especially without overt cause and with risk factors for lung cancer.

IMAGE 1: Trend of Platelet and Fibrinogen 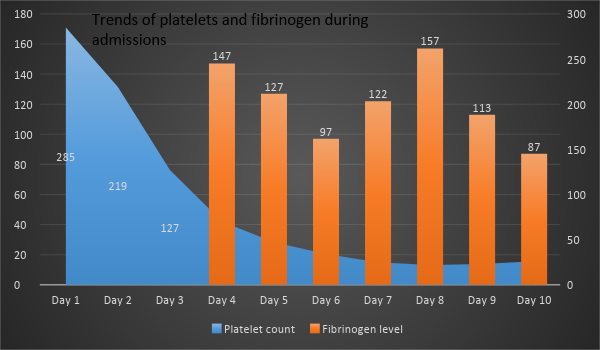 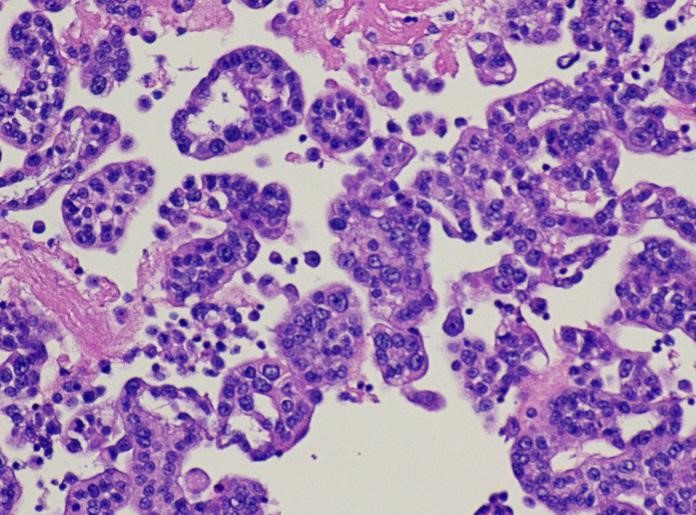