Drug Reaction with Eosinophilia and Systemic Symptoms If the Dress Fits

Adverse drug reactions are a common occurrence.  However, drug reaction with eosinophilia and systemic symptoms (DRESS) is unusual.  This case is even rarer because of the number of organ systems involved (liver, kidney, muscle, brain).  Other disease processes with similar presentation include sepsis, autoimmune, hypereosinophilic syndromes, and malignancy.

An important key to DRESS is the two to six weeks of time latency from initiation of causative medication to symptom onset. Drugs commonly associated include phenytoin and carbamazepine anticonvulsants, sulfamethoxazole and minocycline antibiotics, and allopurinol.  Drug immune response and herpes virus reactivation are considered important components in the pathogenesis.  After drug withdrawal the average recovery time is six to nine weeks but may last several months.

Drug reaction with eosinophilia and systemic symptoms can mimic other conditions that may cause rash and organ dysfunction.  This can lead to misdiagnoses and unnecessary treatments. DRESS may cause potentially life threatening hypersensitivity reaction if not recognized early and lead to delayed withdrawal of inciting medications.  The purpose of this case is to increase clinician awareness of a dangerous drug reaction that presents with unusual manifestations. 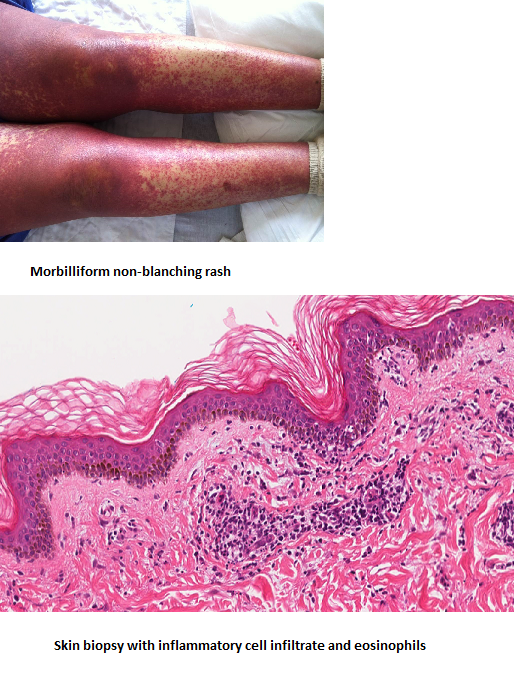 Drug Reaction with Eosinophilia and Systemic Symptoms If the Dress Fits.