A 57-year-old African-American man presented with a pruritic rash and fever for two days. Past history was significant for chronic dermatitis for 9 months that initially involved the head and neck, which was symptomatically managed. This was complicated by intermittent secondary bacterial cellulitis that was managed with topical steroids and antimicrobials. Two weeks prior to admission, he was started on methotrexate for his chronic dermatitis. His rash worsened significantly and he presented to our center for further care. The pruritic rash initially started in the groin with rapid progression to the head and neck. Newer lesions were developing over his hands and trunk at the time of presentation. Examination revealed maculo-papular rash with vesicles, superficial crusting and serous discharge over head, neck and genital areas (Images). Round shallow ulceration was noted in areas of prior vesicle formation. Examination was unrevealing for corneal and neurological involvement. Laboratory parameters revealed Staphylococcus agalactiae in blood cultures and elevated inflammatory markers. A clinical diagnosis of eczema herpeticum (EH) was made and he was started on intravenous (IV) acyclovir. He was started on IV antimicrobials that were later deescalated to oral therapy after availability of sensitivity patterns. Herpes Simplex Virus-1 (HSV-1) polymerase chain reaction (PCR) was positive from a vesicle swab and skin biopsy revealed chronic superficial dermatitis. He was transitioned to oral valacyclovir after three days and continued on antiviral medications for 10 days. He showed rapid improvement and was asymptomatic at one-month follow-up.

First described in 1887 as ‘Kaposi-Juliusberg varicelliform eruptions’, EH refers to disseminated HSV infection in atopic dermatitis. Other viruses such as vaccinia and Coxsackie A16 and other skin conditions such as pemphigus foliaceus, mycosis fungoides, Darier’s disease, Hailey-Hailey disease and ichthyosis vulgaris have also been reported. Hyper IgE, skin barrier disruption, high T-helper cells and low interferon-gamma have been implicated in the pathogenesis. EH is a medical emergency and presents as dome-shaped vesicular clusters in areas of chronic dermatitis. HSV-1 as a primary infection or recurrence is seen more commonly than HSV-2. Diagnosis is frequently confirmed by light microscopy (Tzanck test), viral PCR and elevated inflammatory markers. Viral cultures and skin biopsy are less reliable. These patients are at a high-risk of impetigo and bacteremia necessitating topical/systemic antibiotics. Antivirals are the mainstay for therapy while topical glucocorticoids are controversial. Mortality is 1-9% and can be as high as 75% without prompt initiation of antivirals. Silver-based ointments and non-steroid emollients are recommended for topical use.

EH in the setting of immunosuppressants as a trigger has been infrequently reported making this case a unique presentation. 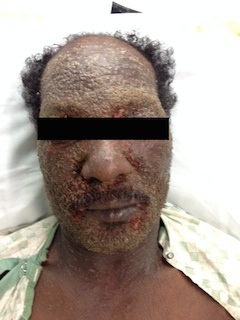