Emphysematous Gastritis Secondary to Adenocarcinoma of the Duodenum

A 60‐year‐old man with a medical history significant for chronic HCV infection with treatment failure complicated by cirrhosis (Child–Pugh class B) presented to our institution with a 3‐week history of nausea, nonbilious, nonbloody vomiting, and poor oral intake. His symptoms began the day after completing a contrasted CT study of the liver. On examination the patient appeared ill and dehydrated, but his vital signs were within limits of normal. Initial workup showed AKI with ATN (Cr 5.6 g/dL, BUN 94 g/dL, FENa 4.0%) and a profound hyponatremic, hypovolemic alkalosis with hypokalemia (Na 125 mEq/L, CO2 45 mEq/L, K 2.3 mEq/L). Aggressive fluid and electrolyte repletion were initiated with partial clinical improvement. On the fifth day of admission the patient developed hematemesis, guarding, fever (38.4°C) and leukocytosis (15,300/mL). An NG tube was placed providing considerable relief. A CT of the abdomen was pursued (Image 1). It revealed extensive pneumatosis of the stomach, esophagus, duodenum, and portal venous system. Medical management was provided with octreotide, pantoprazole, imipenem/cilastin, and metronidazole, which resulted in resolution of the fever, leukocytosis, nausea, and hematemesis. An EGD revealed an inflamed mucosal bulb (Image 2) obstructing the gastric outlet. Biopsies were obtained and revealed adenocarcinoma. The tumor was confined to the submucosa, and no extensions or metastases were detected. The patient underwent surgical removal of the mass and was discharged in good condition on the fourth postoperative day.

Emphysematous gastritis is an exceedingly rare condition, and therefore management must be individualized. Previous case reports have described isolation of Candida, E. coli, Streptococcus, and Pseudomonas. Our patient did not have any of the risk factors previously described in the literature. Furthermore, our patient's disease was not limited to the stomach but extended into the duodenum, esophagus, and portal venous system. It is suspected that his prolonged course of vomiting from gastric outlet obstruction secondary to adenocarcinoma of the duodenum resulted in breakdown of the stomach's protective barriers, allowing for traumatic mucosal injury and resultant entry of bacteria. Increased awareness of emphysematous gastritis will lead to earlier diagnosis and treatment that may improve the prognosis of this devastating condition.

Emphysematous gastritis is an extremely rare condition, with only a handful of cases reported since it was first described in 1889. The disease in characterized by intramural gas in the stomach secondary to infection or ischemia, and mortality approaches 60%. Predisposing factors include corrosive ingestion, alcohol abuse, and an immunocompromised state. 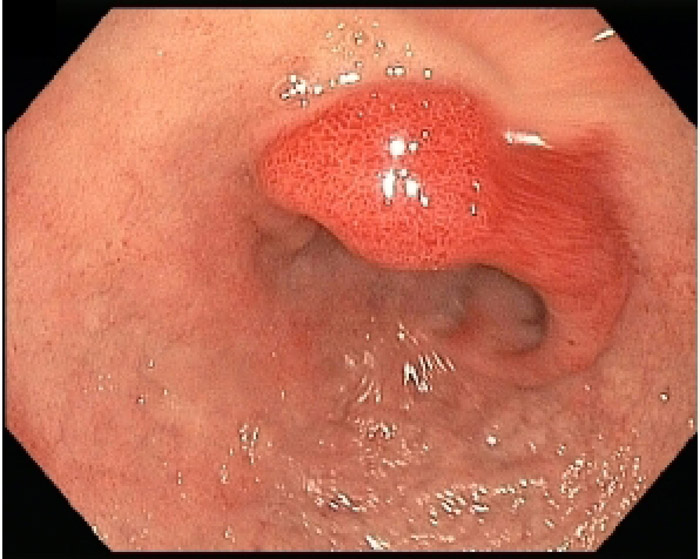 Emphysematous Gastritis Secondary to Adenocarcinoma of the Duodenum.