Case Presentation: 68-year-old female presented to the Emergency Department with dark liquid stool, nausea, and dry heaves for 4 days. She denied eating anything unusual, sick contacts, or recent tick exposure. Medical history was only significant for osteoporosis and mild compensated hypothyroidism. Review of systems revealed no headaches, rashes, dysuria, cough, or shortness of breath. Social history was notable for smoking. Patient denied any alcohol use. She retired from secretarial work and previously was a dog breeder.Initial vitals included temperature 99.1, heart rate 125, respiratory rate 24, and blood pressure 106/74, which suddenly dropped to 78/58. She rapidly became febrile at 102.9.
Physical exam revealed an ill-appearing woman. No bowel sounds were present. She had no lymphadenopathy, meningismus, murmurs, crackles or rhonchi, peritoneal signs, abdominal distension, hepato-splenomegaly, Murphy’s sign, costovertebral angle tenderness, or rashes. Of note, her dark stool was guaiac-positive.
Notable labs: WBC 28, PLT 3, Bands 11%, Lactate 12.4, Cr 1.6, HCO3 13, Anion Gap 22, Glucose 57
CT of the abdomen showed normal liver, gallbladder, and pancreas, but atrophy and scarring of the spleen. No hydronephrosis or free fluid in the pelvis was seen. Sigmoid diverticulosis without acute diverticulitis was appreciated.
Fluid resuscitation and empiric vancomycin and piperacillin-tazobactam were initiated. The patient was transferred to the intensive care unit and was started on norepinephrine for hemodynamic support. Platelets were transfused.
The patient was electively intubated for profound metabolic derangements. ABG prior to intubation showed pH 7.05, PCO2 24, P02 71, HCO3 6.8, Base Excess -22.0.
Fluconazole was added.
Subsequent blood smear revealed the following picture (see attached).
The blood smear was interpreted as mature basophilic inclusions with no evidence of parasites, raising concern for Ehrlichiosis. Doxycycline was added to her treatment.
The patient continued to decompensate, with worsening lactate despite vigorous fluids, persistent hypoglycemia, profound acidosis despite rescue bicarbonate infusion, worsening transaminitis and kidney failure. A second pressor was added and hydrocortisone was started in an attempt to abate septic shock. Despite all these measures, the patient succumbed 42 hours after her presentation.
One day after her expiration, blood cultures resulted positive for gram-negative bacilli, which were identified as E. coli and Capnocytophaga spp. sensitive to the antibiotics given.

Discussion: In this dramatic case, we were confronted with septic shock of unknown origin. We suspected a gastrointestinal source, but the diagnosis of Capnocytophaga infection eluded us. The blood smear was erroneously interpreted as Ehrlichiosis. This patient had several risk factors for septic shock from Capnocytophaga, including close contact to dogs as a dog breeder and some degree of splenic damage as seen on CT scan. Although the broad antibiotics covered this rare organism, it would be prudent for physicians to keep capnocytophaga infection on their differential as dog exposure is prevalent and the presentation can be lethal. 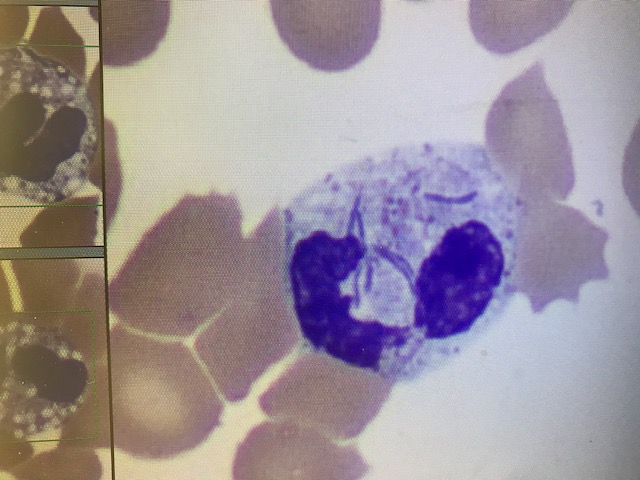