I Did Not See That Coming! an Unexpected Cause of Eye Pain

A 34 year old man presented with five days of severe right eye pain. Hours after popping a pimple on the supraorbital ridge of his right eye, he developed fevers, chills, headache, blurry vision, and diplopia.

Vitals on admission were T–96.7OC, BP–125/86, HR–69, RR–18, 98% on RA. Exam was notable on the right side for proptosis, pain with extraocular movements, periorbital erythema, swelling, restricted upward gaze, and conjunctival injection. Fundoscopic exam was normal with intact visual fields.

Although colorectal cancer is the third most common malignancy in men and women, metastases to the orbit are exceedingly rare with only eight cases described in the literature. Melanoma, breast cancer, and prostate cancer are the most common primary malignancies associated with orbital metastases. Of the eight reported cases, this case is unique in that the initial diagnosis was made after the patient presented with an ophthalmologic complaint.

Rectal cancer metastasizes via two known mechanisms, the portal venous route and the seeding of Batson’s venous plexus. One theory as to why orbital metastases are so rare may be the long distance through multiple vascular beds that tumor emboli must traverse to reach the eye. Orbital metastases from colorectal cancer have a poor prognosis as all reported patients died within one year of orbital involvement.

Metastatic rectal carcinoma most commonly occurs in older individuals or in younger patients with familial genetic abnormalities. The patient’s young age may be a reason why further workup for rectal bleeding was not initially pursued. Hospitalists commonly encounter rectal bleeding, and it is imperative that providers are able to differentiate life-threatening and malignant etiologies from benign conditions.

This case illustrates the importance of obtaining a detailed history and physical while highlighting the perils of anchoring bias (i.e. attributing rectal bleeding to hemorrhoids in a young patient) that led to a delayed diagnosis of rectal cancer. In addition, this case is particularly noteworthy given the patient’s young age, negative family history, normal genetic markers, and unusual clinical symptoms that led to the diagnosis of metastatic cancer. 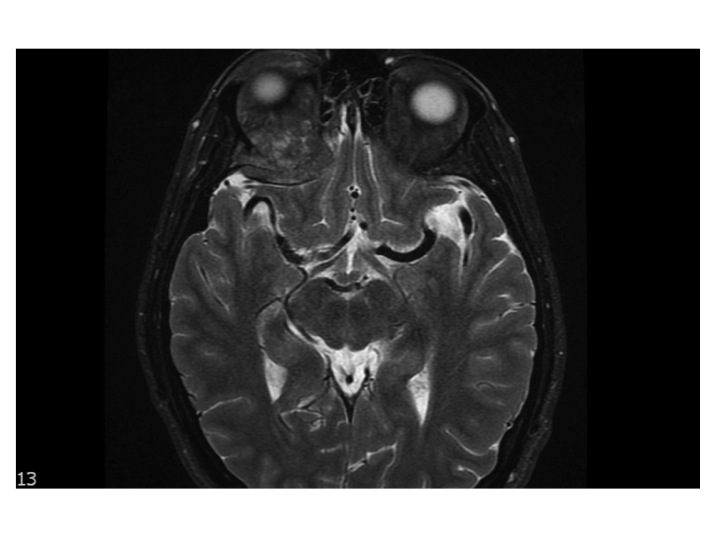 I Did Not See That Coming! an Unexpected Cause of Eye Pain.