This 65 year old female presented to the hospital with headache, nausea and vomiting, lethargy and malaise. She has no past medical history. An urgent MRI was performed which showed a 2.2cmX1.6cmX1.6cm pituitary macro adenoma compressing the optic chiasm and a vague 4mm lesion in the right temporal lobe. She was transferred to our hospital for work up and treatment.

Lab work, including CBC and CMP, were normal. CT scan of chest, abdomen and pelvis showed a 2cm LLL non‐calcified nodule with an enlarged L hilar lymph node and RLQ mesenteric mass. PET scan showed enhancement of the LLL mass and mesenteric mass, as well as a right abdominal wall mass and mass adjacent to the sigmoid colon that was not present on CT. The remaining exam was negative. Biopsy of the abdominal wall mass was performed and was consistent with melanoma.

Treatment during the hospitalization included IV decadron which led to complete resolution of symptoms. Oncology was consulted and arranged for outpatient radiation of the brain lesion. She was scheduled for outpatient follow up for treatment of Melanoma of Unknown Primary (MUP).

MUP is diagnosed if melanoma is confirmed clinically, histologically and immunohistologically with no cutaneous tumor identified and if mucosal melanoma is excluded. MUP occurs in up to 10% of all melanoma cases. Comprehensive work up, biopsy and chemical staining are necessary as melanoma can mimic other neoplastic cells.

The origin of MUP may include: regression of a primary melanoma, previous excision of a misdiagnosed melanoma or malignant transformation of melanocytes in a non‐cutaneous site from precursor neural crest cells during embryonic development.

Extension occurs primarily through contiguous spread. Rarely, angiotropism, dissemination from teratoma germ cells, and possibly through a collision of tumor involving 2 separate cell lines: one of which is melanocytes.

The most common site of spread is the lymph nodes, but can be found in leptomeninges, visceral linings, liver, renal, brain and rarely other sites. Melanoma has been diagnosed in all ages, races and has a fairly equal distribution between sexes.

Staging of MUP has been assigned by the AJCC (American Joint Committee on Cancer) and identifies MUP as: Stage IIIa (in‐transit metastases), Stage IIIb (lymph node metastases) and Stage IV (visceral metastases). Overall survival for MUP stages IIIb and IV shows similar or a slightly better survival rate as compared to MKP (melanoma of known primary). Survival for Stage IIIa is slightly worse. These statistics have not shown a clinically significant difference from MKP.


FOLLOW UP:
The patient received pituitary radiation therapy causing regression of the tumor. Unfortunately, she developed pan‐hypopituitarism requiring hospitalization and treatment. Pathology was consistent with BRAF positivity. Patient elected to enroll in a trial at Vanderbilt University, using ibilubimab +/‐ BRAF medication. She is currently receiving treatment and is doing well.

Melanoma does not always present cutaneously. Therefore, melanoma should be considered in the differential diagnosis in patients with a malignancy that does not have an obvious primary site 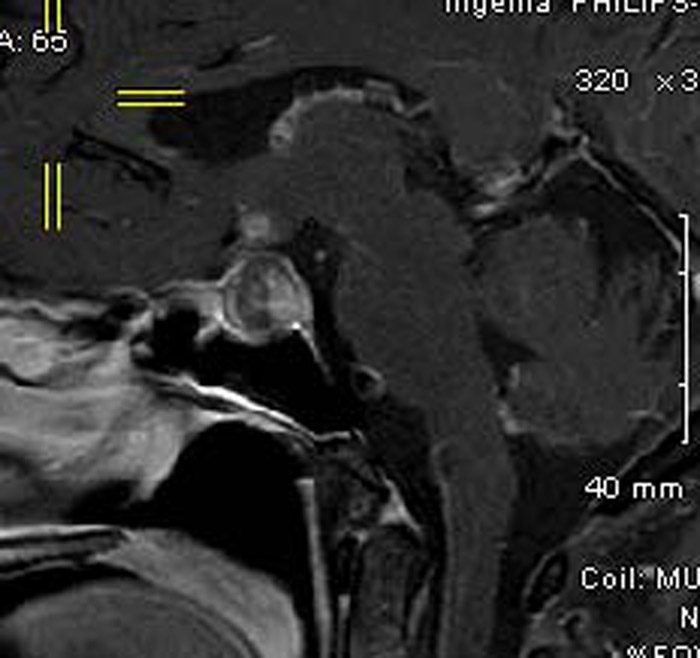