MYOCARDIAL BRIDGING: A “FORGOTTEN” CAUSE OF NSTEMI

Case Presentation: This is a 58-year-old woman who presented with substernal chest pressure for a few days prior to admission. The chest pain worsened with exertion and was associated with dyspnea. She denied any risk factors for coronary artery disease. Her blood pressure was 186/112, HR 61, RR 18. Exam revealed a regular heart rate with occasional early beats, but no murmurs, rubs or gallops. Her initial ECG showed normal sinus rhythm and frequent premature ventricular complexes. Her troponin-I was initially negative, but later increased, peaking at 18.4 ng/mL. Repeat ECG showed new T wave inversions in anterior leads. Non-ST elevation myocardial infarction (NSTEMI) was diagnosed and the patient was taken for cardiac catheterization, which showed severe myocardial bridging in the mid-LAD (left anterior descending artery) but no evidence of occlusive coronary disease. Myocardial bridging of the LAD was therefore implicated as the most likely cause of the patient’s NSTEMI.
Aspirin, clopidogrel and atorvastatin were initiated for NSTEMI medical therapy. Metoprolol tartrate was initiated for treatment of the myocardial bridging and irbesartan was initiated for blood pressure control.

By hospital day 2, the patient’s symptoms had resolved. An echocardiogram showed a left ventricular ejection fraction of 65% and mild concentric hypertrophy but no wall motion abnormalities. The patient denied any recurrence of symptoms when seen for follow-up 1 week and 1 month after hospital discharge.

Discussion: Myocardial bridging is a common congenital anomaly in which a segment of a coronary artery takes an intramuscular course under a “bridge” of overlying myocardium. This causes vessel compression in systole leading to hemodynamic changes associated with angina, acute coronary syndrome, left ventricular dysfunction, arrhythmias, and even sudden cardiac death. The clinical importance can depend on depth, length of the bridging segment, and vessel that is involved.
Using techniques to measure fractional flow reserve will help to differentiate a benign finding from a potential cause of sudden death. Optimal treatment of symptomatic myocardial bridging is controversial. First-line therapy involves medical treatment with beta-blockers or calcium-channel blockers, while nitrates should be avoided due to accentuation of vessel compression from reflex sympathetic activation. For refractory symptoms, interventions such as surgical myotomy, coronary artery bypass graft, and stenting have been attempted. Further studies are needed to identify the best treatment strategy for patients with myocardial bridging.

Conclusions: Myocardial bridging is a well known but under-recognized phenomenon that can lead to episodes of major adverse cardiac events such as NSTEMI. In a patient with relatively few risk factors for ischemia from atherosclerotic disease, myocardial bridging should be a part of the differential diagnosis for patients with acute coronary syndrome. Initial management should include beta-blockers while avoiding nitrates. Functional tests of fractional flow reserve are needed to determine clinical significance. Increased recognition of myocardial bridging will lead to a standardized approach to treatment. 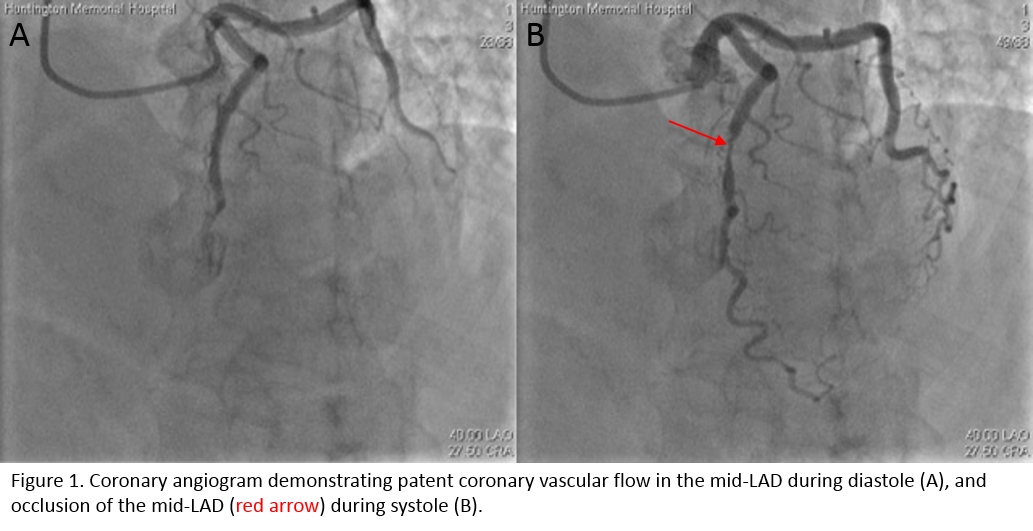 MYOCARDIAL BRIDGING: A “FORGOTTEN” CAUSE OF NSTEMI.