RECURRENT SYNCOPE IN A YOUNG PATIENT: FROM A SIMPLE OUTPATIENT BIOPSY TO BRUGADA SYNDROME AND A DEFIBRILLATOR

The patient reported he had had multiple syncopal and pre-syncopal episodes since 9 months of age. Many of these episodes were preceded by vagal, prodromal symptoms with stereotypical precipitants: the sight of blood, skin biopsy, or after bowel movement. However, there was one episode that occurred while swimming. Episodes lasted a few seconds, usually while standing, no seizure-like activity, often preceded by lightheadedness, and followed by nausea, emesis, or bowel movement.

Family history was notable for an uncle with seizures, and paternal grandfather and great grandfather who had passed from suspected myocardial infarction at age 70-80 years without known history of coronary artery disease, perhaps representing sudden cardiac deaths.

The patient had been able to run for 2-3 miles in recent months without symptoms. While the patient had not sought medical attention for most of these episodes, he had previously undergone tilt table testing and echocardiography that were unremarkable, and he had been told these episodes were vasovagal.

Discussion: Based on diagnostic EKG findings, personal history of recurrent syncope, and concerning family history, patient was diagnosed with Brugada syndrome (BrS). Pathology from his muscle biopsy is pending but will be important as there is overlap between BrS and myotonic dystrophy through a common genetic and pathophysiological mechanism. Cardiac MRI ruled out arrhythmogenic right ventricular cardiomyopathy, a disorder that can be otherwise phenotypically identical to BrS. Genetic screening and a subcutaneous implantable cardioverter-defibrillator (ICD) were recommended.

Prevalence of BrS ranges from 1 in 2000 to 5000, and may be responsible for 4-12% of all sudden deaths. It is much more prevalent in men. Mean age of presentation is 41 ± 15 years. Patients can present with syncope, seizures, and nocturnal agonal breathing due to ventricular tachycardia or ventricular fibrillation. Lethal arrhythmias usually occur during resting or sleeping, suggesting an association with bradycardia or vagal events.

Diagnosis of BrS can be made without further testing when a type 1 EKG pattern is present. Type 1 Brugada pattern consists of ≥2 mm ST elevation in V1 and/or V2 positioned in the 2nd-4th intercostal space, a concave or straight ST segment that crosses the isoelectric line, followed by a negative and symmetric T wave. Placement of right precordial leads in more cranial positions may increase sensitivity due to the variable anatomical correlation between right ventricular outflow tract and V1-V2 in the standard position. 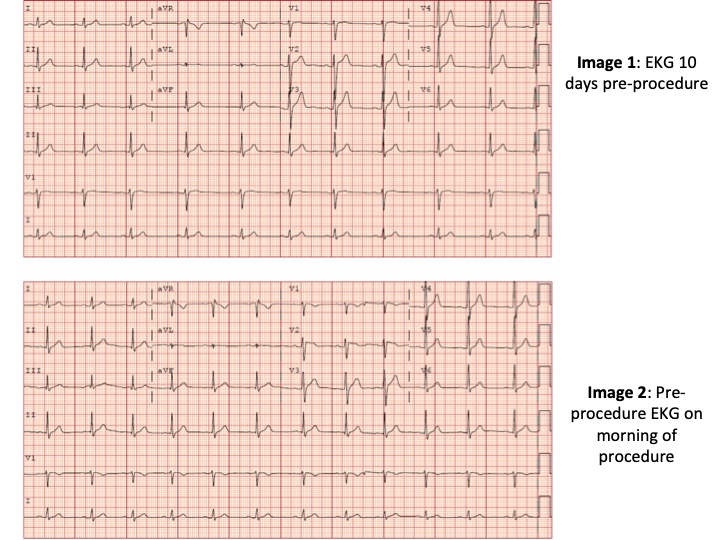 RECURRENT SYNCOPE IN A YOUNG PATIENT: FROM A SIMPLE OUTPATIENT BIOPSY TO BRUGADA SYNDROME AND A DEFIBRILLATOR.