Sepsis is the leading cause of inpatient death.  Recent literature suggests standardizing care for early sepsis prior to onset of shock may lead to improved survival.  Early sepsis treatment protocols are common in emergency departments, where they are often characterized by collaborative relationships between nurses and physicians with roll clarity for each.  Early treatment protocols are less developed in the hospital, where interventions are limited by the speed of sending and returning pages before a physician recognizes sepsis and writes appropriate orders.

For 5 days in April of 2014, a team of inpatient physicians and nurses worked together in a Rapid Process Improvement Workshop to define a new process focused on early identification and treatment of patients who develop sepsis while hospitalized. They named their process “Sepsis Power Hour” to highlight our target of starting all 4 elements within 1 hour of sepsis recognition.  The team approached this task by sorting the individual bundle elements into RN and MD scope of care, then sequencing RN and MD work appropriately (Figure 1).

For example, the nurse is empowered to recognize sepsis.  He or she then initiates a lactate check, blood culture draw, and 500cc normal saline bolus immediately.  A page is sent to the doctor when the lactate result is available.  The doctor’s roll is to confirm sepsis before ordering the full 2 liter fluid bolus and antibiotics. Safety checks are built into the process, such as a hard stop in our computerized order entry system that limits the process from being initiated more than once in a 24 hour period.

We completed a retrospective chart review of all patients who received a Sepsis Power Hour from June through September 2014. Patients were identified by the presence of a Sepsis Power Hour order in the electronic medical record. All patients with this order were included according to an intention to treat analysis. Bundle completion rates were compared to those of usual care patients: a random sample of 25 patients who were recognized to develop sepsis during hospitalization in the first quarter of 2014.

Sepsis Power Hour was ordered 57 times. Among Power Hour patients, 80% started a fluid bolus, 81% had a lactate resulted, and 56% received antibiotics prior to 1 hour after recognition of sepsis, compared to 36%, 48%, and 12% respectively in the usual care group (Figure 2).  All 4 elements were initiated within 1 hour for 21% of power hour patients.  We are not aware of adverse events among patients who received Sepsis Power Hour. 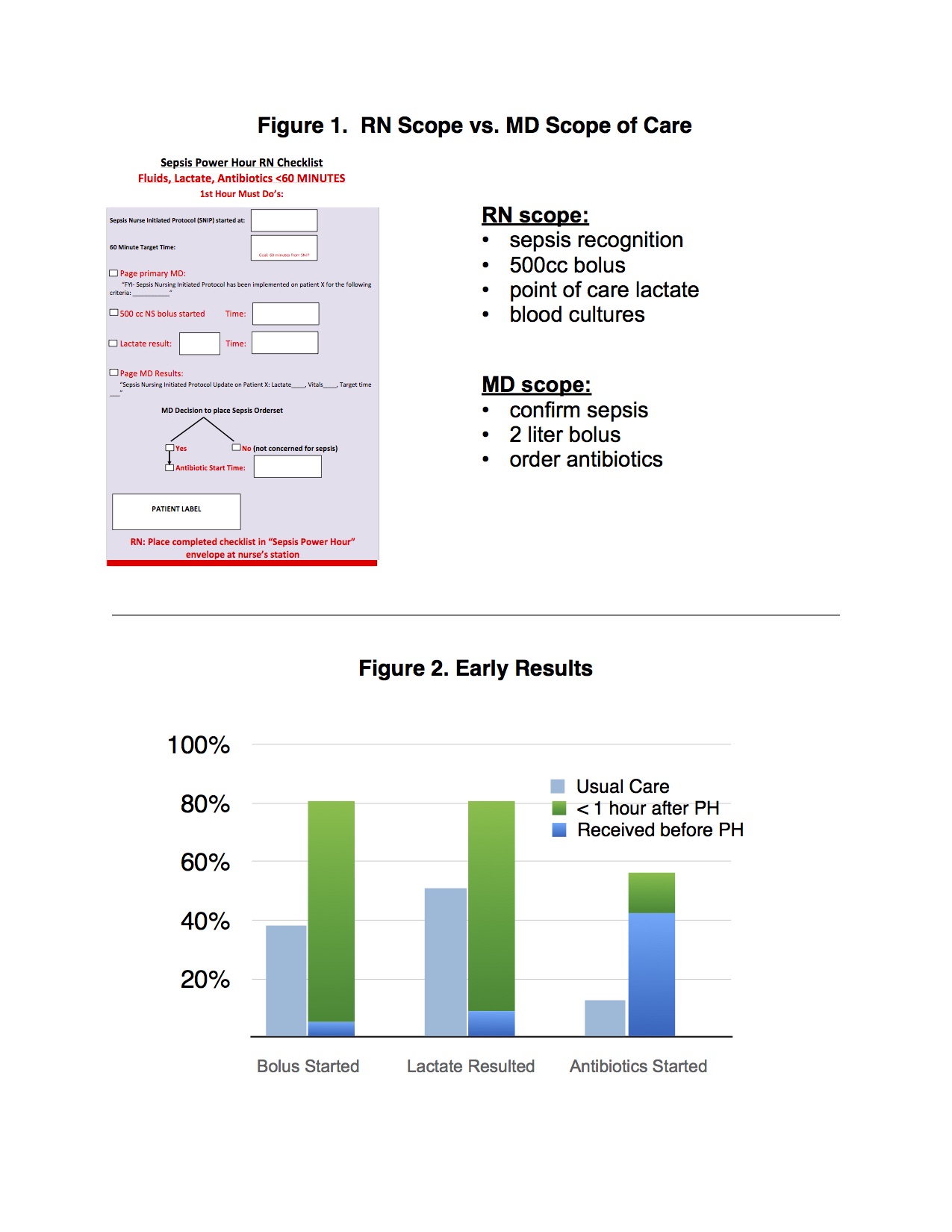