A 57 year old female with a past medical history of Lyme  disease was admitted to the hematology service with DIC. Acute promyelocytic leukemia was diagnosed and a PICC line was placed for access. Induction chemotherapy with Idarubicin, arsenic trioxide and all trans-retinoic acid was initiated. Neutropenia ensued and prophylactic treatment with Posaconazole, Acylovir and Augmentin started. After completing induction therapy, maintenance chemotherapy with Arsenic trioxide and Retinoic acid was initiated.

On hospital day 12 she became tachycardic, hypotensive and febrile to 40 degrees. The patient tested positive for H1N1. Antibiotic coverage was switched to Cefepime and Vancomycin. AST and ALT increased to 405, and 262 respectively. Initially the transaminitis was attributed to hypotension, but an ultrasound of the liver was ordered to rule out other pathology. Imaging demonstrated multiple lesions. Biopsy was obtained. Microscopy was suspicious for Mucormycosis. Cultures remained negative but PCR ultimately identified the organism as Candida Utilis. Despite antifungal therapy with Amphotericin B, fistulas developed and surgical resection was performed. Antifungal therapy was continued and repeat CT scan demonstrated resolving lesions. The patient elected to stop antifungal treatment after 6 months of therapy. She remains in remission and is doing well.

According to the CDC, candidemia is the fourth most common blood stream infection and is strongly associated with immunocompromised hosts. Solid organ infections are rare and normally occur in immunosuppressed transplant patients.

The incidence of Non Albicans Candida infections(NAC) is increasing significantly. Many factors, such as immunosuppressive therapeutic regimens, long-term catheterization, broad-spectrum antibiotic use, and longer survival of immunologically compromised individuals, likely contribute to this increase. C. Glabrata is the most common NAC species and is innately resistant to azole therapy. Fluconazole resistant species of Candida are more common in patients exposed to at least 7 days of antifungal prophylaxis. Candida Utilis infection is extremely rare. Review of the literature revealed 3 cases reports in neonatal patients. All reported cases were associated with central venous catheters. In this case, the catheter was not cultured, but we believe this is the most likely source.

In Septic patients, all lines should be discontinued and sent for cultures. Fungal cultures should be considered in immunocomprimised patients.

Hepatic ischemia can occur in the setting of septic shock and elevated Transaminases which quickly normalize are characteristic of “shock liver”. However the differential diagnosis of transaminitis is broad and solid organ infections should be considered in immunocomprimised hosts.

In contrast to C. albicans, antifungal susceptibility in NAC varies significantly. Many NAC species are inherently resistant to azoles.

Most of the NAC species are difficult to culture,  physicians should consider sending DNA PCR for definitive diagnosis. 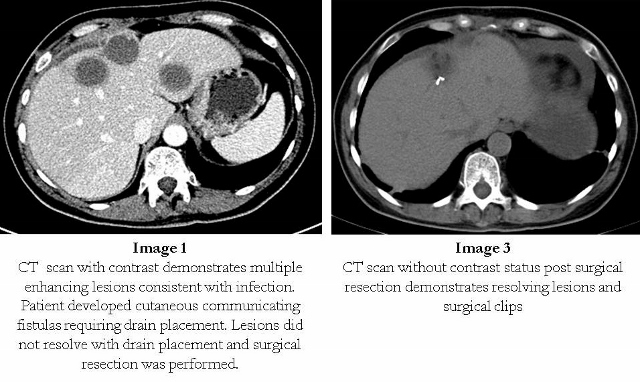