‘STUCK IN A BAD PLACE’: A RARE CAUSE OF SMALL BOWEL OBSTRUCTION

Case Presentation: A 78-year-old male with a past medical history of atrial fibrillation presented with abdominal pain, nausea, and vomiting. His surgical history includes hernia repair, appendectomy, and cholecystectomy. He endorsed symptoms of anorexia and constipation, with review of systems otherwise unremarkable. His abdomen was mildly distended and tender to palpation without rebound or guarding. CBC, CMP, and lipid panel were largely normal. HIV and hepatitis panels were negative. CT of the abdomen showed a mild partial small bowel obstruction (SBO), likely secondary to adhesions. The patient was conservatively managed, and he was discharged 3 days later after successful resolution of the SBO. However, he returned 2 days later with a similar, more severe presentation. Repeat CT showed moderate partial SBO, along with a 1.6 cm nodular density on the gastric antrum. He progressively worsened with conservative management and underwent an exploratory laparotomy 5 days later. Intraoperatively, a completely occlusive mass was identified in the ileum along with 2 smaller masses in the jejunum, causing partial obstruction.Surgical pathology revealed high-grade lymphoma. Tumor cells were positive for CD20, PAX-5, Bcl-6, c-MYC and EBER, most consistent with Burkitt lymphoma. Imaging revealed adenopathy in the chest, active lymphoma on both sides of the diaphragm, and multifocal gastric involvement. The patient was started on DAEPOCH-R chemotherapy. He is currently undergoing his fifth cycle with PET scans showing a favorable response.

Discussion: Burkitt lymphoma (BL) is a rapidly growing type of non-Hodgkin’s lymphoma (NHL) characterized by a translocation of the Myc gene on chromosome 8. BL has 3 recognized categories: endemic, sporadic, and immunodeficiency-associated. The sporadic form affects about 30% of pediatric lymphomas but comprises <1% of adult NHL. Sporadic BL typically presents as an abdominal mass with rapid and massive involvement of local organs, as seen in our patient. Patients receive intensive, specialized chemotherapy regimens along with rituximab and intrathecal prophylaxis.
SBO’s account for up to 9% of ED visits yearly, many of which get admitted under a primary hospitalist. Of these, 65-74% are due to adhesions, and about 5% are due to malignancies. This case illustrates the importance of exploring the differential for a patient presenting with SBO, especially in recurrent cases. Even on his second admission, our patient was conservatively managed for 5 days before undergoing further evaluation. This case quickly demonstrated the importance and necessity of early aggressive treatment.

Conclusions: SBO is a common admission to a hospitalist. Despite being notably rare in adults, our case emphasizes the need to consider Burkitt lymphoma in the differential for recurrent mechanical SBO, due to the disease’s aggressive nature. However, prognosis is favorable with early detection and treatment. 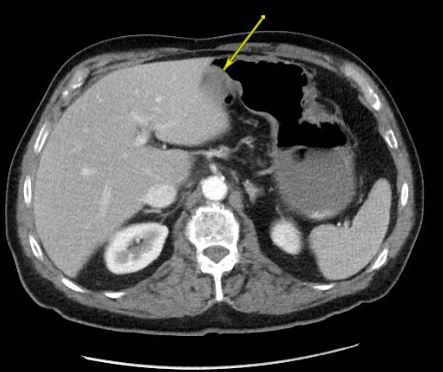 ‘STUCK IN A BAD PLACE’: A RARE CAUSE OF SMALL BOWEL OBSTRUCTION.