Discussion: Lyme disease is the most common tick-borne illness in the United States. While the number of reported cases continues to rise, the true incidence of Lyme disease is difficult to determine due to passive reporting of cases, frequent misdiagnosis, and false positive serologic test results. Clinical manifestations of Lyme disease vary widely and are classified into the early localized, early disseminated and late stages. Late Lyme disease, which occurs weeks to months after the initial infection, includes arthritis, polyneuropathy and encephalitis. Myositis is a very rare manifestation of late borrelial infection. To our knowledge, Lyme myositis has not been reported in the pediatric literature. A literature search revealed six case reports of Lyme myositis occurring in the United States and 28 total reported cases. The most recent case report describes a 43-year-old man who presented similarly to our patient.  In both cases, MRI showed localized myositis associated with a contiguous monoarthritis; Western blot confirmed Lyme disease with multiple positive IgG bands. In addition, Lyme PCR of synovial fluid from involved knee and involved musculature was positive in both cases. Our case is distinguished from the literature given that it is first known reported pediatric case of Lyme myositis. 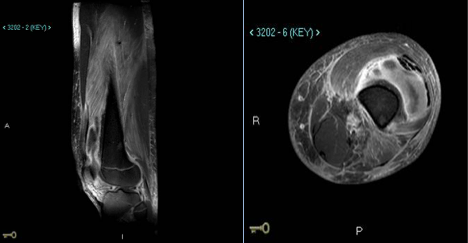