Case Presentation: Wernicke’s encephalopathy (WE) has been considered a disease of alcoholics, but it is also found in other scenarios in which severe nutritional deficiencies can result, such as in cancer patients with cachexia, and more recently described, in patients who have undergone bariatric surgery. It is an acute neuropsychiatric syndrome resulting from thiamine deficiency often associated with repeated vomiting. The classic triad frequently reported in these patients consists of optic neuropathy, ataxia and confusion.
A 30-year-old morbidly obese woman traveled to Mexico City and underwent sleeve gastrectomy. Patient returned home to the U.S. after a one-week hospitalization without any follow-up arrangements. One month later, patient presented to an ER in the U.S. with symptoms that were attributed to food poisoning, including vomiting, diarrhea, and subjective fevers. While the diarrhea and subjective fevers resolved promptly after hydration, patient continued to have worsening daily vomiting with severe difficulty tolerating regular diet following discharge from the ER. Patient again presented to another hospital two months after her sleeve gastrectomy with symptomatic weakness and restlessness in setting of unremitting vomiting. Extensive abdominal workup was done during this hospitalization: laboratory results demonstrated mildly elevated lipase and amylase as well as metabolic derangements; imaging studies, including CT and ultrasound, however, were non-revealing; endoscopy studies suggested only mild reflux esophagitis and gastritis. Given patient’s unexplained symptoms of uncontrolled projectile vomiting, worsening diplopia, and unsteady gait, patient was transferred to a tertiary medical center per family requests. On the second day of this admission, patient became acutely confused with visual and auditory hallucinations. Neurological examination was consistent with somnolence, horizontal nystagmus, and diplopia. While CT of the brain was normal, MRI revealed findings suggestive of Wernicke’s encephalopathy. Patient was immediately started on IV thiamine treatment and experienced gradual symptom relief before serum thiamine levels became available.

Discussion: Severe nutritional deficiencies after bariatric procedures such as sleeve gastrectomy are uncommon but can result in life-threatening conditions like Wernicke’s encephalopathy, although such complications are easily preventable if these deficiencies are identified early. Brain MRI in acutely affected Wernicke’s encephalopathy patients routinely demonstrates hyperintense signals on T2/FLAIR images and have proven to be a specific as well as sensitive tool for diagnosis.

Conclusions: The implementation of post-operative supervision and prophylactic thiamine supplementation in patients who develop repeated vomiting episodes are of particular importance. 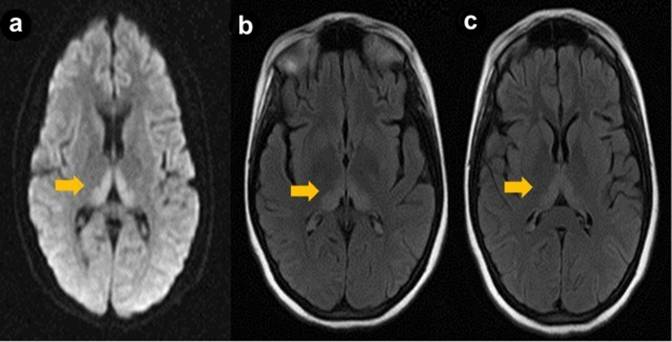