Case Presentation: A 37 y/o woman with past medical history of Multiple Sclerosis, diagnosed in 2011 was seen in clinic for evaluation of a new rash. Patient reported 1 week history of a reddish-purplish, non tender rash which had a circular, lacy pattern. She noted that the rash was predominantly in her lower extremities. She denies any similar episodes in the past. She denied fevers, malaise or weight loss. Her obstetrical history is significant for 5 prior 1st trimester spontaneous miscarriages. Her medications included Amitriptaline, Cyclobenzaprine, Pregabalin, Propranalol and Amantadine. The patient reported that Amantadine was the most recent medication that had been started 1 month prior to presentation. On physical examination, the patient exhibited a prominent, erythematous and purplish rash in a net like pattern in the bilateral lower extremities. Labs were notable for normal Antinuclear antibodies (ANA), negative lupus anticoagulant and cardiolipin antibodies. The patient underwent a biopsy of the rash which confirmed a diagnosis of Livedo Reticularis. Due to correlation of onset of the rash and initiation of Amantadine, there was a clinical suspicion of drug induced Livedo Reticualaris. Amantadine was discontinued with subsequent improvement of the skin findings. The patient was followed monthly for 6 months without recurrence of the rash.

Discussion: Livedo Reticularis is a skin finding that presents with a purplish discoloration of the skin in a reticulated vascular pattern, or commonly referred to as a “lace-like distribution”. The condition is caused by a congestion of deoxygenated blood within the venous plexus this usually occurs by impaired circulation through the arterioles at the junction of the dermis and subcutaneous tissues. This can be due to vasospasm, hyperviscosity, inflammation, hypercoagulability, and/or thromboembolism, as well as increased resistance to venous outflow. Common conditions that can lead to Livedo Reticularis include; autoimmune conditions such as SLE,, antiphospholipid antibody syndrome, cholesterol embolism, TTP, cryoglobulinemia, drug-related, and vasculitis. In this patient, all of the following were considered especially antiphospholipid antibody syndrome, given her past history of spontaneous miscarriages. Negative laboratory workup for autoimmune conditions ruled out these diagnoses. Amantadine has been implicated in cases of Livedo Reticularis. Amantadine is a drug originally used as an anti-viral drug for treating Influenza type A infections by acting on the viral M2 channel proteins and has recently found use in multiple sclerosis patients for managing fatigue. Livedo Reticularis is a reversible side effect and generally resolves rapidly on discontinuation of the drug. On rare occasions, progression to ulceration is possible.

Conclusions: Livedo Reticularis has been associated with certain medications including Amantadine. In this patient, improvement following cessation of Amantadine confirms the diagnosis. However, it is important to rule out other causes of the condition especially autoimmune conditions and antiphospholipid antibody syndrome in a young female patient.

IMAGE 1: Livedo reticularis of the bilateral lower extremities seen in the classic “lace like” distribution

IMAGE 2: Livedo reticularis of the bilateral lower extremities seen in the classic “lace like” distribution 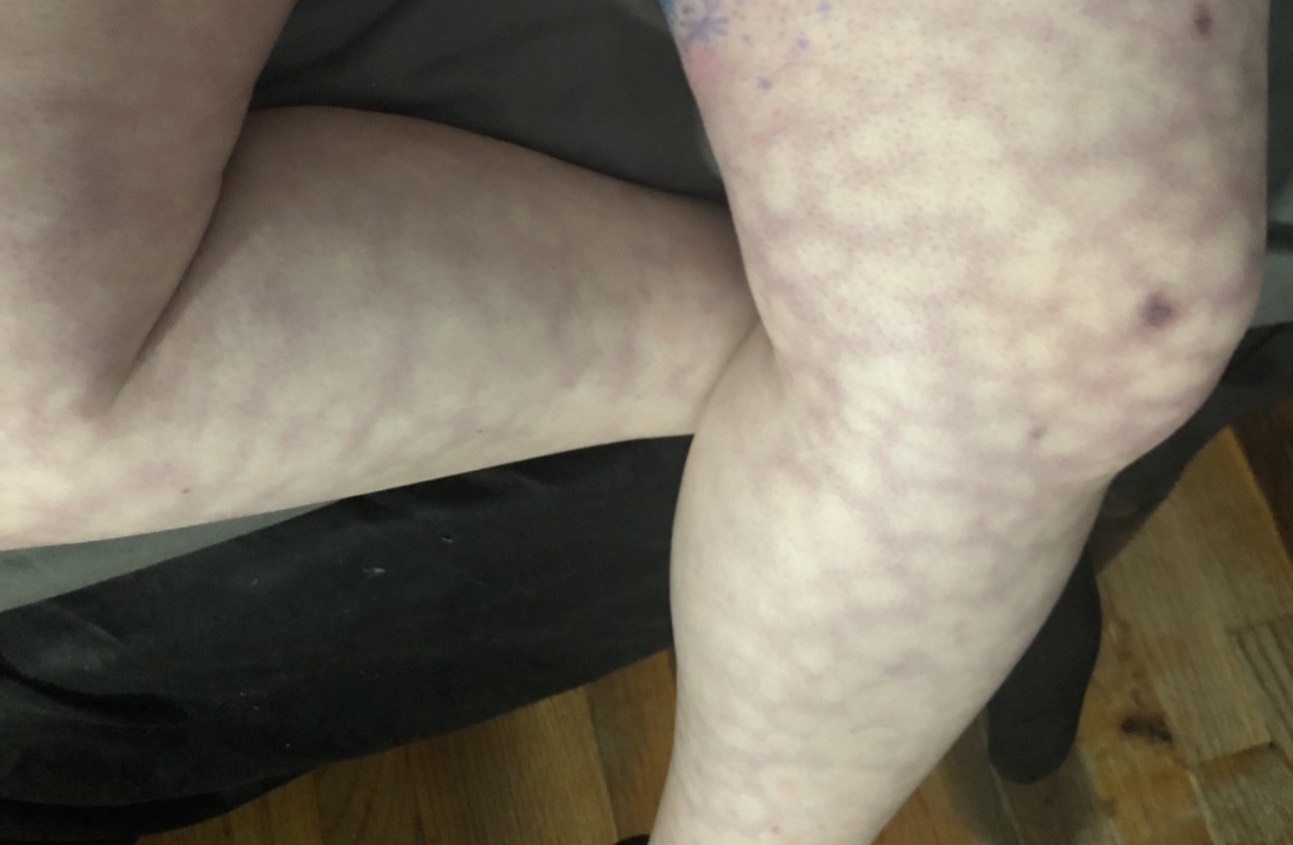 A CASE OF AMANTADINE INDUCED LIVEDO RETICULARIS IN A PATIENT WITH MULTIPLE SCLEROSIS.