A CASE OF SKIN NECROSIS CAUSED BY INTRAVENOUS XYLAZINE ABUSE

Case Presentation: A 32-year-old male with a past medical history of hepatitis C, intravenous opioid abuse, and chronic non-healing ulcers of bilateral lower extremities presented to the ED out of concern for possible infection in his legs. He reported open wounds on the anterior surfaces of bilateral lower legs for roughly nine months, starting with purulent drainage on his right ankle that spread proximally. He had been treated as an inpatient for ulcers of his arms and legs six months prior, but left against medical advice. He admitted to using various combinations of fentanyl and Xylazine (aka “Tranq”) intravenously, often in his legs. He explained that the combination prolongs the high, but when he missed a vein while injecting, the location would tend to ulcerate. He shares, reuses, and sometimes licks needles.In the ED, HR was 140 with systolic BP of 90, however these were attributed to recent IV drug use and resolved quickly without intervention. On exam, areas of exposed fascia, tendon, muscle, and bone were evident on the anterior surfaces of bilateral lower legs, without frank crepitus, fluctuance, or purulence (see images).CBC showed normal WBC count, slight macrocytic anemia, and thrombocytosis to 606. BMP showed mild hyponatremia to 134. UDS was positive for fentanyl. Wound culture grew moderate S. pyogenes, moderate S. aureus, and many Actinomyces species. Blood cultures were negative. X-rays of bilateral lower legs showed thinning of the tibial cortices. In consultation with Infectious Disease, antibiotics were switched to IV Ampicillin-Sulbactam. A motion-limited MRI of bilateral legs showed bone marrow edema in bilateral tibias, and osteomyelitis could not be excluded.​ In consultation with the Addiction Medicine service, he was treated for opioid withdrawal with fentanyl patch and hydromorphone PCA. Out of concern for sedative-hypnotic withdrawal from xylazine, he was monitored on a CIWA protocol and treated with clonidine and symptom-based dosing of benzodiazepines.

Discussion: This case illustrates the consequences of IV injection of Xylazine (“tranq”), a veterinary sedative-analgesic for large mammals. Its street availability has been reported in Puerto Rico and the Philadelphia area, and it is most often found as an adulterant in IV opioid preparations. It is a partial alpha-2 adrenergic agonist, and case reports of accidental injection and suicide attempts tell us about its effects in humans. Peripherally, alpha-2 agonism causes arterial constriction, but centrally, it acts as a sympathetic antagonist, decreasing heart rate and contractility. Acutely, this leads to hypotension and bradycardia, but also respiratory depression, acidemia and coma. Symptoms tend to persist for hours in humans, often remaining after the opioid’s effects have worn off. Xylazine withdrawal causes symptoms similar to that of benzodiazepines or other sedative-hypnotics. As corroborated in this case, Xylazine has also been reported to cause painful ulcers, perhaps mediated by its direct vasoconstricting effect on local blood vessels and resultant decreased skin perfusion.

Conclusions: The potential for increased use of Xylazine as an IV opioid adulterant portends a worrisome increase in the number of patients who may present for sequelae of IVDA, with the addition of serious skin and soft tissue infections, as well as more complex withdrawal physiology. IV drug users with ulcers similar to those here depicted should raise suspicion for concurrent Xylazine use. 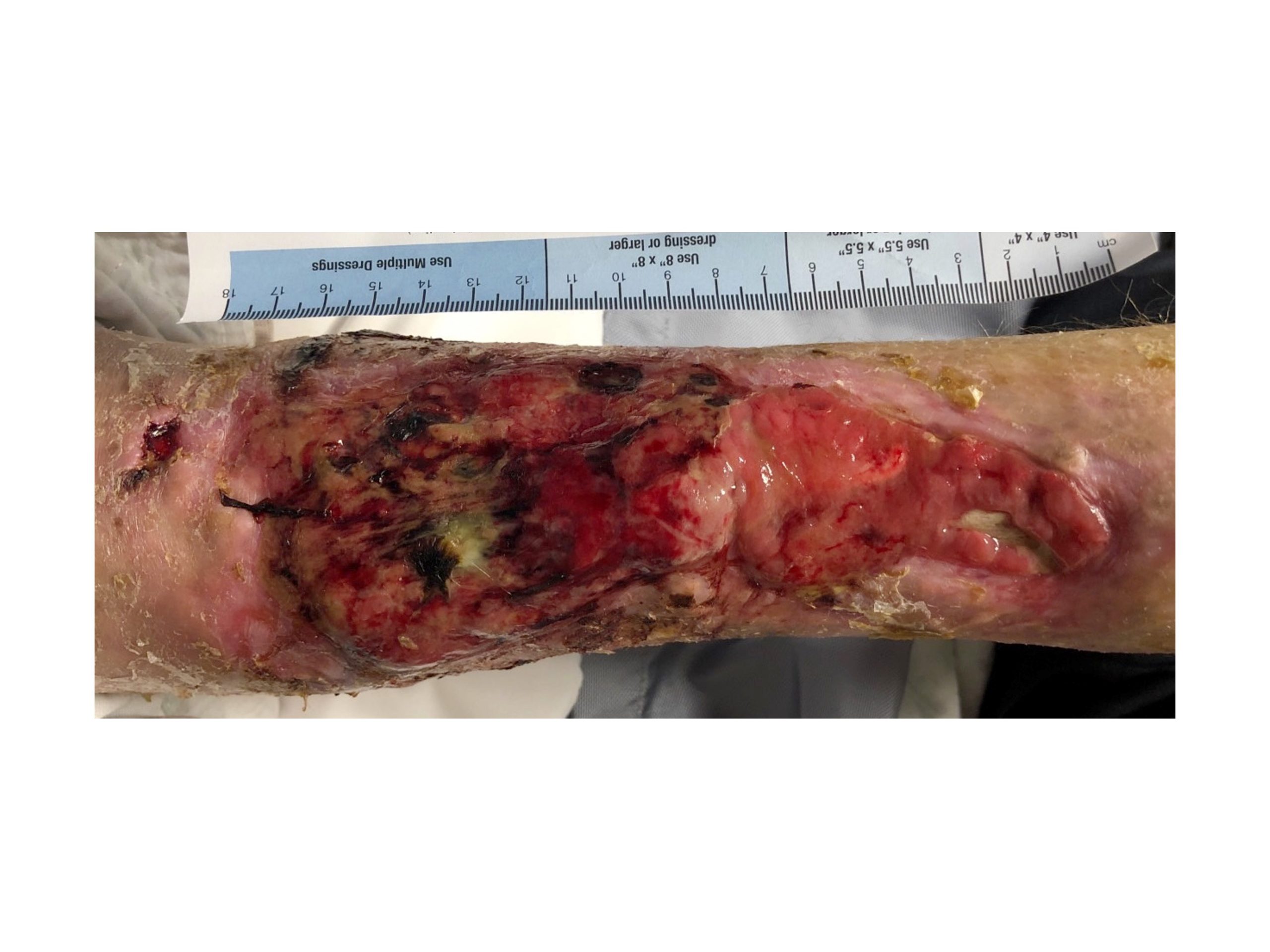 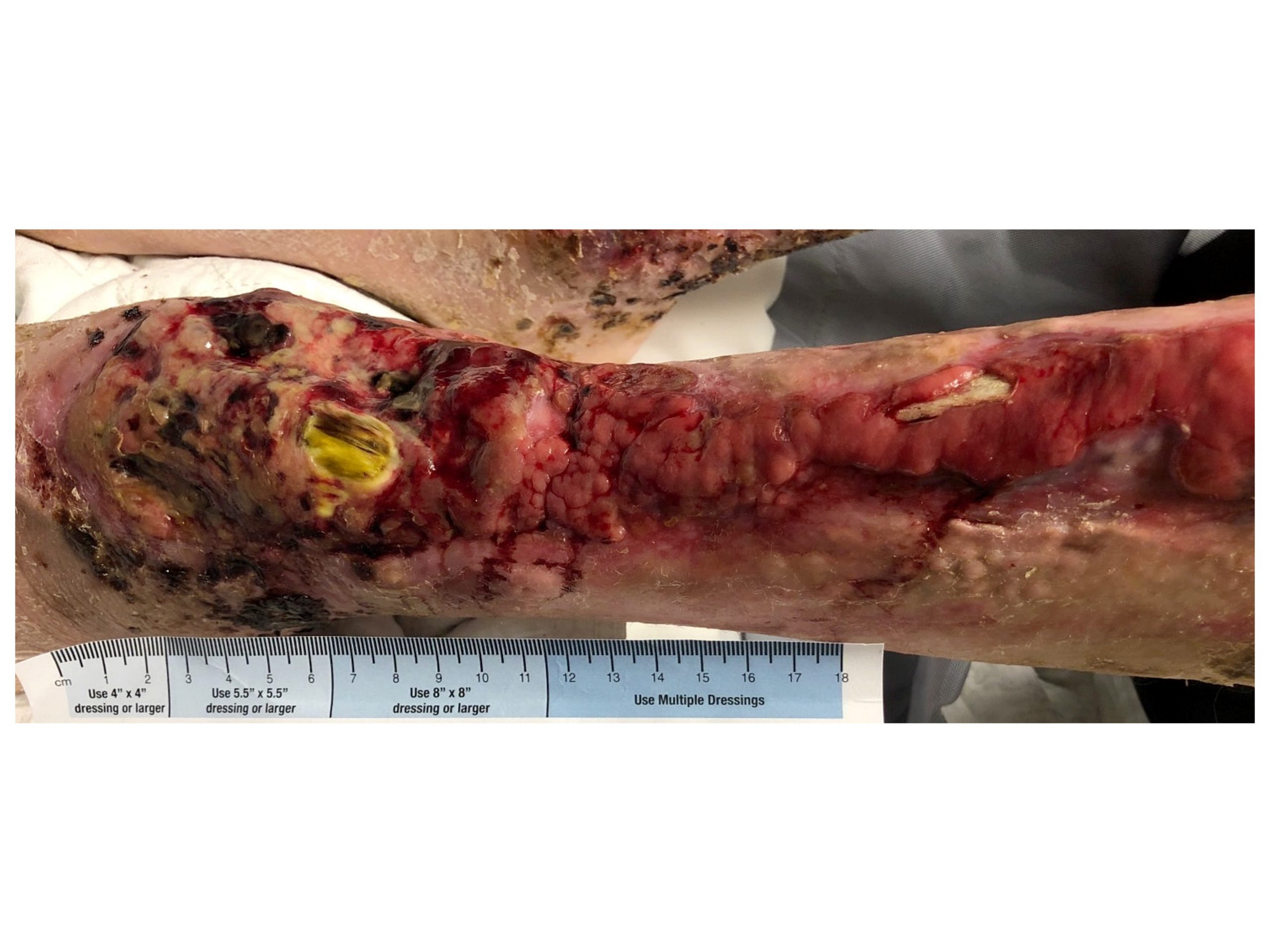 A CASE OF SKIN NECROSIS CAUSED BY INTRAVENOUS XYLAZINE ABUSE.