AN UNCOMMON CAUSE OF CHEST PAIN: MULTILOCULATED HEPATIC ABSCESS IN A PATIENT WITH STRONGYLOIDES STERCOLARIS INFECTION

Case Presentation: A 53-year-old male with a past medical history of hypertension who recently emigrated from El Salvador presented to an ambulatory clinic for evaluation of substernal chest pain that started eight days earlier. He described the chest pain as intermittent, non-radiating, and associated with palpitations, chills, shortness of breath, and diaphoresis. He denied fever, abdominal pain, nausea, or vomiting. On physical examination the abdomen was soft, non-tender and non-distended. The ECG showed junctional tachycardia and TWI in lead III and aVF. The patient was sent to the ER to rule out ACS. Laboratory tests were significant for WBC 12.63 K/uL, lactate 10 mmol/L, ALK 193 U/L, AST 88 U/L, ALT 94 U/L, T Bil 0.4 mg/dL, D-dimer 878 ng/mL, troponin elevated to 0.82 ng/mL, and A1c 8.6%. Antibodies for Entamoeba histolytica, HIV, and HTLV-1 were negative. CTA of the chest was negative for PE, but revealed an incidental heterogenous mass within the liver. An abdominal CT confirmed a 5.5 x 8.9 x 9.8 cm mass with multiple loculations in the right and caudate hepatic lobe that was suspected of being an abscess. The patient was admitted for the management of septic shock secondary to a hepatic abscess. Blood cultures grew K. pneumoniae. Ova and parasite exams showed Strongyloides stercoralis larvae. Interventional radiology recommended against the drainage of the abscess due to its complexity and location. He was started on ceftriaxone 2g IV daily with metronidazole 500 mg orally three times daily for four weeks as well as oral ivermectin. A repeat abdominal CT after four weeks of treatment demonstrated complete resolution of the hepatic abscess.

Discussion: A liver abscess is an uncommon but potentially life-threatening infection. Common predisposing causes include biliary disease, gastrointestinal malignancies, congenital anomaly of the biliary tree, portal vein seeding, and penetrating trauma. Approximately 18%–66% are cryptogenic, with no underlying cause identified. Clinical manifestations often include right upper quadrant pain, high fever, nausea, and vomiting. Management includes image-guided drainage and antibiotic therapy. It is recommended that antibiotic treatment be continued for at least four to six weeks.Liver abscesses are commonly caused by polymicrobial infections, with the most common organisms being E. coli, streptococcus, enterococcus, and anaerobes. Recent data show that K. pneumoniae is the most common pathogen in pyogenic liver abscesses, with higher susceptibility in diabetic patients. Chronic strongyloidiasis also increases the risk of severe K. pneumoniae infection. In immunocompromised patients, strongyloidiasis may spread to tissues outside the autoinfection cycle, such as the liver. This suggests that strongyloidiasis causes severe disease with enterobacteria via induction of mucosal rupture, leading to dissemination. However, this relationship should be further studied.

Conclusions: This case is an unusual presentation of a hepatic abscess, where the patient did not report abdominal symptoms. He presented with chest pain and tachyarrhythmia, which were found to be secondary to demand ischemia due to the septic process. There could be a relationship between new onset diabetes with strongyloidiasis and K. pneumoniae infections in the development of hepatic abscess. A liver abscess can have a mortality of 100% without treatment, which drops to between 2.5% and 14% when treated. For this reason, early diagnosis and treatment are essential for decreasing mortality.

IMAGE 1: CT of the abdomen and pelvis with IV contrast showing a 5.5 x 8.9 x 9.8 cm mass with multiple loculations in the right and caudate hepatic lobe compatible with an abscess. 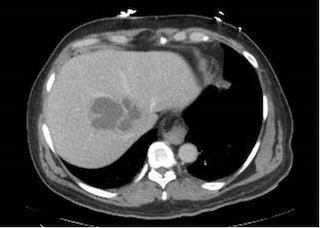 IMAGE 2: CT of the abdomen and pelvis with IV contrast after four weeks of antibiotic treatment showing resolution of the hepatic abscess. 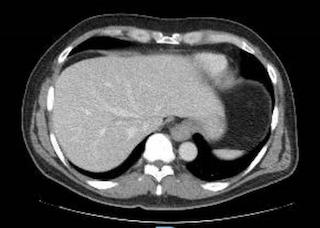 AN UNCOMMON CAUSE OF CHEST PAIN: MULTILOCULATED HEPATIC ABSCESS IN A PATIENT WITH STRONGYLOIDES STERCOLARIS INFECTION.