Background: Several studies have been conducted worldwide on gender discrimination in the medical field[1]. A Japan-based study showed that although the number of female physicians in the country doubled between 1980 and 2016, less than 10% held significant positions (e.g., professor)[2]. In Japan, discriminatory admission practices in several medical schools were publicized in 2018, revealing a gender bias. However, no detailed investigation into discrimination against women in the Japanese medical school admission system has been conducted. This study investigated whether women had been discriminated against in the medical school admission process and whether this situation has changed.

Methods: We conducted a cross-sectional study based on secondary data obtained from the Ministry of Education, Culture, Sports, Science, and Technology (MECSST). The subjects were four medical schools reported by the MECSST to engage in discriminatory practices from 2017 to 2020: Juntendo University (JU), Tokyo Medical University (TMU), Kitasato University (KU), and St. Marianna University School of Medicine (SMUSM). We analyzed the proportion of male and female applicants vis- à-vis all successful candidates admitted to the medical schools. We calculated odds ratios (ORs) and 95% confidence intervals (95% CIs), to assess the trends in the number of male and female applicants and accepted candidates. The 2017 and 2018 academic years were defined as the pre-disclosure period, while 2019 and 2020 were defined as the post-disclosure period. The significance level was set at 5%. All analyses were performed using Stata statistical software, version. 14.0 (Stata Corp. 2015, Stata 14 Base Reference Manual).

Conclusions: Our findings showed that three universities (JU, TMU, and SMUSM) discriminated against women before this practice was publicized (2017 and 2018). However, the situation improved after the disclosure (2019 and 2020). Our study has counteracted the potential bias that gender differences are inevitable in the selection process of entrance examinations in the medical field.

IMAGE 1: Figure 1. Number of male and female applicants vis-à-vis successful applicants for the past four years in the four analyzed universities (% indicates the acceptance rate). “M” indicates male acceptance rate and “F” female one. “Disclosure” means the period that the discriminatory practices were revealed by MECSST. 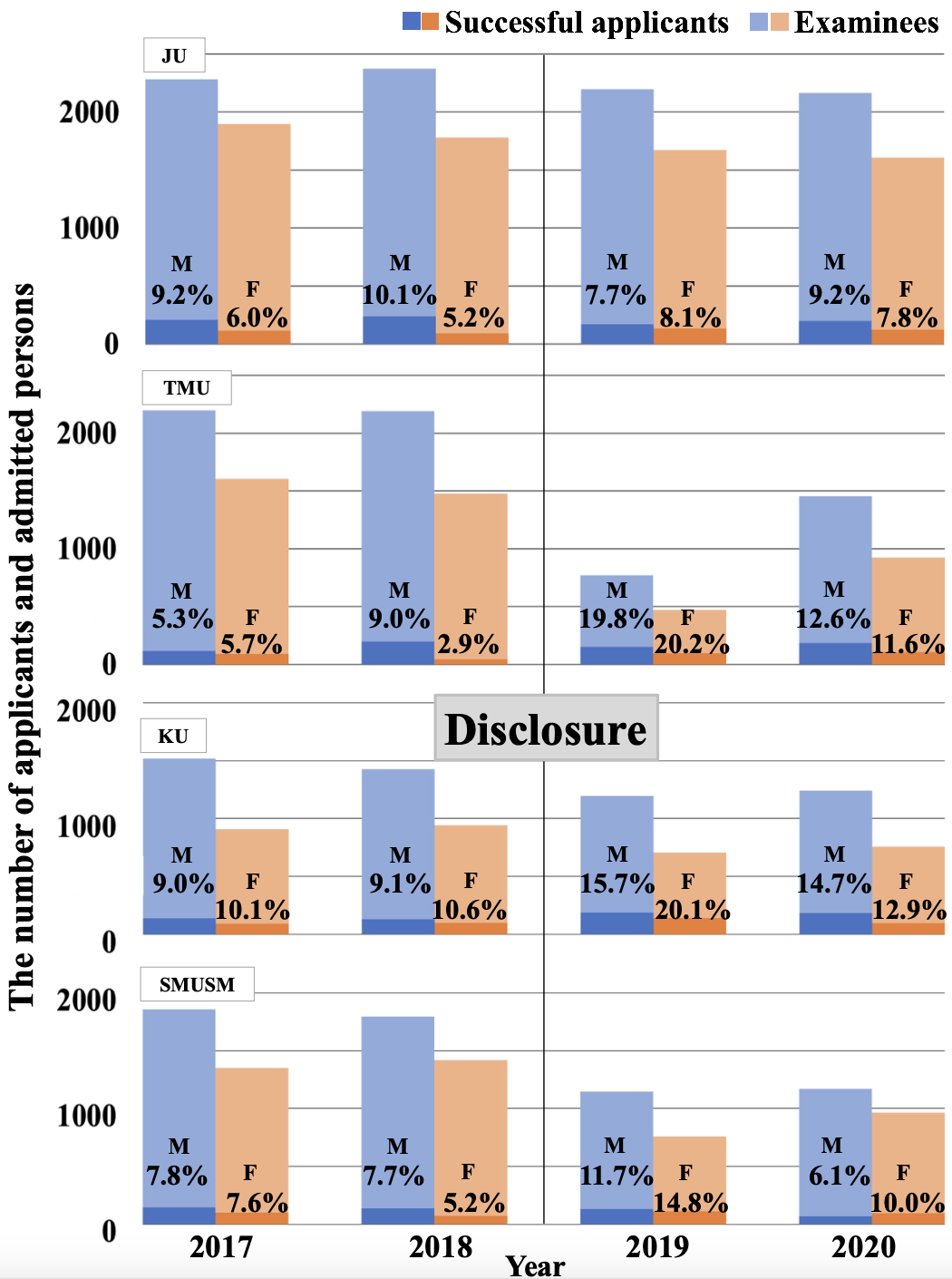