GLYCOGENIC HEPATOPATHY: AN UNDER RECOGNIZED COMPLICATION OF HYPERGLYCEMIA

Case Presentation: Mr. O is a 28 year old Navy cadet with no significant past medical history who presented to the Emergency Department with three days of malaise, nausea, polyuria, and polydipsia in the setting of recent steroids for a new rash. On presentation, Mr. O’s glucose returned at 624 mg/dL, pH was 7.28 and beta-hydroxybuterate was >20 mmol/L. He was admitted for diabetic ketoacidosis (DKA) and treated with intravenous fluids, insulin drip, and electrolyte repletion.Additional studies revealed an initial AST of 61 U/L and ALT of 266 U/L. Both up trended to AST 404 U/L and ALT 560 U/L by hospital day 3. The patient had no known liver pathology, rare alcohol use, was not on any hepatotoxic medications and had no right upper quadrant pain. Viral hepatitis serologies were negative for infection. Right upper quadrant ultrasound showed an 18.3 cm liver span and increased echogenicity consistent with enlarged fatty liver.Liver enzymes were noted to have a significant upward trend during his DKA treatment followed but a sudden drop with normalization of glucose. Given his obese habitus, some baseline element of non-alcoholic fatty liver disease (NAFLD) is likely, but would not explain the acute rise in LFTs indicative of acute hepatic injury.

Discussion: Glycogenic hepatopathy (GH) is an infrequently described and likely under recognized disorder characterized by reversible excessive accumulation of glycogen in hepatocytes, which causes transient elevation in liver enzymes and hepatomegaly(1). GH has most commonly been described in association with poorly controlled diabetes mellitus (DM) and/or DKA(2). The laboratory and histological findings of GH are reversible with an intensive insulin regimen and good glycemic control.GH is thought to be caused by wide fluctuations in blood glucose levels and supraphysiologic levels of insulin used for treatment, but the pathophysiology remains poorly understood. In normal hepatic function, high levels of blood glucose cause an influx of glucose into hepatocytes, where it is trapped. Subsequent exposure of the liver to high levels of insulin stimulates conversion of glucose to glycogen. A key enzyme in this process is glycogen synthase. High levels of glucose and insulin indirectly stimulate the activity of glycogen synthase(1). It is unknown why this process is dysregulated in GH, allowing for excessive and maladaptive accumulation of glycogen.GH is underrecognized in part due to its clinical similarity to NAFLD, which is much more common than GH and often seen in association with DM. Clinically and on standard imaging, GH cannot be distinguished from NAFLD. GH can only be accurately diagnosed by liver biopsy showing collections of glycogen in hepatocytes.(3) Current consensus within the literature is that liver biopsy is critical for the diagnosis of GH. However, our position is that it would be reasonable to closely monitor liver function as glycemic control improves over the course of days to weeks. Since GH is ultimately a benign and self-limited condition, the risks and benefits of biopsy should be discussed and decided on an individual basis.

Conclusions: Mr. O presented with a common scenario of DKA and found to have a unique, and likely commonly missed, diagnosis of glycogenic hepatopathy. As most of these scenarios will happen in the inpatient setting it is key for Hospitalists to be aware of this diagnosis. An appropriate diagnosis may limit unnecessary additional testing and provide reassurance for the patient. 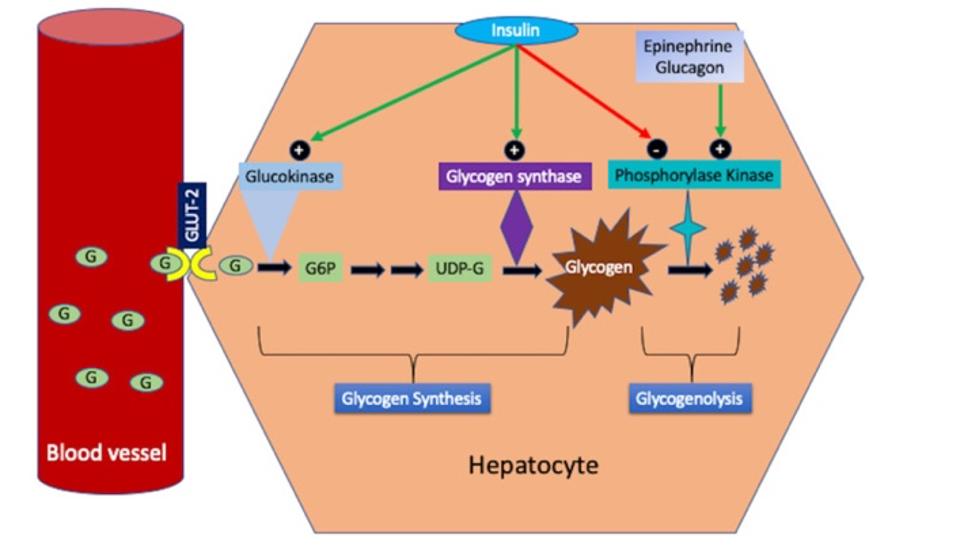 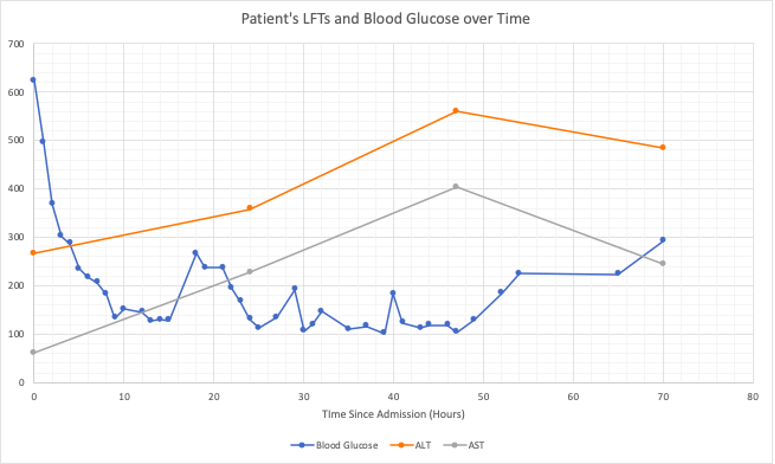 GLYCOGENIC HEPATOPATHY: AN UNDER RECOGNIZED COMPLICATION OF HYPERGLYCEMIA.