NOT SO SWEET: A CASE OF MISSED EUGLYCEMIC DIABETIC KETOACIDOSIS

Case Presentation: A 60 year old female with small cell cancer, type 2 diabetes on an insulin pump and empagliflozin, and recently diagnosed pulmonary embolus (PE) on apixaban presents to the hospital with intractable nausea with vomiting and symptomatic tachycardia. This patient presented 1 month prior with dyspnea and tachycardia and was found to have a PE and new invasive frontal sinus mass diagnosed as small cell carcinoma. She was started on chemotherapy, but since her last infusion, she has had intractable vomiting and inability to tolerate oral intake. She also reports shortness of breath and has noted heart rates of 130 at home. On arrival to the hospital, vitals notable for a heart rate in the 120s. Initial labs notable for bicarbonate 15 mmol/L, anion gap 21 mmol/L, normal lactate, blood glucose 140 mg/dL, urinalysis with ketones, and normal blood count. On day 1 of hospitalization, nausea felt to be related to chemotherapy and sinus tachycardia from dehydration and starvation ketosis causing her anion gap. Patient given intravenous anti-emetics and fluid. On day 2 of hospitalization, symptoms do not improve and patient remains tachycardic to the 120s, a CT Angiogram is obtained given her recent PE as well as an echocardiogram and are both normal. On day 3, patient becomes progressively tachycardic to the 150s, she is transferred to the ICU where labs notable for bicarbonate 10 mmol/L, beta-hydroxybutyrate 15 mmol/L. She is started on an insulin drip for DKA and her symptoms rapidly improve.

Discussion: This case demonstrates an atypical presentation of euglycemic DKA in a patient taking an SGLT2 inhibitor and insulin. Initial laboratory workup was strongly suggestive of DKA but due to the absence of hyperglycemia and alternative explanations for her symptoms, the correct diagnosis was initially missed. Euglycemic DKA is characterized as metabolic acidosis (pH < 7.3 or bicarbonate < 18 mmol/L), ketosis, and blood glucose levels less than 200 mg/dL. Cohort studies have demonstrated rates of DKA in patients treated with SGLT2 inhibitors as 2 per 1000 person-years with a hazard ratio of 2.85. When SGLT2 inhibitors are combined with insulin, lower doses of insulin are required to avoid hypoglycemia; this lower dose may be insufficient to prevent lipolysis and ketogenesis. Additionally, SGLT2 inhibitors reduce renal clearance of ketones. Both of these effects increase circulating plasma ketone levels and make patients vulnerable to DKA in the absence of hyperglycemia. In addition to patients taking SGLT2 inhibitors, euglycemic DKA can be seen in patients with poor oral intake, in pregnancy, and when insulin is administered prior to hospitalization.

Conclusions: Euglycemic DKA can be easily missed as it presents differently than typical DKA due to the absence of hyperglycemia and lack of profound dehydration. The increased use of SGLT2 inhibitors in recent years due to their benefits in diabetic kidney disease and congestive heart failure means that presentations such as this will be seen more frequently by hospitalists. Any patient on an SGLT2 inhibitor admitted with nausea, vomiting, or malaise with acidosis should have serum ketones obtained and this diagnosis should be considered. 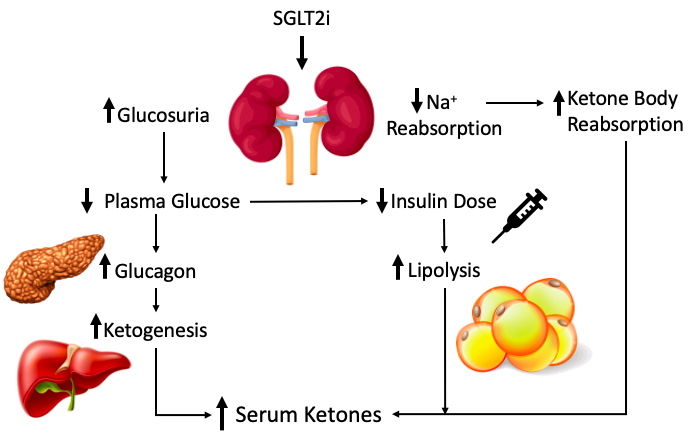 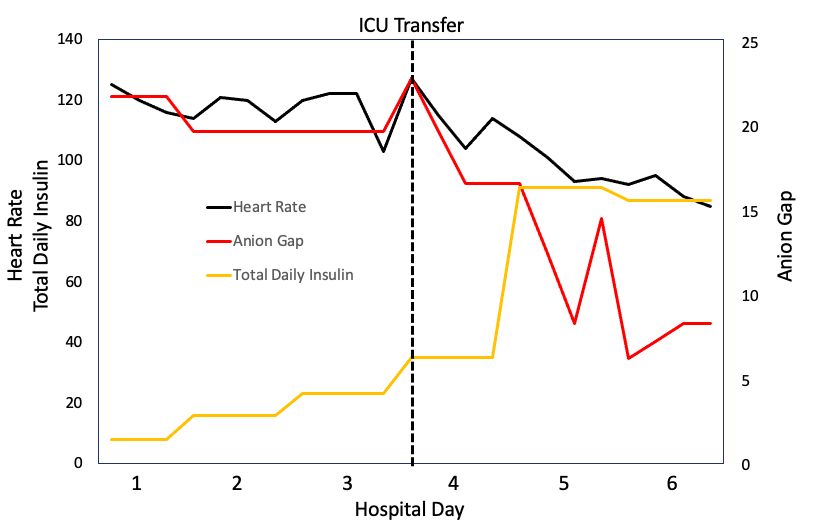 NOT SO SWEET: A CASE OF MISSED EUGLYCEMIC DIABETIC KETOACIDOSIS.