A CASE OF NATIVE VALVE ENDOCARDITIS COMPLICATED BY PURPURA FULMINANS

Case Presentation: A 49-year-old man presented to the Emergency Department with a two-day history of worsening chills. He was afebrile with HR 115 beats/minute, RR 22 breaths/minute, BP 120/93 mmhg. Pertinent findings on physical exam revealed an ill appearing male with a new facial rash and a new systolic murmur. Labs were significant for WBC 24K, PLT count 75K, procalcitonin 33, lactic acid 5.8, fibrinogen 153, D-dimer 107000. He was started on broad-spectrum antibiotics with Vancomycin and Cefepime. Unfortunately, he became hypoxic and required emergent intubation, vasopressor support with Norepinephrine & Vasopressin, and ultimately admission to the intensive care unit.On hospital day 2, he developed painful purpuric macules that spread to his chest, bilateral upper and lower extremities, with significant digital ischemia. Dobutamine infusion was started due to severe heart failure. Transthoracic echocardiogram (TTE) and subsequent transesophageal echocardiogram (TEE) revealed an ejection fraction (EF) of 25-30% with concerns for aortic valve vegetation. Streptococcus pneumoniae was confirmed on blood cultures from two peripheral samples and his antibiotics were switched to Ceftriaxone. Purpura fulminans was eventually diagnosed given the characteristic skin lesions and necrosis; bilateral lower extremity amputations were deferred until the patient’s clinical status improved.Additional history revealed a childhood diagnosis of Hodgkin’s lymphoma with subsequent splenectomy. He had also failed to follow up with appropriate vaccinations. His overall clinical condition improved, but he remained with significant disability due to ischemia and dry gangrene in both upper and lower extremities. He was eventually discharged to a long-term acute care hospital.

Discussion: Streptococcus Pneumoniae is a common cause of community acquired infections such as sinusitis and otitis media, however in asplenic patients there is an increased risk of fulminant sepsis. Purpura fulminans which is a rare highly lethal and rapidly progressive hemorrhagic skin necrosis, has also been commonly found in patients who are asplenic. The mechanism of action is non fully understood but mortality is often related to multiorgan thrombotic infarction. It is therefore important that, preventative strategies such as routine vaccinations and patient education should be prioritized for patients with asplenia. Pneumococcal endocarditis is a rare cause of infective endocarditis and is responsible for approximately 1 – 3% of the reported infective endocarditis cases. It commonly affects native aortic valves, often presenting as progressive heart failure as seen in this case. Mortality and morbidity is high often due to the delay in diagnosis, at which point there is usually destruction of the aortic valve. Early surgery is usually indicated and protective in these patients. Clinicians need to have a high index of suspicion for pneumococcal endocarditis with early initiation of antibiotics in as complications can prove fatal. 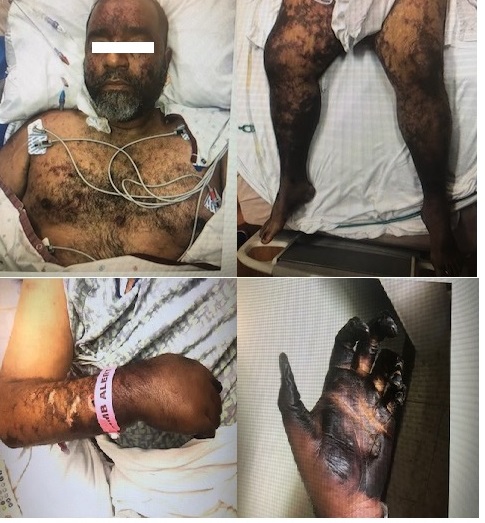 A CASE OF NATIVE VALVE ENDOCARDITIS COMPLICATED BY PURPURA FULMINANS.