A CASE OF POORLY CONTROLLED POLYCYTHEMIA VERA LEADING TO CHOREA

Case Presentation: A 76 y.o. female with history of chronic diastolic heart failure and poorly controlled polycythemia vera (PV) on 500 mg of hydroxyurea daily presented with 2 days of progressive difficulty breathing, sialorrhea and uncontrolled movements of the face and mouth. Due to general malaise, she stopped taking her furosemide and hydroxyurea 2 days prior to presentation and subsequently developed the above symptoms. On physical examination, continual rhythmic movements of the mouth and all 4 extremities were noted, and she had mild basilar pulmonary crackles. Labs were remarkable for elevated hematocrit (49.2) and leukocytes (84.6). We restarted her home hydroxyurea and furosemide leading to resolution of her dyspnea. However, her oral and extremity choreiform movements persisted, leading to severe anxiety. Hematology and neurology were consulted to evaluate for possible PV chorea and she was treated with two therapeutic phlebotomy draws, removing a total of 900 ml of blood. We also increased her Hydroxyurea dosage to 1500 mg daily. Over the subsequent 3-4 days her hematocrit stabilized below 40% with resolution of her choreiform movements and anxiety.

Discussion: Neurological sequelae manifest in 50-80% of PV cases, ranging from headache and vertigo to visual disturbances and stroke. Chorea is an infrequent complication seen in 0.5-5% of PV patients. Chorea can pose a diagnostic and therapeutic challenge with a wide differential including hereditary, metabolic and drug or toxin-induced. PV chorea is female predominant (5:2) and typically presents as an elderly patient with symmetrical, bilateral choreiform movements primarily involving the oro-facio-lingual muscles. The underlying pathophysiology of PV chorea is still largely unknown, but several mechanisms have been postulated, primarily related to erythrocytosis. One theory is that the hyper viscosity may reduce cerebral blood flow and impair tissue metabolism within the basal ganglia and thalamus. This chronic hypoperfusion of CNS structures results in increased susceptibility to metabolic or toxic insults. However, case reports with SPECT imaging studies to evaluate for changes in blood flow have been inconsistent. Other proposed mechanisms are receptor upregulation secondary to reduced serotonin and catecholamine levels and relative estrogen deficiency in postmenopausal females leading to receptor hypersensitivity and abnormal dopamine striatal activity. Onset of PV chorea is highly indicative of poor hematologic control and acute treatment of polycythemia usually leads to gradual resolution of symptoms as in this case.

Conclusions: While PV chorea is a rare diagnosis, a complete blood count in elderly patients presenting with chorea or other neurological manifestations can quickly identify this very treatable cause of chorea. Additionally, keeping uncontrolled PV in mind when approaching a patient with choreiform movements, can help identify severe leukocytosis or thrombocytosis before it leads to other consequences of uncontrolled PV, including deep vein thrombosis, pulmonary embolism and stroke. 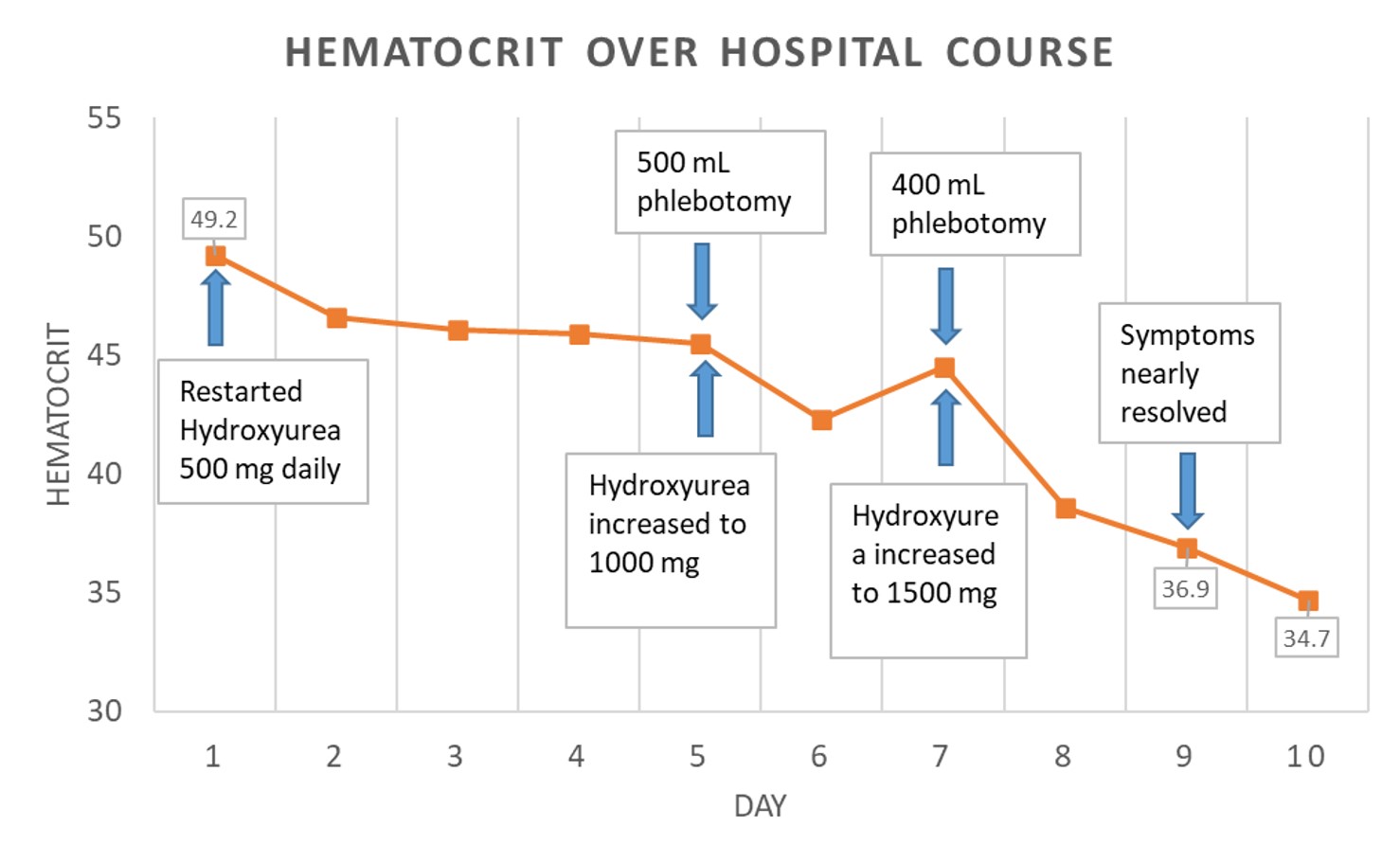 A CASE OF POORLY CONTROLLED POLYCYTHEMIA VERA LEADING TO CHOREA.