A Fatal Case of Gastrointestinal Zygomycosis in an Immunosuppressed Host

A 62‐year‐old man with a history of Wegener's granulomatosis presented to the emergency department with abdominal discomfort, low‐grade fever, and increasing confusion. The patient was on standard immunosuppressive therapy with cyclophosphamide, and a month prior to this admission he had had a relapse of WG and was started on rituximab; the replapse was complicated by pulmonary invasive aspergillosis, which required voriconazole treatment. On exam, the patient was tachycardic and appeared malnourished and lethargic. Abdominal exam showed epigastric tenderness with sluggish bowel sounds. Labs draw at the time of admission showed marked lymphopenia. CT scan of the abdomen showed free peritoneal air with possible distal ileal perforation. Surgical consultation was obtained, and he was taken to the operating room for exploratory laparotomy, which showed multiple areas of full‐thickness perforation involving the proximal jejunum and the distal ileum, requiring segmental resection. Histopathological examination revealed ischemic necrosis of the bowel wall with gross and microscopic evidence of perforation, infarction, and transmural infiltration by non‐septate, fungal hyphae consistent with Rhizopus species (Fig. 1). The patient died within 24 hours from overwhelming sepsis despite aggressive surgical intervention and antibiotics. 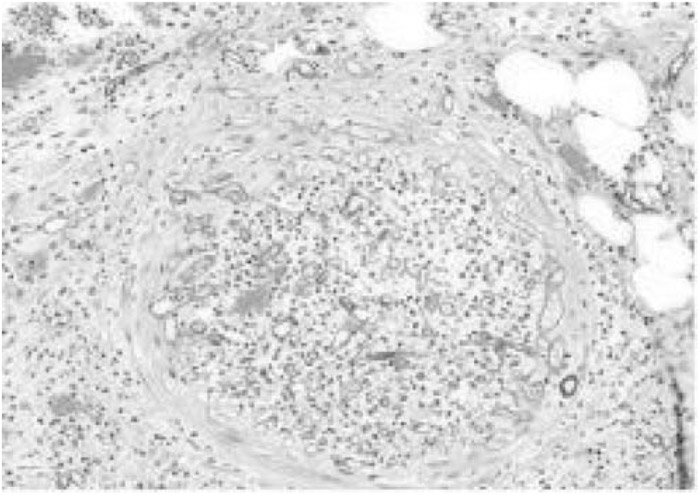 Zygomycosis is a ubiquitous saprophytic fungus present in soil and decaying organic matter that usually causes opportunistic infections in immunosuppressed patients. The hallmark of zygomycosis is angioinvasion, with vessel thrombosis, extensive tissue necrosis, and propensity to hematogenous dissemination. The fungus causes deep tissue disease after inhalation, accidental inoculation, or ingestion of the fungal spores. The most common form of zygomycosis is rhinocerebral, with pulmonary and cutaneous forms being less common. Gastrointestinal zygomycosis is relatively rare, with the stomach and colon the most frequent sites of involvement. Risk factors for gastrointestinal zygomycosis include malnutrition (kwashiorkor), premature birth, and immunosuppression. Use of newer, broad‐spectrum antifungal agents such as voriconazole has also been implicated; however, whether this is association or causation remains unknown.

The likely cause for zygomycosis in this patient was multifactorial including severe immunosuppression and malnutrition. The association or causation of voriconazole in invasive zygomycosis is of debate, with preliminary studies from an animal model demonstrating increased virulence of the fungus when exposed to the drug. Treatment for gastrointestinal zygomy‐cosis remains early surgical debridement along with administration of amphotericin B, although overall survival remains poor.

A Fatal Case of Gastrointestinal Zygomycosis in an Immunosuppressed Host.