A MOST RARE RENAL MASS

An 18 year-old Hispanic female presented to a tertiary care center with six days of left-sided flank pain and gross hematuria. Upon further questioning, she additionally endorsed  two to three months of generalized malaise and unprovoked weight loss totaling eight pounds. She had been discharged from a nearby hospital one day prior to presentation, where she was reassured of the benign nature of her condition, and scheduled for outpatient follow up. When symptoms failed to resolve over the next day, she presented to our facility seeking a second opinion.

Upon admission, a routine renal ultrasound was obtained to rule out obstruction or parenchymal disease. Results were significant for a left-upper pole, solid renal mass. To further characterize the lesion, a magnetic resonance imaging (MRI) study of the abdomen, with and without contrast, was obtained. This revealed a malignant-appearing left renal mass, extensive periaortic adenopathy, a paravertebral soft tissue mass, bony metastatic lesions in the lumbar spine and numerous hepatic lesions consistent with extensive metastasis. MRI of the brain failed to reveal any evidence of metastasis.

A subsequent liver biospy confirmed a final diagnosis was renal medullary carcinoma. Genes expressed by the malignancy included PAX8, CK19, FLI-1, EMA and, to a variable degree, pan-cytokeratin and CK7.

After confirmatory testing and staging, our patient began an aggressive but largely palliative chemotherapy and radiation treatment regimen. Based on the histologic findings and genetic profile, her projected life expectancy was approximately three months.

Renal medullary carcinoma (RMC) is an extremely rare and rapidly progressing malignancy, accounting for less than 1% of renal neoplasms. It almost exclusively inflicts young patients with sickle cell trait or sickle cell disease1. It most commonly presents as hematuria, weight loss and abdominal or flank pain in a young African-American male. Diagnosis is often delayed or made post-mortem, resulting in failure to develop effective treatment strategies. For confirmed cases, median overall survival is < 12 months, owing to the fact that metastasis is almost always present at the time of diagnosis2. We present the case of an 18 year old Hispanic female with hematuria and flank pain, subsequently found to have RMC upon further investigation.

RMC is among the rarest of renal malignancies, and to date only 182 cases have been reported in the English literature. The vast majority of these have been observed in African-American patients, with only 5% of cases occurring in Caucasians and Hispanics (reference). Henceforth, this case of a Hispanic female with sickle cell trait was of the rarest variety.

Patients with RMC typically present with nonspecific symptoms, including hematuria, abdominal pain, fever and weight loss. Our patient, therefore, had a prototypical presentation, similar to that of patients reported in the medical literature. 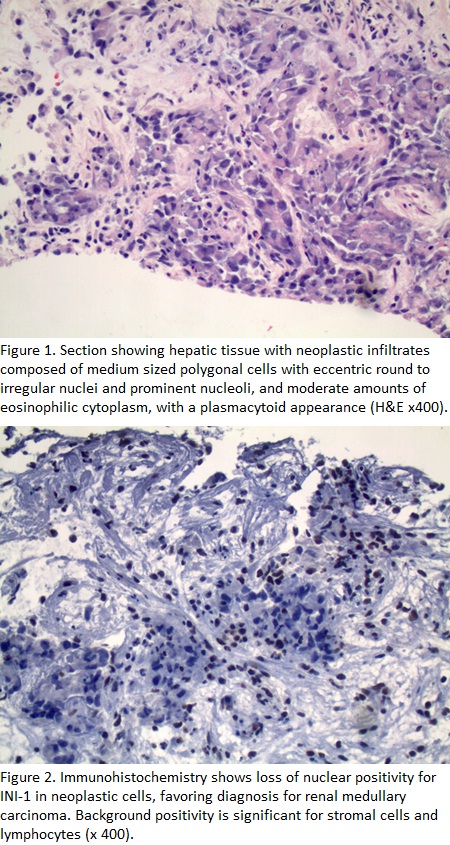 A MOST RARE RENAL MASS.