Case Presentation: A 61-year-old male presented with complaint of left arm swelling with left axillary lump, which had been worsening for two months. He reported of having a dark-colored left forearm skin lesion which he reportedly removed by himself 15 years ago without seeking medical care. Computed Tomography of chest revealed too numerous to count bilateral pulmonary nodules and masses, extensive left axillary, mediastinal, epigastric, and periesophageal lymphadenopathy, concerning for metastatic spread of disease. CT abdomen and pelvis demonstrated extensive retroperitoneal, upper abdominal adenopathy, and hepatomegaly with likely metastatic lesions. MRI brain negative for any metastatic lesions. Histopathological examination of left axillary revealed metastatic melanoma. Initially, laboratory showed phosphorous 3.8 mg/dL, potassium 5.1 mmol/L, calcium 9.3 mg/dL, and uric acid 9.6 mg/dL. Of note, he also had lactic acidosis throughout hospitalization. Phosphorus steadily increased to a max of 6.0 mg/dL and potassium to 5.9 mmol/L. Calcium decreased to 7.1 mg/dL. He also presented with acute oliguric renal failure. He was hydrated and treated with allopurinol initially and then a dose of Rasburicase for hyperuricemia, and calcium supplement for hypocalcemia. His condition continued to deteriorate, and he was eventually discharged to a hospice facility where he died a couple days later.

Discussion: Tumor lysis syndrome is a life-threatening process that results in hyperkalemia, hyperuricemia, hyperphosphatemia, and hypocalcemia often resulting in renal failure. Cairo and Bishop proposed diagnostic criteria for TLS stratified into laboratory and clinical TLS. Diagnosis of laboratory TLS is based on phosphorus (>4.5 mg/dL), potassium (>6.0 mmol/L), calcium (<7.0 mg/dL), and uric acid (>8.0 mg/dL) with two or more of these abnormal levels occurring simultaneously (1). Clinical TLS was defined as the presence of laboratory TLS with a creatinine 1.5 the upper limit of normal, cardiac arrhythmia/sudden death, or seizure. TLS is more commonly associated with hematologic cancers such as non-Hodgkin’s Lymphoma and leukemia. More recently, more cases of TLS have been reported in a number of different types of solid tumors including, lung cancers, breast cancers, gynecological cancers, genitourinary cancers, gastrointestinal cancers, neurological cancers, and skin cancers. TLS has been reported in malignant melanoma. However, in most case reports, TLS occurs after initiation of treatment. To our knowledge there have been two other reports of spontaneous TLS occurring without treatment. The risk factors for developing TLS are a high tumor proliferation rate, large tumor burden, chemo-sensitivity, and increased LDH concentrations. Interestingly, in all 10 cases reporting TLS associated with malignant melanoma that we found, liver metastasis was reported. In our case, CT findings were concerning for metastatic spread to the liver. A recent pooled analysis of 132 published cases of TLS found that 72% of patients had metastatic liver disease, and liver metastasis was found to be an independent predictor for increased mortality.

Conclusions: Spontaneous TLS with metastatic melanoma is a rare occurrence. Although patient neither receive chemotherapy and nor have hematologic malignancies, hospitalists should always have TLS as a differential diagnosis in patient with malignancy who demonstrates laboratory abnormalities. 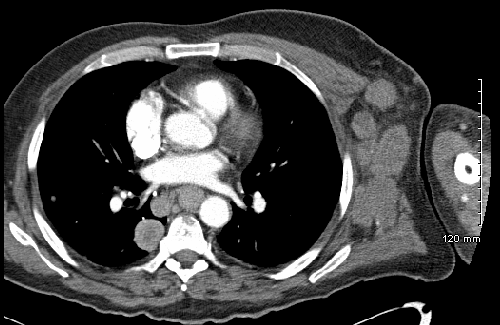 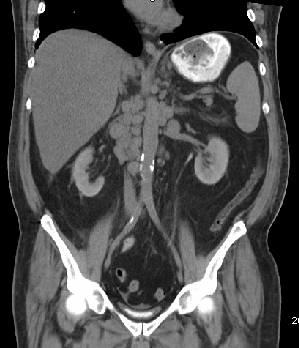