A SHOCK TO THE HEART: A RARE CASE OF CORONARY ARTERY EMBOLISM

Nikesh Rohit Kapadia, MD*1;Mauricio Valenzuela, MD2 and Angel Iran Martin, MD1, (1)University of South Florida, Tampa, FL, (2)University of South Florida Internal Medicine Residency, Tampa, FL
Meeting: Hospital Medicine 2017, May 1-4, 2017; Las Vegas, Nev.
Abstract Number: 514
Category: Clinical Vignettes
Sub-Category: Adult
Keywords: Cardioversion, Coronary Embolism, Myocardial Infarction, Right Coronary Artery Embolism and STEMI
Case Presentation: A 68-year-old man with a history of atrial flutter and recurrent gastrointestinal (GI) bleeds (GIBs) with no clear etiology identified presented for planned direct current synchronized cardioversion.  Patient had failed multiple rate and rhythm control regimens as well as radiofrequency ablations.  He was placed on unfractionated heparin prior to cardioversion but developed recurrent melena.  The heparin was stopped with resolution of the melena but was unable to undergo esophagogastroduodenoscopy or colonoscopy due to persistent rapid atrial flutter.  After discussions about risks of cardioversion without anticoagulation, patient elected to undergo the procedure.  The pre-procedure transesophageal echocardiogram (TEE) revealed no evidence of intra-cardiac thrombi. Patient was successfully cardioverted to normal sinus rhythm and discharged the same day without issues.  He was not placed on any anticoagulation agents due to his previous GIBs.  He returned the following day with chest pain and diaphoresis.  An electrocardiogram revealed ST elevations in the inferior leads (II, III, aVF) consistent with an inferior ST-elevation myocardial infarction (STEMI).  A left heart catheterization revealed a thrombus occluding the proximal right coronary artery (RCA) with no obstruction in the rest of the coronary arteries.  Balloon angioplasty and aspiration thrombectomy were attempted.  Coronary flow was established from the proximal to the middle portion of the RCA.  However, the thrombus migrated to the distal portion of the RCA.  A transthoracic echocardiogram (TTE) performed three days after his STEMI revealed a reduced left ventricular ejection fraction with no evidence of intra-cardiac thrombi.  Overall, his symptoms resolved and was discharged on aspirin with no other anticoagulation agents.  Upon review of his coronary anatomy, location of the thrombus, its migration without residual clot burden and chronological association with cardioversion, was highly suggestive of an embolus that originated in the left ventricle.

Embolization in the coronary arteries has been described as a cause of acute myocardial infraction (AMI) in 10-13% of cases based on autopsy studies.  It is a rare phenomenon that has been associated with synchronized cardioversion.  Other causes include emboli formation due to valvular disease, endocarditis, intra-cardiac tumors as well as iatrogenic procedures (cardiac surgery or left heart catheterization).  The management strategies of AMI due coronary embolism include intracoronary thrombolysis, aspiration thrombectomy and stent placement which were developed primarily for atherosclerotic obstructive disease.  The most common site of embolization is the left anterior descending artery and its branches.  Our patient presented with embolization in the RCA, which is rare.  Diagnosis is suggested by presentation with an AMI in the setting of non-obstructive coronary artery disease and risk factors for embolization. 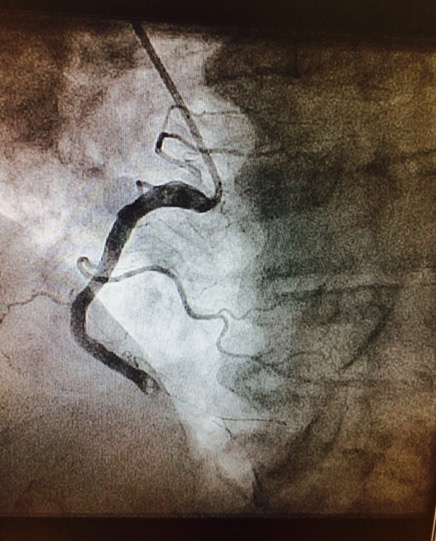 A SHOCK TO THE HEART: A RARE CASE OF CORONARY ARTERY EMBOLISM.