Case Presentation: We present a case of 71 year old male with a history of advanced non-small cell lung cancer with metastasis to the brain, recurrent deep venous thrombosis on anticoagulation, and prostatomegaly who was initially admitted for dyspnea and subsequently diagnosed with community acquired pneumonia. His chest x-ray on admission also showed heavy burden of metastatic disease, perihilar scarring, and small left pleural effusion. He was severely malnourished with over fifty pound weight loss in the preceding year and there was concern of ongoing aspiration. Broad spectrum antibiotics were initiated. Following multiple episodes of desaturations on the medicine floor, he was transferred to the intensive care unit and eventually required intubation and subsequent tracheostomy creation as well as enteral feeding access with placement of a percutaneous endoscopic gastrostomy (PEG) tube before being transferred back to the medicine floor. On day 17 of hospitalization, he developed sudden generalized abdominal pain and distension without peritonitic signs. His PEG tube was subsequently noted to drain undigested tube feeds. Computerized tomography of the abdomen and pelvis was obtained which showed marked distention from the stomach to the level of the third portion of the duodenum where there was abrupt caliber change at the level of the superior mesenteric artery which was ultimately felt to represent SMA syndrome. General surgery was consulted and his PEG tube was placed to gravity drain. Given his comorbidities and overall frail state, he was ultimately deemed to be a poor surgical candidate. Approximately four days later, patient experienced abrupt worsening of his abdominal pain with nausea and vomiting as his PEG tube began to drain copious amounts of green biliary fluid. Shortly thereafter, he went into pulseless electrical activity and unfortunately passed away.

Discussion: Proximal intestinal obstruction can result from external compression due to a variety of causes, commonly manifesting with nonspecific abdominal pain and vomiting. Common etiologies include hepatomegaly, periportal lymphadenopathy, masses, and adhesions from prior abdominal wall surgeries. SMA syndrome is a rare cause of duodenal obstruction. Normally, the superior mesenteric artery is encased by fatty tissue as it branches off the anterior abdominal aorta. This mesenteric fat pad creates separation as the SMA transverses the third portion of the duodenum at the level of the L3 vertebra. In patients with significant weight loss, loss of abdominal fat can lead to a decreased angle of separation between the SMA and small bowel leading to compression. Intestinal obstruction is associated with multiple complications including infection, renal failure, and metabolic derangements resulting in a high overall rate of morbidity and mortality.

Conclusions: This unusual presentation of SMA syndrome highlights the importance of considering non-gastrointestinal tract pathologies in the differential for patients who develop abdominal pain as well as the importance of optimizing nutritional status in patients with advanced malignancy. 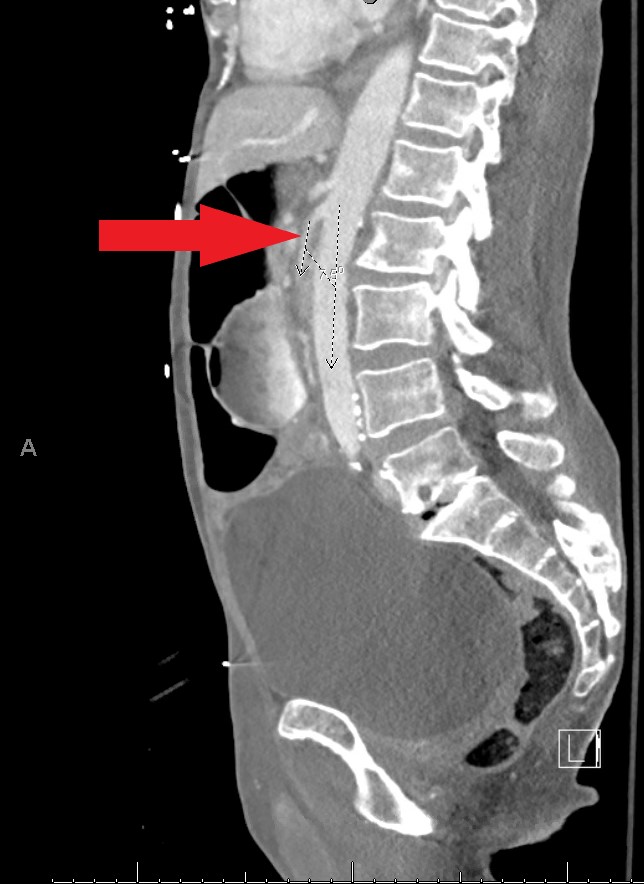