Altered Mental Status: It’s All About the Amyloid

A 75 year old male with a past medical history of myocardial infarction, hypertension and diabetes was brought to the emergency room for altered mental status. During a cross‐country trip, the patient was found unconscious in his car, covered in urine with a blood glucose level over 400 mg/dL. Upon arrival to the emergency room, he was confused, tachycardic, hypertensive and oriented to person only. On physical exam, he had bilateral lower extremity pitting edema. A chest x‐ray revealed borderline cardiomegaly with clear lungs. He was given insulin for the hyperglycemia (no anion gap) and admitted for an altered mental status workup. The laboratory workup for his altered mental status was unremarkable. An EEG demonstrated diffuse cerebral dysfunction without any epileptiform activity. Intracranial imaging did not reveal any evidence of acute stroke, but it did demonstrate diffuse microhemorrhages consistent with cerebral amyloid angiopathy. Additionally, a sonogram of the patient’s lower extremities demonstrated extensive bilateral deep vein thrombosis. Prior to initiating anticoagulation, neurology was consulted and recommended avoiding anticoagulants and antiplatelet agents given the increased risk of intracerebral bleeding in patient with cerebral amyloid angiopathy. An IVC filter was subsequently placed. During the course of the admission, his family was located. They confirmed that his mental status had declined considerably over the last year with increased agitation, failure to care for self and difficulty performing activities of daily living. The patient’s acute mental status change was likely secondary to metabolic encephalopathy but his progressive decline was secondary to amyloid angiopathy. He improved with supportive care and was discharged home in the care of his family.

Cerebral amyloid angiopathy (CAA) is characterized by deposits of amyloid beta peptide within small to medium sized blood vessels of the brain. As a result, the blood vessel walls weaken and become prone to bleeding. CAA can occur as a sporadic disorder or in association with Alzheimer’s disease. It can cause transient neurological symptoms and can contribute to cognitive impairment. The consequences of CAA are highlighted in this case by the patient’s progressive cognitive decline which ultimately resulted in metabolic encephalopathy (failure to comply with medications). Furthermore, the management of the patient’s thrombus was affected by the presence of the CAA, as the increased risk of intracerebral bleeding outweighed the benefits of anticoagulation. There is currently no cure for CAA. Management includes blood pressure control and avoidance of antiplatelet and anticoagulant drugs.

Cerebral amyloid angiopathy is a disease entity that is still poorly understood. Complications include dementia and an increased risk of intracranial bleeding, especially in the elderly. Morbidity and mortality associated with CAA is significant. Further research is necessary to advance the understating of this disease process. 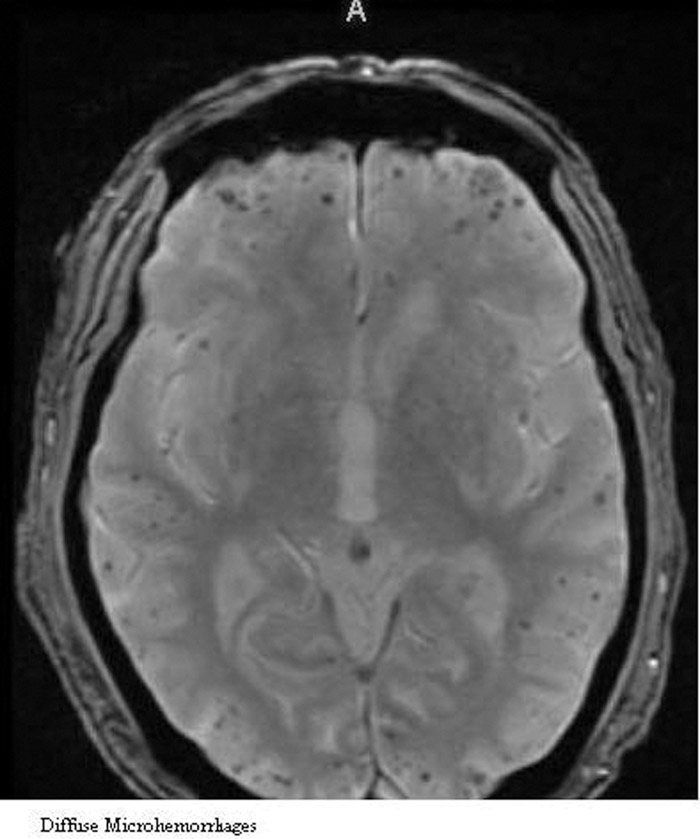 Altered Mental Status: It’s All About the Amyloid.