Case Presentation: A 69 year old male with COPD and a 6-year history of a slowly progressing left upper lobe cavitary mass presented to our hospital with new hemoptysis. CT angiogram showed the cavitary mass infiltrating into an artery, as well as a pseudoaneurysm in the left lower lobe consistent with mycobacterial invasion of the arterial wall. Chart review showed that the patient had been diagnosed with Mycobacterium chimaera lung infection just two months prior. He had had ongoing fevers, fatigue, dyspnea, cough and weight loss for 6 years, with multiple recent hospitalizations for presumed COPD exacerbation. Bronchoscopy 4 years ago had been negative for fungus, acid-fast bacilli or malignancy. After his fifth hospitalization, sputum was sent for AFB smear and culture, resulting in the diagnosis of M. chimaera. He was started on rifampin, ethambutol and azithromycin, later switched to clarithromycin. After two months of therapy, he was overall improved, aside from the new hemoptysis. He reported an improvement in cough, fatigue and shortness of breath, and the cavitary mass was slightly decreased in size on imaging. His low-volume hemoptysis resolved 2 days after admission and he was discharged home.

Discussion: M. chimaera, a member of the Mycobacterium avium complex (MAC) group, was first described in 2004. A retrospective study of patients with MAC infections conducted in Chicago showed that M. chimaera has become the second most common cause of MAC infection, being surpassed only by M. avium itself. Its primary mode of transmission, like for many of the other MAC bacteria, is via municipal or natural water sources. A distinguishing characteristic of M. chimaera is its association with post-operative infections in cardiothoracic surgery patients, via contamination of the water reservoirs in ECMO machines. In this case, the patient had no history of cardiothoracic surgery. M. chimaera causes predominantly two types of disease: pulmonary infections in patients with underlying chronic lung disease, and disseminated disease in immunocompromised patients. There is a lengthy incubation period between exposure and manifestation of symptoms, ranging from 3 to 72 months. Symptomatically, M. chimaera resembles TB, causing fevers, cough, dyspnea, weight loss, night sweats, hemoptysis and chest pain. The majority of patients with pulmonary M. chimaera have small nodules and bronchiectasis on imaging, although a sizable minority are found to have cavitary lesions. Our patient, an older white male with COPD, represents one of the classic presentations of pulmonary M. chimaera infection. The diagnosis is made by sending at least 3 early-morning sputum samples for AFB smear and culture. Treatment consists of a rifamycin, a macrolide and ethambutol, for a minimum of 12 months.

Conclusions: It is important to consider nontuberculous mycobacterial infection in patients who present with a chronic pulmonary infiltrate and TB-like symptoms. M. chimaera typically causes infections in patients with underlying lung disease or immunosuppression, and thus its clinical presentation and radiographic findings can easily be misattributed to the predisposing conditions. Hospitalists should have a low threshold to send sputum samples for AFB testing on such patients. 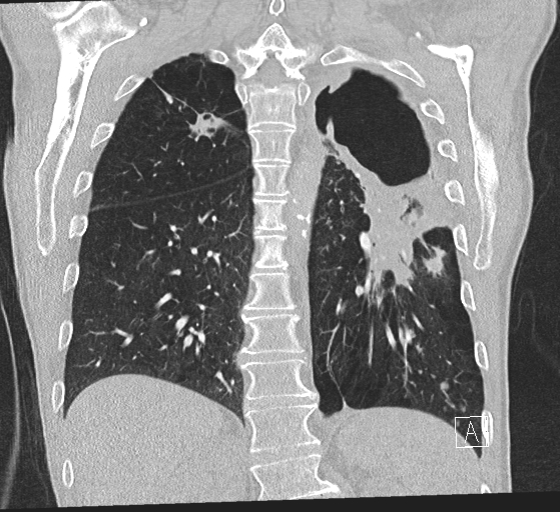