ANALYSIS OF RESPIRATORY KINEMATICS (ARK) FOR QUANTITATIVE CHARACTERIZATION OF LABORED BREATHING: A DEMONSTRATION OF TECHNICAL FEASIBILITY AND CONSTRUCT VALIDITY

Methods: We developed the Analysis of Respiratory Kinematics (ARK) system, a proprietary network of unobtrusive motion sensors, to visualize and quantitatively characterize breathing motion patterns (i.e. respiratory kinematics) (9). In an ongoing study, we are characterizing brief recordings (up to 2 minutes) of signals obtained by applying this system to patients during hospital encounters for respiratory symptoms (target n = 120 patients). We developed novel metrics that characterize the major labored breathing patterns (RR, RRV, RAM, RA, and PAM). To ensure construct validity (i.e. to ascertain that the metrics truly relate to the clinical phenomena of interest) and demonstrate technical feasibility, we visualized the signals along with the labored breathing metrics derived from them. Figures 1 and 2 contain illustrative examples of our metrics and convey the diversity of breathing patterns that we encountered in our study.

Results: Figure 1 shows 30-second ARK strips from which we extracted instantaneous RR time series. Average RR and RRV can be quantified using time series characteristics like mean, variance, sample entropy, an many more (10). Figure 2 shows the metrics for PAM (2A), RAM (2B), and RA (2C) that were extracted by comparing synchrony (2A) and magnitude (2B, 2C) of motion at key sensor locations. In each instance, the clinical phenomenon of interest was appropriately quantified by our metric.

Conclusions: Quantitative characterization of labored breathing using the ARK system is technically feasible. This may yield a novel suite of respiratory vital signs with adequate construct validity. An analogy with blood pressure measurement conveys the potential impact. Before the invention of sphygmomanometers, clinicians used qualitative descriptions of blood pressure based on manual compressibility of the pulse. When blood pressure became readily measurable at the bedside, its enormous utility was harnessed and entirely new pathophysiologic insights were uncovered. Currently, clinicians use qualitative descriptions of labored breathing. The ARK system can make labored breathing readily measurable at the bedside and unleash its diagnostic and prognostic power. 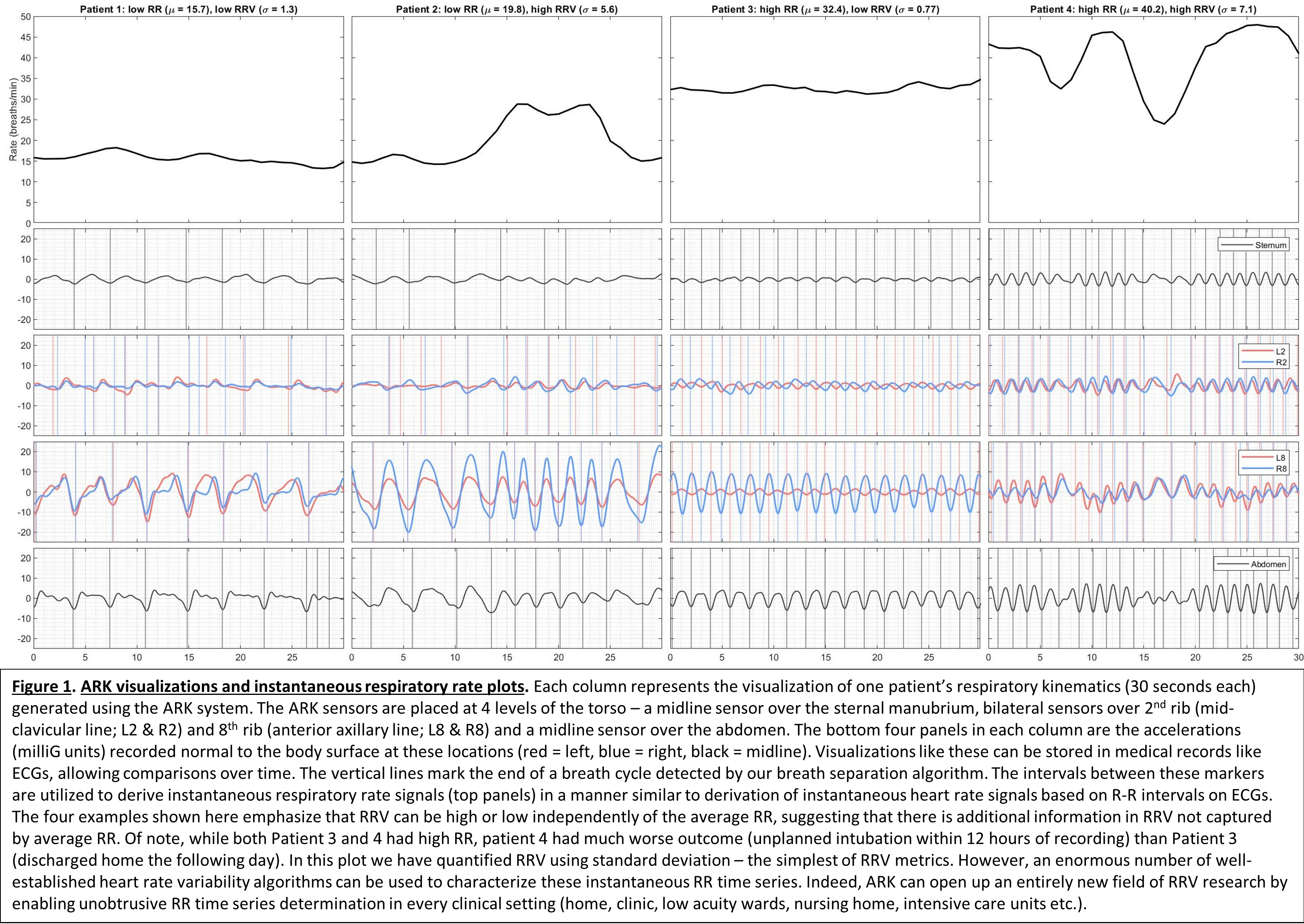 ANALYSIS OF RESPIRATORY KINEMATICS (ARK) FOR QUANTITATIVE CHARACTERIZATION OF LABORED BREATHING: A DEMONSTRATION OF TECHNICAL FEASIBILITY AND CONSTRUCT VALIDITY.