Previous research has explored the impact of delayed ICU transfer on patient outcomes, but the subjective nature in defining onset of critical illness in many of these studies has made it difficult to accurately quantify this association.  We sought to investigate this impact using the electronic Cardiac Arrest Risk Triage (eCART) score, a previously published early warning score comprised of demographic, vital sign, and laboratory data, as an objective marker of critical illness onset.

We conducted a retrospective cohort study that included all patients admitted to the medical-surgical wards at five hospitals between November 2008 and January 2011.  eCART scores were calculated for all patients on the wards and the score cut-off corresponding to a specificity of 95% for ICU transfer (eCART >=60) was defined as the value denoting critical illness.  Cardiac arrest on the wards with attempted resuscitation was counted as an ICU transfer at the time of arrest. Time from first critical eCART value to ICU transfer was extracted for each patient, and a logistic regression model adjusting for age, sex, and surgical status was used to calculate the association between time to ICU transfer and in-hospital death. Based on previous literature, delayed ICU transfer was defined as occurring more than 6 hours after onset of critical illness.

Our analysis included 3,789 medical and surgical patients, with a mean age of 69 years (+/- 15.7) and mean eCART score of 107 at the time of transfer. The median time from first critical eCART score to ICU transfer was 5.4 hours. Delayed transfer (>6hrs) occurred in 46% of patients (n=1,734) and was associated with increased mortality (33.2% vs. 24.5%, p<0.001).  This relationship was linear with each one-hour increase in transfer delay and was associated with an adjusted 3% increase in odds of in-hospital death (p<0.001) (Figure 1). Additionally, in patients who survived to hospital discharge, delayed transfer was also associated with longer total hospital length of stay by two days (13 vs. 11, p<0.001).

Delayed ICU transfer is associated with significantly increased hospital length of stay and mortality.  This association highlights the need for ongoing work towards both the implementation of an evidence-based risk stratification tool as well as development of effective critical care outreach resources for patients decompensating on the wards.  Real-time use of a validated early warning score such as eCART could potentially lead to more timely ICU transfer for critically ill patients and reduced rates of preventable in-hospital death. 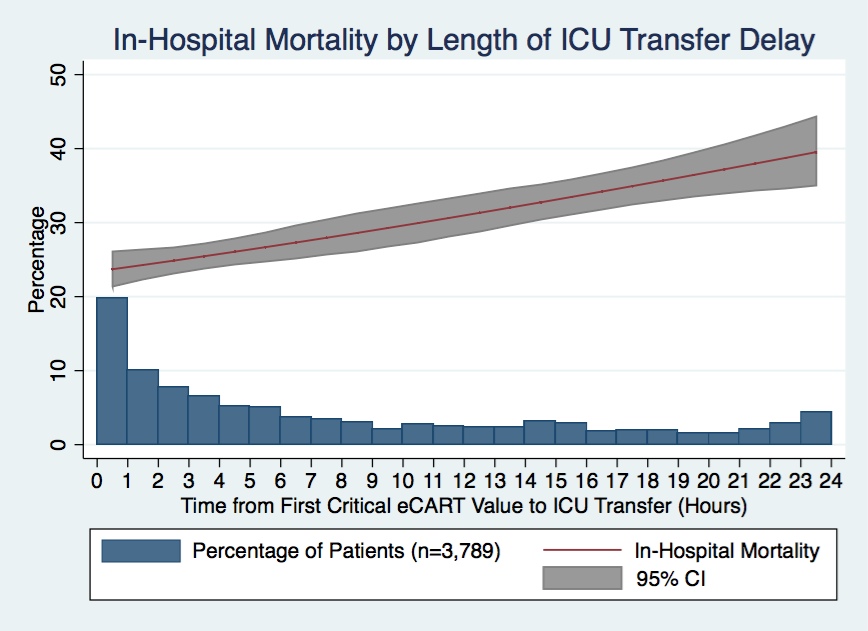