Background: Patients who undergo interhospital transfer commonly have complex medical issues requiring higher levels of care and are often at an increased risk of mortality. Consequently, code status discussion is an important part of this process as a patient’s clinical status or desires may change during hospitalization. As a result, unwanted or unnecessary measures can be avoided and resources used more judiciously.

Methods: We performed a retrospective chart review of patients transferred to a tertiary care referral center in the southeast from October 2015 through April 2017 to identify the code status on admission and at discharge or time of death. Patients included in the study were 18 years and older. Patients who signed a research waiver were excluded. Demographic and clinical variables were abstracted from the patients’ electronic medical record and included age, gender, code status on arrival (hospital admission) and discharge/death, reason for transfer, admission service, medical comorbidity, LOS and discharge disposition. Patients who changed code status during hospitalization were compared to those who did not. Continuous variables were compared using Wilcoxon rank sum test and categorical variables using Pearson Chi-square test.

Results: 707 patients were transferred during the study period (Table 1). Of the 707 patients 653 (92.3%) patients did not change code status, while 54 patients (7.6%) did. Both cohorts were similar with respect to age (p=0.56), gender (p=0.82) reason for transfer (p=0.56).The majority of patients in each group were full code on admission (p=0.74). The most common code status change in both cohorts was full code to DNR (p=0.82). Cohorts had similar medical comorbidity while patients admitted to critical care were more likely to change code status (p=0.0001) and patients admitted to cardiology were less likely to change code status (p=0.05). Patients who changed code status had a longer LOS (p=0.0002), more often died and were less likely to be discharged home (p=0.0001) (Table 1).

Conclusions: Patients who were transferred to a tertiary care referral center infrequently changed code status following transfer. Patients who did more often were admitted to critical care, had a longer LOS and died reflecting higher illness acuity. Goals of care discussion is an important part of the transfer process especially with critically ill patients and their families to minimize the burden of transfer for care that has little impact on outcomes. More study is needed into the interplay of physician communication, family decision-making, and administrative resources in the decision to transfer.

IMAGE 1: Table 1. Demographic and clinical variables of patients who did and did not change code status. 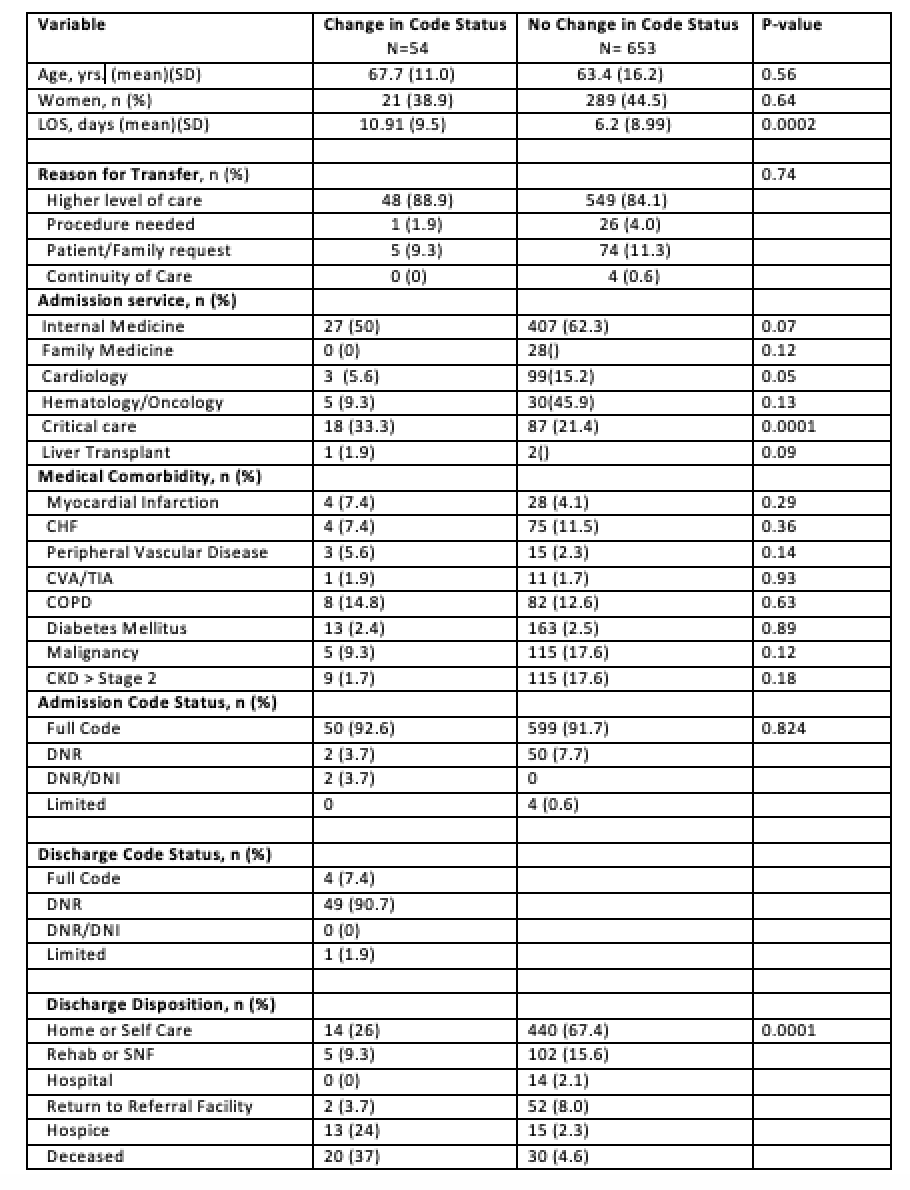