Case Presentation: An 83 year old woman presented with acute anemia on outpatient testing. One week prior, during hospitalization for a pelvic fracture, she had been started on antibiotics for a suspected urinary tract infection. When this failed to resolve her symptoms, she was discharged on oxybutinin and phenazopyridine. Hemoglobin on admission was found to be 5.9. Due to recent change of residence, a baseline hemoglobin was not available. Lab work showed a macrocytic anemia with increased LDH and undetectable haptoglobin, suggesting intravascular hemolysis. A coombs test was negative. On further questioning, it was found that the patient had a history of glucose-6-phosphate dehydrogenase (G6PD) deficiency. The phenazopyridine was discontinued. She was transfused with 2 units of blood, started on folic acid supplement and her hemoglobin improved to 9. It remained stable thereafter.

Although it is an X-linked recessive disorder, heterozygous women may experience the full spectrum of disease based on the lyonization pattern of their affected X chromosome. Deficient erythrocytes in heterozygous women are as vulnerable to hemolysis as those in homozygous men. In the case of our patient, it was thought that the addition of phenazopyridine to her regimen led to the hemolytic crisis. Phenazopyridine as a cause of increased oxidative stress causing a G6PD crisis had been described in the literature since the early 1960s. Other common drugs which are unsafe for these patients are shown in Table 1. It would seem appropriate, therefore, to ask patients about a personal or family history of G6PD before prescribing phenazopyridine, and to keep in mind that a presentation of hemolytic anemia after use of this drug should prompt a work up.

Conclusions: Phenazopyridine is a widely available over-the-counter urinary tract analgesic used for the treatment of dysuria. While medicines like asprin, sulfonamides, and anti-malarials are classically associated with hemolysis in patients with G6PD deficiency, therapeutic doses only affect those with the most severe manifestation of disease. However, over-the-counter doses of medications like Phenazopyridine have been found to induce hemolysis in those with the mildest degree of deficiency. 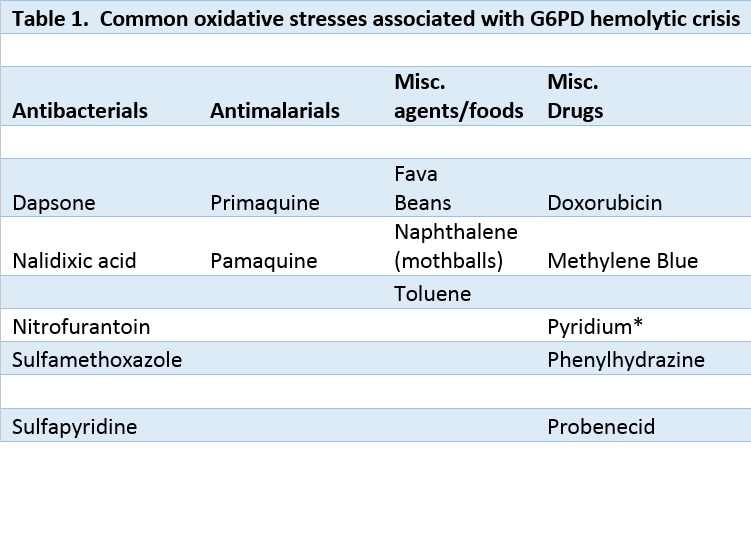