DELAYED DIAGNOSIS IN A CASE OF POLYNEUROPATHY: AN ALL-TOO-COMMON REFRAIN

Case Presentation: A 61-year-old man with a history of hypertension and type 2 diabetes mellitus developed tingling, numbness, and burning pain in his feet and calves. He was prescribed gabapentin for presumed diabetic neuropathy but had no relief. Five years later, on a routine MRI of the spine for chronic low back pain, multiple sclerotic lesions were incidentally noted throughout the lumbar vertebral bodies and sacrum. Subsequent CT and PET scans to evaluate for malignancy confirmed the lesions, but no other significant abnormalities were found. A serum M-protein was 0.2 g/dL (normal range < 3 g/dL). A bone biopsy showed a monoclonal plasma cell dyscrasia and bone marrow biopsy showed no evidence of plasma cell myeloma. An oncologist recommended observation.Over the next three years, his neuropathy significantly worsened with progression to the upper extremities and he had difficulty ambulating. He also developed lower extremity swelling. A transthoracic echocardiogram was normal. Electromyography showed a severe peripheral neuropathy of the upper and lower extremities with both motor and sensory nerve involvement. Repeat testing showed an IgG lambda monoclonal gammopathy, M-protein of 0.2 g/dL (stable), and elevated beta-2 microglobulin of 7.2 mg/L (normal range 1.0-2.6 mg/L).Shortly afterward, he was admitted with acute kidney injury due to urinary retention that resolved with placing a urinary catheter. During that admission, he requested further evaluation for his long-standing neuropathy. Upon further review of his history (particularly the monoclonal gammopathy and sclerotic bone lesions), POEMS (Polyneuropathy, Organomegaly, Endocrinopathy, Monoclonal protein, Skin changes) syndrome was considered. Papilledema was noted on fundoscopic exam. Thrombocytosis and hypothyroidism were also found on further testing. Even though the serum vascular endothelial growth factor (VEGF) level was normal, he met diagnostic criteria for POEMS syndrome based on the presence of polyneuropathy, monoclonal gammopathy, sclerotic bone lesions, hypothyroidism, thrombocytosis, lower extremity edema, and papilledema. He was treated with lenalidomide.

Discussion: Due to the heterogeneity of clinical presentations, POEMS syndrome remains challenging to diagnose despite criteria to standardize the diagnosis (Table). According to one cohort study, the median time between onset of symptoms and diagnosis was 15 months (range of 3-120 months).[1] Another study suggested that as many as 60% of POEMS syndrome cases are initially misdiagnosed as chronic inflammatory demyelinating polyneuropathy.[2] In this case, the diagnosis was made approximately 8 years after onset of neuropathic symptoms and 2.5 years after sclerotic bone lesions were found. If treatment is started early, it can slow the progression of symptoms. Because POEMS syndrome is rare and presentations varied, the possibility should be considered early even when only some of the diagnostic criteria are known.

Conclusions: POEMS syndrome is a rare and often unrecognized disease that is best treated when identified early. Hospitalists should be aware of the diagnostic criteria and consider POEMS syndrome as a possibility when evaluating patients with polyneuropathy. 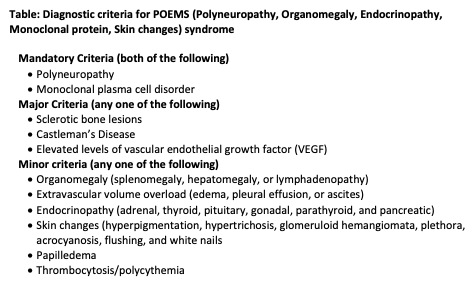 DELAYED DIAGNOSIS IN A CASE OF POLYNEUROPATHY: AN ALL-TOO-COMMON REFRAIN.