Case Presentation: Patient is a 48-year-old man who presented with dysphagia, weight loss and diffuse skin rash. He reported a large, non-tender lesion on his nose, and similar-appearing lesions on his thorax, extremities, face and mouth. The patient was diagnosed with HIV three years prior to presentation, but had never been treated with antiretroviral therapy (ART). On examination, diffuse, discrete purpuric, non-tender lesions (>50) were observed to be disseminated over the entire body. Hyperpigmented lesions and oral thrush were seen on the tongue and oropharynx. HIV viral load was 69,000 and CD4 count was 45. Biopsy of a cutaneous lesion revealed spindle cells and microhemorrhages, with positive staining for HHV-8, consistent with Kaposi Sarcoma (KS). Further infectious workup revealed co-infection with syphilis and CMV; tuberculosis negative. Shortly after admission, the patient developed scant hemoptysis and CT imaging demonstrated nodular densities scattered throughout both lung fields in a peribronchovascular distribution consistent with pulmonary KS. The patient was initiated on darunavir, ritonavir, dolutegravir and Descovy (tenofovir/alafenamide/emtricitabine). Several days later, was started liposomal doxorubicin was initiated. The patient’s hospital course was complicated by respiratory distress and worsening dysphagia requiring G-tube placement. Despite this initial clinical decline, pulmonary and cutaneous lesions demonstrated significant regression following six weeks of ART and systemic chemotherapy, and clinical symptoms improved.

Discussion: Given the rarity of disseminated KS with oropharyngeal or pulmonary involvement (less than 30% of cases of KS), providers must recognize the specific risks of inpatient management relating to the diagnosis and treatment of widespread disease. In this case, bronchial biopsy or PEG placement were deferred secondary to high suspicion for angioproliferative disease and risk of hemorrhage. Although the patient carried an overall poor prognosis (AIDS Clinical Trial Group T1, I1, S1), clinical criteria for initiation of systemic chemotherapy were met. With recent data demonstrating similar outcomes in ART with or without systemic chemotherapy, appropriate consultation for case-specific indications and timing of chemotherapy should be sought. Despite the severity of cutaneous disease, this case illustrates the dramatic improvement seen with initiation of combination ART and systemic chemotherapy.

Conclusions: In disseminated KS, special diagnostic and treatment considerations must be made, including indications for procedures, as well as appropriateness and timing of systemic chemotherapy. Even in the setting of critical illness, current therapeutic options can offer patients a remarkable recovery noticeable even during the same hospitalization. 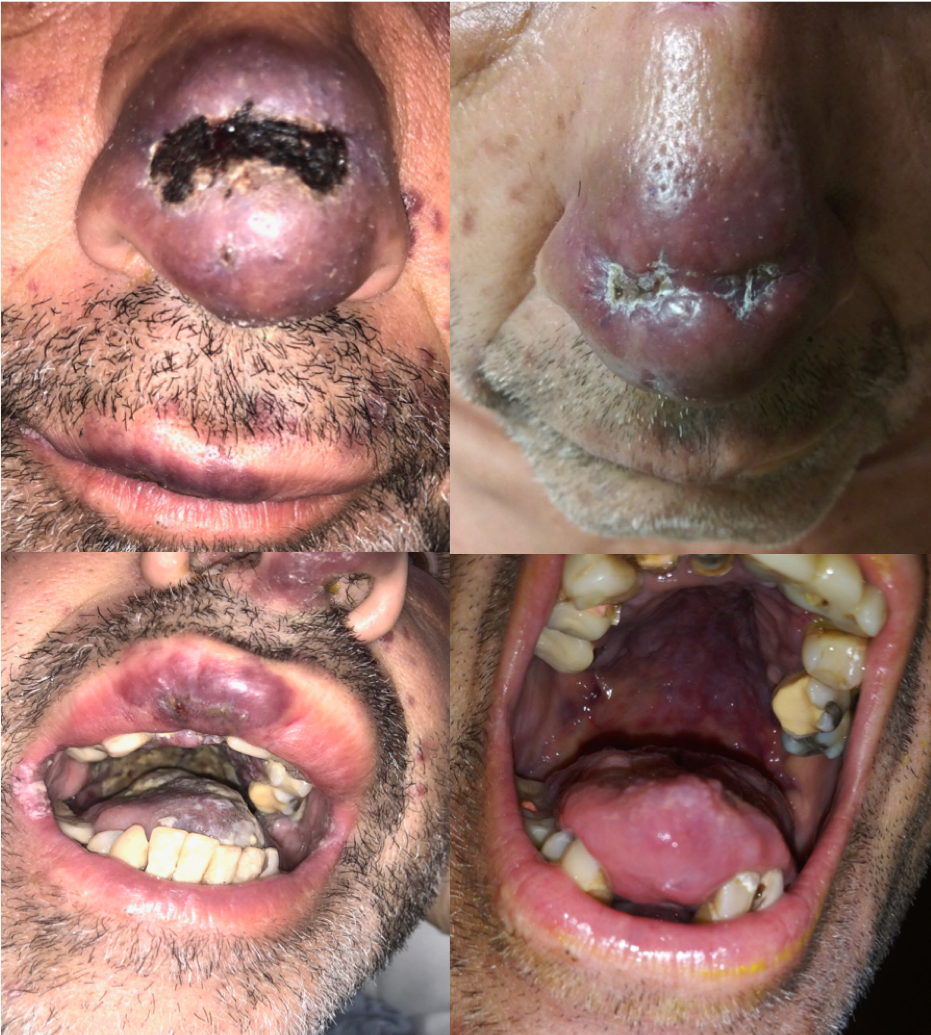