Background: Family centered rounds (FCR) was first defined by Sisterhen in 2007 as “interdisciplinary work rounds at the bedside in which patient and family share in the control of the management plan as well as in the evaluation of the process itself.”1 Since then, recognition of the benefits of FCR have led to widespread adoption. In 2012, the AAP recognized FCR as standard of care, stating, “In hospitals, conducting attending physician rounds … in the patients’ rooms with nursing staff and the family present should be standard practice.”2 Coordinating FCR to ensure nursing presence can be challenging, due to factors such as high census,3 and nurses being too busy.4 The effect of health care team (HCT) composition has not been well studied, with one qualitative study suggesting that smaller HCT could foster familiarity but large teams could offer multidisciplinary input.5 A variety of HCT models are used in pediatric residency training, with some institutions using the model of a single upper level resident with or without a medical student operating with more autonomy to provide experience in more independent decision-making. The effect of this resident team structure on FCR has not been studied.

Methods: After review of available literature regarding best practices in FCR and input from stakeholders including nursing staff, hospitalists, residents, and residency program directors, a web-based survey was created on SurveyMonkey.com (San Mateo, CA) to track the composition of the HCT present in each patient’s room during FCR. Information was also collected regarding the attending physician, primary nurse, resident team structure, and whether the primary nurse was contacted for FCR. The survey underwent alterations based on feedback from stakeholders after pilot testing, and data was reviewed from June 1 to October 31, 2017. Daily completion of the survey was the responsibility of the team senior resident for traditional teaching teams. “Manager” residents, who operated without interns and then “table-rounded” with attendings afterwards, were instructed to conduct family centered rounds on their own rounds in the morning, and then to complete the survey daily. Education regarding optimal FCR techniques was given with intern orientation, at the beginning of each teaching block, and during multiple resident education conferences, including grand rounds. The need for conducting FCR on all patients on all teams was reinforced at these venues also.

Results: A total of 993 surveys were completed during this time period. Question 3 (see Figure 1) was answered in 753 surveys. Of these, 229 surveys were completed by “managers.” Manager teams (see Figure 2) were found to have significantly lower rates than traditional teams of primary nurse, attending and family members presence during FCR (74% vs 83% primary nurse, 29% vs 91% attending, 74% vs 83% family member). Although lack of attending presence was expected based on the goal of manager residents operating with more autonomy, we found lower rates of primary nurse and family member attendance on FCR despite uniformity of instructions and reinforcement to all resident teams regarding the need for consistent FCR.

Conclusions: Resident teaching teams that consisted of a solo upper level resident operating with more autonomy decreased the rates of the primary nurse and family members being present on FCR. Further study of interventions that can improve rates of primary nurse and family member attendance on FCR in smaller HCTs that have more autonomy is needed. 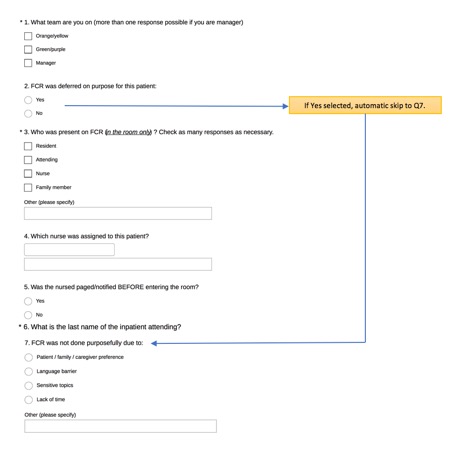 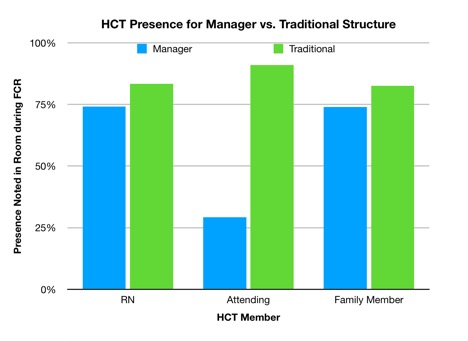 EFFECT OF TEACHING TEAM STRUCTURE ON RATES OF NURSING AND FAMILY ATTENDANCE DURING FAMILY CENTERED ROUNDS.