Case Presentation: 85 year old female was admitted on account of lethargy and decreased oral intake for the previous week, and evidence of anemia. She had undergone a transcatheter aortic valve replacement(TAVR) 5 months prior for her management of her severe aortic valve stenosis. Additionally, she suffered from recurrent gastrointestinal bleeding due to arteriovenous malformations, thought to be related to her valvular disease.(Heyde syndrome).Upon presentation she was febrile; temperature of 100.6 F, Heart rate was 87/min, Blood pressure: 121/56mmHg. She was not hypoxic. She was ill-appearing with a mild degree of pallor but anicteric. She had normal heart sounds with a 2/6 systolic murmur at her right upper sternal border. Chest: No wheezes or crackles. Abdomen: Soft and non-tender. Stools: heme-negative. CNS: Awake and alert. No motor deficits. EXT: no edema, clubbing, nodes or hemorrhages noted. Lab. data: WBC :18.1, Hb: 8 g/dL, AST 133 iu/L, ALT 80 iu/L, direct bilirubin 0.6 mg/dL, lactate 1.3 meq/L .Blood cultures were obtained and she was started on broad spectrum antibiotics. Her initial set of blood cultures returned positive for Enterococcus faecalis and she was placed on IV Vancomycin. Transthoracic echocardiogram revealed a well seated bioprosthetic aortic valve with a gradient of 31 mmHg but without any evidence of vegetations. Subsequent transesophageal echocardiogram demonstrated a 5 mm by 8 mm mobile density attached to the ventricular surface of the bioprosthetic aortic valve leaflet (Fig. 1) as well as a 6 mm by 16 mm echolucent space in the aortic root (Fig. 2), consistent with aortic root abscess.
Despite antibiotic therapy, she continued to be intermittent fevers, and subsequent blood cultures continued to grow Enterococcus. She was switched to IV Daptomycin. Her blood cultures cleared following 6 days of treatment with IV Daptomycin. The patient declined surgical intervention for source control and was ultimately discharged home on 6 week course of IV Daptomycin.

Discussion: Infective prosthetic valve endocarditis is a rare complication of TAVR with initial trials showing an incidence of 0.6- 0.8% at one year. The incidence of aortic root abscess following TAVR is even lower, with only six published cases of intra-cardiac abscess following a TAVR procedure. Prosthetic valve endocarditis (PVE) has a more insidious onset than native valve endocarditis.. Our patient presented with lethargy and loss of appetite, rather than the traditional symptoms associated with endocarditis. The only clues to her infection were the low-grade fever and leukocytosis. The diagnosis of PVE was considered only after her blood cultures grew Enterococcus. This is consistent with the theory that patients with PVE often do not present with “classic” signs and symptoms of infective endocarditis, partly due to the average age of the patient population. Typical causative organisms of PVE following TAVR differ from those in surgical aortic valve replacement (SAVR). The most common organism isolated from patients with PVE who have undergone TAVR is Enterococcus, as in our case.
Our patient’s history of recurrent gastrointestinal bleeding which may have been a nidus for enteric bacteria to enter the bloodstream.

Conclusions: Very few cases of intra-cardiac abscess following TAVR have been reported. TAVR is now a treatment option for patients with severe aortic stenosis at high surgical risk. As TAVR becomes a more common clinical practice, it is important for hospitalists to recognize its risks and possible complications. 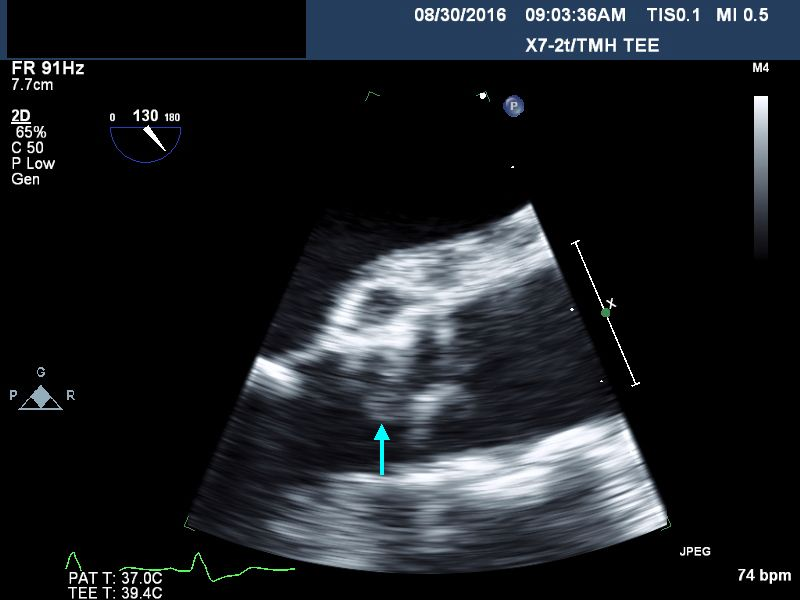 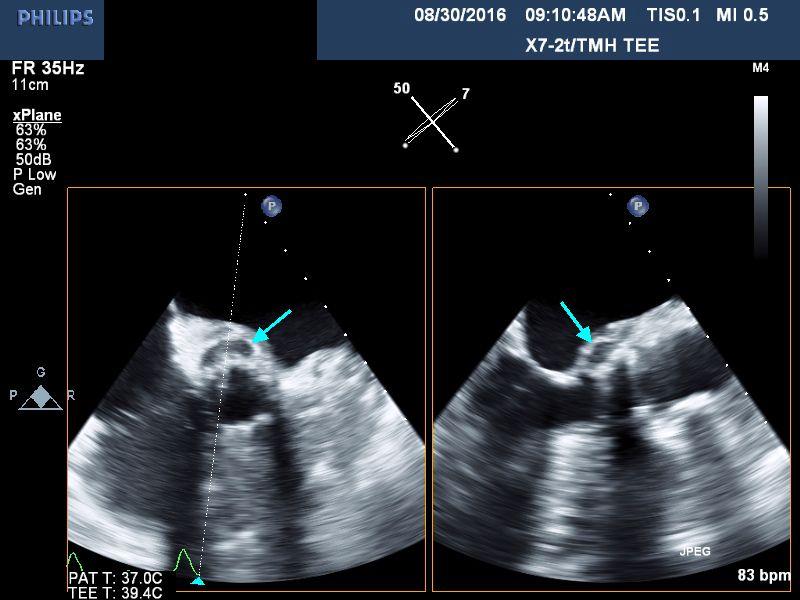