Background: Atrial fibrillation (AF) is strongly age-dependent, and with a growing geriatric population, the incidence and prevalence of AF is expected to increase in the United States. As a result, the number of patients at risk of a thromboembolic event due to AF is also expected to increase. Although bleeding associated with mechanical falls is a major reason preventing an elderly patient from being on anticoagulation, the patient would have to fall 300 times/year for the risk of bleeding complications from falling to outweigh the benefits of prevention of thromboembolic stroke. Using data from a large health system, we examined the predictors of anticoagulation prescription during discharge in elderly patients with AF after in-hospital fall.

Methods: We included patients 60 years and above discharged from 2013 to 2018 with a diagnosis of AF and a secondary diagnosis of in-hospital fall during that admission. We excluded patients with subarachnoid hemorrhage, gastrointestinal bleeding or other contraindications to anticoagulation. We described demographics including race/ethnicity, gender, age group (60-69, 70-79, 80-89, 90+), and insurance status. We also examined clinical characteristics including being on a resident team, cardiology consult, CT head performed after the fall, ambulation status (independent, walker, or wheelchair), discharge location after physical therapy evaluation (home, rehab, or nursing home) and calculated CHA2DS2-VASc score for each patient. The primary outcome was prescription of anticoagulation during discharge. We first stratified the study sample by whether or not patients received a cardiology consult during hospitalization and then by anticoagulation prescription upon discharge. Among patients with a diagnosis of AF, we ran multivariable logistic regressions to identify predictors of anticoagulation prescription upon discharge. 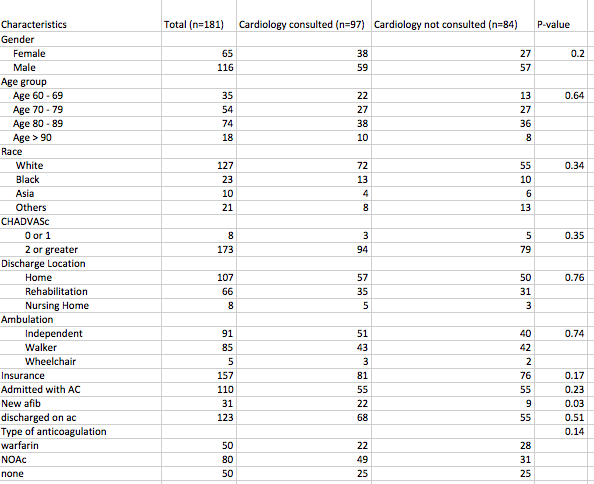 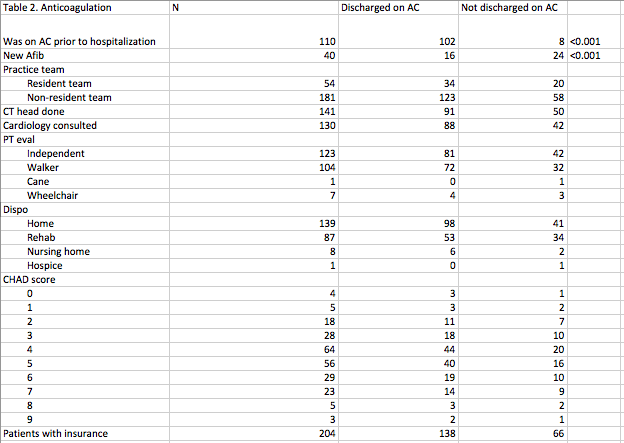 EXAMINATION OF ANTICOAGULATION PRESCRIPTION AMONG ELDERLY PATIENTS WITH ATRIAL FIBRILLATION AFTER IN-HOSPITAL FALL.