Fishing for a Diagnosis

A 48‐year‐old Chinese man reported a 1‐day history of paresthesias, shortness of breath, anxiety, and profound total‐body weakness. The evening prior to presentation he had prepared some dried blowfish that he had brought from China by rehydrating it in broth and cooking it thoroughly. Shortly after eating, he developed circumoral numbness and tingling. He became diaphoretic, pale, and began breathing quite heavily, which progressed to total‐body numbness associated with profound anxiety. He later developed stiffness of the jaw and tongue. He phoned his cousin, who attempted to reverse these symptoms with traditional Chinese medications and massage prior to calling emergency medical services, which found him to be in respiratory extremis. Physical exam revealed a pale‐appearing, diaphoretic man in moderate distress with a respiratory rate of 36 on a 100% nonrebreather. He was able to phonate but unable to speak full sentences. Neurologic examination revealed asymmetric sensation to light touch over the face, with increased paresthesias on the right. He was unable to sit up from a lying position without a 2‐person assist, and his lower extremities could not support his weight to stand. Laboratory analysis was significant for venous blood gas showing respiratory alkalosis and mild lactic acidosis. Electrocardiogram revealed sinus tachycardia. Based on history, we strongly considered the diagnosis of tetradotoxin (TTX) poisoning. He underwent gastric lavage with activated charcoal, followed by large‐volume administration of polyethylene glycol in an effort to purge all toxin from the gut. He was admitted with telemetry and frequent pulse oximetry monitoring, with neurologic checks hourly. No arrhythmia was noted, and he did not require mechanical ventilation. He subsequently weaned to room air and regained strength. On discharge 2 days later, he was able to navigate 12 stairs independently, with residual symptoms of minimal dizziness and blurred vision. He was discharged with 24‐hour assistance from family. 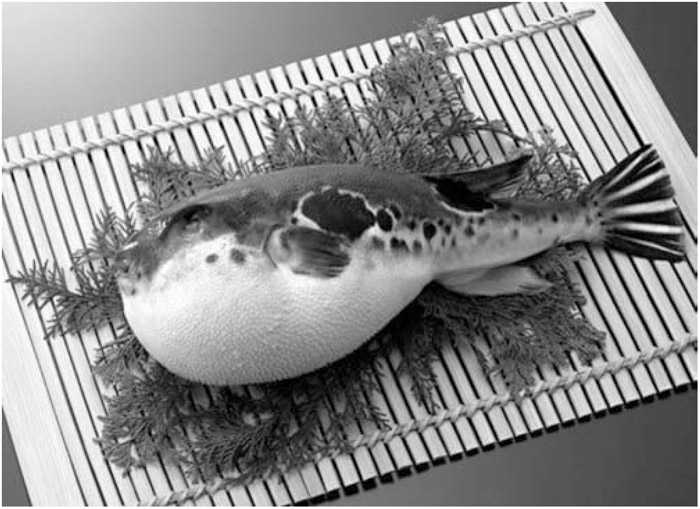 The organs of the puffer fish can contain levels of tetrodotoxin sufficient to produce paralysis of the diaphragm and death from respiratory failure.

TTX is found in blowfish and leads to binding of the pores of sodium channel proteins and nerve cell membranes. TTX does not cross the blood–brain barrier, leaving the victim fully conscious while paralyzing the muscles. Common symptoms include dizziness, exhaustion, headache, nausea, and difficulty breathing. In 50%–80% of victims, breathing stops and asphyxiation follows within 24 hours. However, if the victim survives, he usually recovers completely. There is no known antidote to TTX poisoning, and treatment generally consists of emptying the stomach, feeding the victim activated charcoal to bind the toxin, and taking standard life‐support measures until the poison has worn off.

The purpose of reporting this case is to highlight this extremely rare but life‐threatening disease. Only a few cases have been reported in the United States. As worldwide travel increases, we should be cognizant of what types of global phenomena to consider on a patient's return.

Fishing for a Diagnosis.