HOW ORIGINAL: CHARACTERIZING THE SOURCE OF TEXT IN PROGRESS NOTES

The original goal of progress notes is to provide a concise, up-to-date reflection of the patient’s condition and the provider’s thought processes.  Electronic health records (EHRs) allow physicians to supplement traditional manual data entry with copied or imported text in these notes. However, this increases the risk of including outdated, inaccurate, or unnecessary information, sometimes undermining how much a note’s information can be used for clinical decision making.

Previous analyses found significant copying in up to 82% of EHR clinical notes.  However, they could not separate manually entered text from other “dynamic” text that changes daily, such as 24 hour vitals.  The specific identification of manual text gives a more accurate characterization of how much active thought a provider invests in a note.  We used a new tool that separates manual, copied, and imported text in notes to describe documentation practices in medical students, residents, and direct care hospitalists.

This study took place at a large academic medical center using an inpatient EHR from Epic Systems Corporation. We analyzed inpatient progress notes written by direct care hospitalists, residents, and medical students on general medicine over an eight month period. Only note text written by primary authors was analyzed; addendums and attestations to resident and medical student notes were excluded.

The total number of characters in a physician note that are manually entered, copied, or imported are captured by our EHR. Copied characters are “copied forward” from a users’ previous note or copied from another source, such as imaging results. Imported characters are pre-populated text from Epic’s templates or imported dynamic values such as laboratory results or vitals.  The percentage makeup of each individual note was calculated from these counts and used for aggregate analysis.  The non-parametric Kruskal-Wallis test was used to examine differences between provider types.

This study uniquely analyzes the provenance of progress note text with character-level granularity. Notably, less than one-fifth of note content was manually entered. Further study is needed to understand the purpose of the remaining non-manual text; billing, legal considerations, and capturing clinical course, are likely contributors. 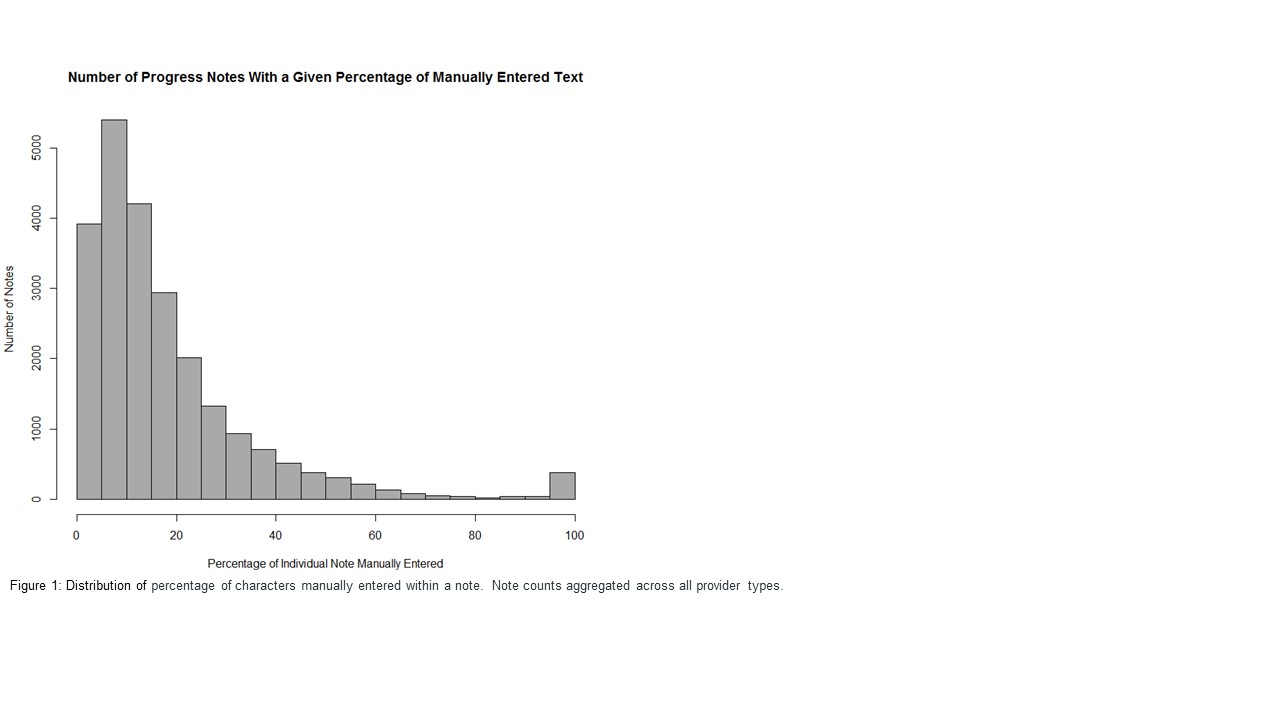 HOW ORIGINAL: CHARACTERIZING THE SOURCE OF TEXT IN PROGRESS NOTES.