Case Presentation: A 40-year-old female with adult-onset Still’s disease (AoSD) refractory to methylprednisolone and who had been recently started on anakinra 2 months prior to hospitalization was admitted with 2 weeks of fatigue, nausea, diffuse pruritis, jaundice, and intermittent fevers and rash. Exam was notable for jaundice and salmon-colored rashes on her trunk and back. Initial labs showed normal electrolytes and renal function, ALP177 U/L, AST 1148 U/L, ALT 1191 U/L, total bilirubin 6.8 mg/dL, and INR 1.75, consistent with a severe, acute hepatocellular liver injury. Abdominal ultrasound with Doppler showed normal-appearing liver and spleen, portal and hepatic veins, and common bile duct. Serologies for viral hepatitis A, B, C, and E, CMV, EBV, HSV, and autoimmune hepatitis were negative. Anakinra was discontinued due to concern for hepatotoxicity and she was started on continuous intravenous N-acetylcysteine. Liver biopsy showed massive hepatic necrosis, dense lymphoplasmacytic lobular inflammation, and prominent hemophagocytosis, consistent with an immune-mediated injury (Fig 1). Further laboratory workup was notable for elevated ferritin, hypertriglyceridemia, and hypofibrinogenemia concerning for hemophagocytic lymphohistiocytosis (HLH) triggered by her AoSD. However, the bone marrow biopsy showed no hemophagocytosis. She was started on pulse-dose intravenous methylprednisolone on hospital day 9. On hospital day 10, she developed new-onset of altered mental status that rapidly worsened required endotracheal intubation, as well as hypoglycemia, hyperammonemia, and worsening liver function (Fig 2) consistent with acute liver failure. She was transferred to a liver transplant center and underwent emergent liver transplantation three days later. Liver explant showed massive hepatic necrosis. She was discharged home on post-transplant day 40.

Discussion: AoSD is a systemic inflammatory disease that manifests with fevers, rash, and joint pain. Modest elevations in aminotransferases and ALP are relatively common in AoSD, but rare patients have developed acute liver failure [1,2]. Anakinra is a first-line treatment for patients with severe flare of AoSD despite corticosteroids. Anakinra-associated hepatotoxicity has been reported previously, including cases of subacute liver failure that resolved after discontinuation of anakinra [3,4]. This patient had evidence of an acute hepatocellular liver injury that progressed to acute liver failure requiring emergent liver transplantation, with the differential diagnosis including drug-induced liver injury (DILI) secondary to anakinra versus hepatic involvement by AoSD. She did not meet the diagnostic criteria for HLH. The timing of her liver injury was highly suspicious for DILI, but she also had a concurrent flare of AoSD indicating the activity of the disease itself. Liver biopsy and explant pathology were consistent with an immune-mediated injury but could not differentiate between DILI and hepatic AoSD.

Conclusions: In patients with a systemic inflammatory disease such as AoSD that can affect the liver, it can be challenging to differentiate between hepatic involvement by the disease and immune-mediated, idiosyncratic hepatotoxicity from pharmacologic treatments such as anakinra. Patients with AoSD being treated with anakinra should have liver tests monitored closely. Treatment should be promptly discontinued if there is evidence of liver injury to prevent potentially life-threatening acute liver failure. 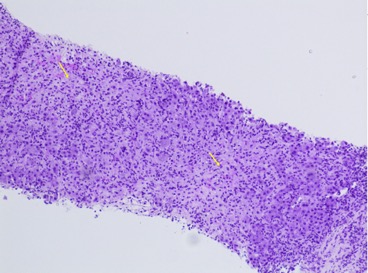