IN THE EYE OF THE BEHOLDER: B-CELL LYMPHOMA MASQUERADING AS ORBITAL CELLULITIS

60 year old African American man with history of HTN, HLD, and mitral valve regurgitation presented to the ER complaining of 2.5 weeks of progressively worsening right eye pain and swelling. He originally saw his primary care physician, who prescribed him eye drops. However, the swelling got worse, so his PMD referred him to an optometrist, who prescribed him PO doxycycline. However, the swelling continued to worsen. When he woke up in the morning, he could barely open his eyelid, so he sought care at our ER. Pt denied any associated fevers or chills. Physical exam revealed a right eyelid that was nearly swollen shut. However, patient had intact vision and extraocular movements in both eyes. There was a lot of swelling of his eyelids, but no redness or tenderness. The conjunctiva were not injected. The remainder of the exam was significant only for tachycardia and a 3/6 systolic murmur. Laboratory results were significant for a WBC of 33,000, Hgb 11.4, and MCV 101. ESR was 24 and CRP was 13.4. BMP and CBC were otherwise unremarkable. HIV was negative. CT scan in the ER showed periorbital inflammation with posterior extension, concerning for orbital cellulitis. The patient was started on vancomycin and Zosyn. The patient was seen in the ER by ophthalmology, who recommended medical management for presumed cellulitis. Despite antibiotic treatment, the patient’s eye swelling began to increase. He developed worsening right eye pain and proptosis, with decreasing vision and rising intraocular pressure.  A stat MRI of the orbits was done, and it revealed retinal deposits in both eyes with some flair hyperintensity, concerning for lymphoma. The patient was taken urgently to the OR by ophthalmology, who performed a right anterior orbitotomy with exploration and biopsy of the right orbital mass. New labs showed an LDH of 2975 and 10% circulating blasts on smear. Heme/onc was consulted, and the patient was transferred to the oncology service. Pathology from the eye surgery revealed a high grade B-cell lymphoma. Bone marrow biopsy showed hypocellular bone marrow involved by B-cell leukemia / lymphoma. FISH testing revealed MYC gene rearrangement, IGH-BCL2 translocation, and BCL6 gene rearrangement. There was no evidence of BCR/ABL1, PML/RARA or CBFB rearrangements. PET CT showed evidence of systemic lymphoma. The patient was started on chemotherapy regimen DA-EPOCH.

Lymphomas of the orbit make up only 1% of non-Hodgkin’s Lymphoma. B-Cell is the most common lymphoid tissue type. About one third of cases have systemic involvement. Periorbital swelling and proptosis are the most common signs. A significant number of patients will not have pain. Radiation and/or chemotherapy are the mainstays of treatment, and the majority of patients will have a favorable clinical response. The estimated 5- and 10-year survival rates in a recent review were 64% and 42%, respectively.

Lymphoma should be on the differential for any patient presenting with proptosis and periorbital swelling. It can easily be mistaken for more common diagnoses, such as lacrimal duct obstruction or preorbital/orbital cellulitis. The persistence of symptoms, absence of pain, and lack of erythema and tenderness on exam should arouse suspicion for this masquerading malignancy. 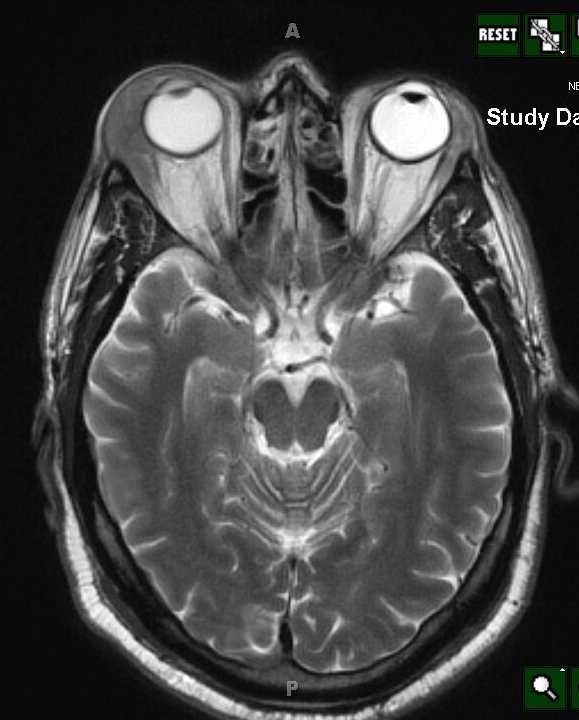