Case Presentation: A 17-year-old male presented with 1 month of intractable hiccups, disturbing his sleep, and right-sided paresthesias, starting in his right upper extremity, localized to the 4th and 5th digits, then gradually spread to his bilateral lower extremities. He denied heavy lifting, fever, muscle weakness, back pain, or bladder/bowel incontinence. He first presented to an outside hospital where a CT head and neck, chest X-ray, CBC, BMP, ESR, TSH were unremarkable. He was discharged with oral steroids, but symptoms persisted. On our exam, he was well-appearing, had insuppressible hiccups every 2 seconds, normal CN II-XII, preserved temperature sensation, preserved pinprick with the exception of the right great toe eminence, severely diminished vibration sense in the right lower extremity, diminished light touch on the volar and dorsal surfaces of the 4th and 5th fingers of the right hand, and a very mild decrease in muscle strength and reflexes in the right upper extremity. His neck had full range of motion but was mildly tender to palpation in posterior right occiput. He had a leukocytosis of 21.6 x10*3/uL, but otherwise repeat labs were within normal limits. MRI spine revealed a 9.5cm hemorrhagic spinal cord lesion extending from the medulla through C4-C5. He was started on dexamethasone and neurosurgery was consulted. Although they did not operate immediately, the patient later developed headaches and vomiting and at that time underwent a sub-occipital craniotomy and C1-2 laminectomies for lesion/cavernoma resection without any complications.

Discussion: While hiccups are believed to be caused by an interaction between the medulla oblongata, reticular formation, phrenic nerve nuclei, and hypothalamus, the function and specific causes of hiccups remains unclear. Hiccups are common and almost exclusively last less than 48 hours. Instances of intractable hiccups have been reported with varying etiologies including structural abnormalities (such as syringomyelia in the context of Chiari type I malformation involving the craniovertebral junction ), infections, medication side effects, inflammatory disorders, vascular causes (such as a PICA aneurysm ) or erosive esophagitis causing nerve irritation. We must keep a wide differential when patients present with intractable hiccups and connect these with other symptoms. As in this case, concurrent neuropathies or paresthesias may serve as a diagnostic clue. A detailed history can help distinguish between various causes, but the use of CT and/or MRI imaging and other diagnostic interventions such as lumbar puncture may also be clinically indicated. Often a single etiology is never determined, and symptomatic treatment interventions may retrospectively indicate original cause.

Conclusions: This case demonstrates the responsibility of the evaluating physician to investigate all of a patient’s symptoms fully, even if they may appear benign. This requires a broad differential. Although prioritization of time and resources needs to be strategically implemented, it is imperative to avoid anchoring bias or premature closure which could result in patient morbidity and mortality. Hiccups may appear nonthreatening and it would be easy to treat symptomatically. However in this patient, if that approach had been taken solely, potentially lifesaving means would not have been undertaken. 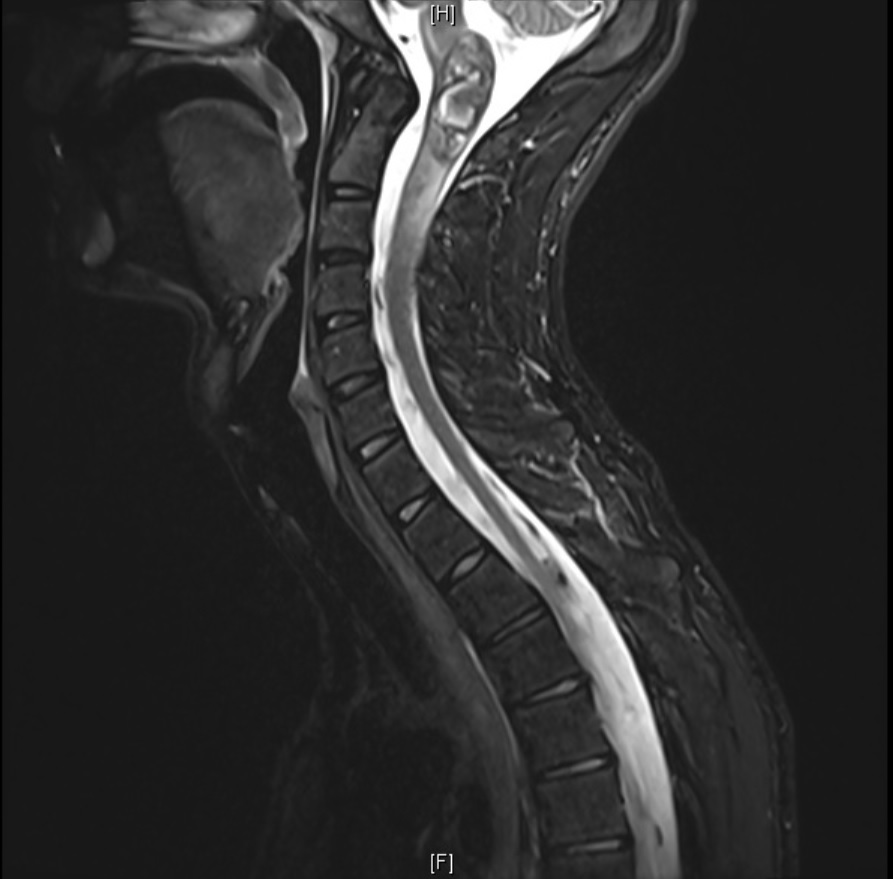 INTRACTABLE HICCUPS AND RIGHT-SIDED PARESTHESIAS AS THE PRESENTING SYMPTOM OF A CERVICOMEDULLARY HEMORRHAGIC LESION.